Since the beginning of March, three of the four largest U.S. airlines have slashed their first-quarter unit revenue guidance, blaming a slowdown in demand for last-minute tickets. Of the major carriers, only American Airlines expects to report unit revenue growth for Q1. It currently projects that revenue per available seat mile (RASM) rose 2%-4% last quarter.

By contrast, Hawaiian Holdings (HA -2.14%) continues to sail along, as demand for travel to Hawaii remains as strong as ever. Hawaiian Airlines posted the best unit revenue results in the industry last year, and it's well positioned to repeat that performance in 2017.

Between 2010 and 2013, Hawaiian Airlines embarked on an ambitious expansion plan that drove its revenue up from $1.18 billion in 2009 to $2.16 billion in 2013. However, it wasn't all smooth sailing. Hawaiian entered a slew of new markets during that period, and some didn't live up to the company's expectations. Meanwhile, rising competition constrained its unit revenue growth in the core West Coast-Hawaii market. In the past few years, Hawaiian Airlines has exited some of its underperforming international markets. Others have gradually matured as consumers' interest in traveling to Hawaii has increased. In the domestic market, competitive capacity growth has finally slowed.

As a result, Hawaiian Airlines is now outperforming its peers. In 2016, it was the only U.S. airline to post unit revenue growth, with a 2% full-year RASM increase. This helped Hawaiian Holdings produce adjusted earnings per share of $5.19 last year: up from just $0.88 in 2013.

While other airlines are still struggling to get unit revenue growing consistently, Hawaiian Airlines appears to be gaining momentum. In January, it reported that RASM rose 6% in the fourth quarter. At that time, management projected that RASM would rise by a relatively comparable 4%-7% during Q1.

However, Hawaiian Airlines raised its first-quarter RASM forecast on Monday. It now expects to report a stellar 6.5%-8% RASM gain this quarter, putting it well ahead of American Airlines -- let alone the other airlines that still haven't returned to unit revenue growth.

It's not surprising that Hawaiian Airlines has become a passenger-preferred airline. It is the only U.S. airline that still serves a meal at mealtimes on every flight. It also offers an authentic Hawaiian experience onboard, effectively allowing customers to start their vacations early. Moreover, the carrier is in the midst of a project to add more extra-legroom seating while upgrading its first class seats to flat beds on its A330 fleet.

Hawaiian Airlines shares rallied following the unit revenue guidance update on Monday. Nevertheless, the stock remains more than 20% below the all-time high it reached in late 2016.

This underperformance can probably be traced to investors' worries about Hawaiian's rising costs. Entering the year, management forecast that the company's non-fuel cost per available seat mile (CASM) would increase at a mid-single-digit rate in 2017. Since then, Hawaiian has signed a new pilot contract, which will add $25 million-$30 million of incremental costs this year (excluding one-time payments).

As a result, Hawaiian now expects its adjusted non-fuel CASM to rise 6%-8% year over year this quarter. It's on pace for a similar increase on a full-year basis. Fuel efficiency is also declining, because Hawaiian is removing some seats from its A330s to make room for the new flat-bed seats and the expanded extra-legroom section. 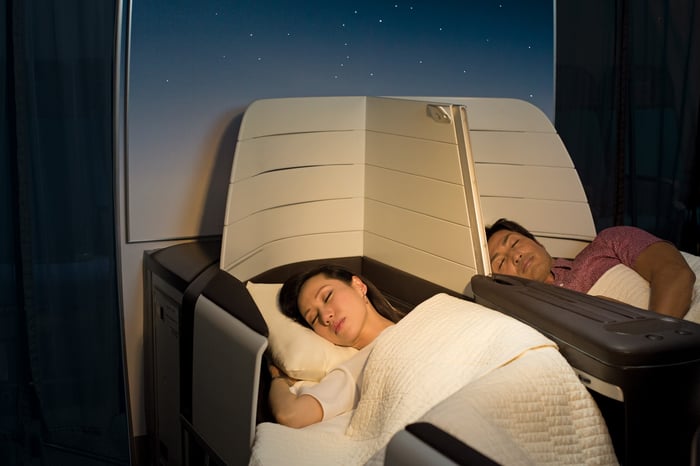 However, the company's strong unit revenue growth will offset most of these cost increases. Furthermore, some costs being incurred in 2017 represent investments that could lead to lower unit costs going forward.

Most notably, Hawaiian will incur various training costs related to its new A321neo fleet during 2017, but it doesn't expect to begin operating those planes until early 2018. Yet in the long run, the A321neos should reduce unit costs dramatically relative to the aging Boeing 767s that they will replace.

Investors may have soured on Hawaiian Holdings shares in the past few months. But the company remains on track to become one of the most profitable airlines in the world. That should drive a stock price recovery sooner or later.