Please ensure Javascript is enabled for purposes of website accessibility
Log In Help Join The Motley Fool
Free Article Join Over 1 Million Premium Members And Get More In-Depth Stock Guidance and Research
By Rick Munarriz - Apr 11, 2017 at 8:07AM

A Wall Street pro came to the rescue for Skechers (SKX 0.53%) to snap a streak of eight consecutive trading days of lower closing prices on Monday. As fate would have it, the savior is also the one who probably triggered the initial sell-off.

Susquehanna analyst Sam Poser upgraded the reeling shares of the leading maker of walking footwear this week. He is boosting his rating from "negative" to "neutral." Poser thinks Skechers stock is fairly valued at this point, slapping it with a $25 price target. Susquehanna's analyst realizes that there are near-term challenges at Skechers -- specifically with its struggling domestic wholesale business -- but the recent sell-off finds him stepping back from his bearish call.

The analyst update came as a refreshing surprise, sending the stock 2% higher in Monday's trading. That's a poetic update. If we roll back to two Wednesdays ago, when the eight-day streak of losses began, that day kicked off with Poser downgrading the stock. 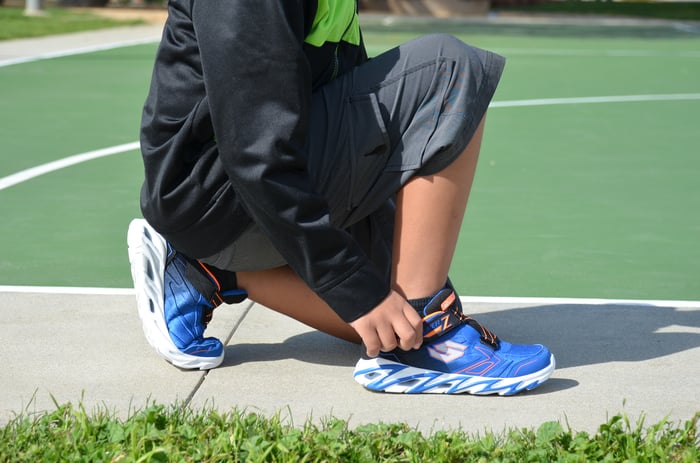 Poser's bearish call two weeks ago and today's upgrade aren't bookends to a cruel eight trading days that shaved away 17% of the stock's value. The symmetry isn't right, as Poser's call two weeks ago was to lower his rating on the stock by two notches, going from "positive" to "negative." Taking two steps back and only moving up one doesn't make for a fair trade.

Poser is also reacting opportunistically to the stock's double-digit slide since he turned bearish late last month. He's not having a change of heart when it comes to fundamentals. His concerns remain from two weeks ago -- namely, channel checks show retailers as being more enthusiastic about stocking rival brands.

Skechers has posted three consecutive quarters of year-over-year declines in its domestic wholesale business. Strength overseas and at its namesake stores have been enough to offset the declines on the stateside wholesale front, but it remains a challenge for the stock that until sliding last year had been a market darling. Poser's double downgrade last month had him slashing his U.S. wholesale sales forecast from 7% this year and 7.6% in fiscal 2018 to just 2.5% in fiscal 2017 and 4% next year.

We'll get a clearer picture later this month, when Skechers reports its first-quarter results. Back in February, Skechers was targeting a dip in profitability of 7% to 10% in top-line growth. If Poser is right that trends are generally working against Skechers, that would translate into a weaker performance and a rough outlook. Bulls will be grateful to see an end to a rare string of lower closing prices for eight consecutive trading days, but it will be up to Skechers and its quarterly financial update to dictate which way the stock heads later this month.