Here's why our team of contributors thinks Pfizer, Welltower, and Amgen are all terrific healthcare dividend stocks to buy right now.

The demand for healthcare tends to remain steady even during periods of economic chaos. That's a big reason the sector is often viewed as a safe haven for income-focused investors.

So, which dividend stocks do our healthcare experts have their eye on right now? Read on to see why Pfizer (PFE 0.99%), Welltower (WELL 1.15%), and Amgen (AMGN 0.01%) have captured their attention. 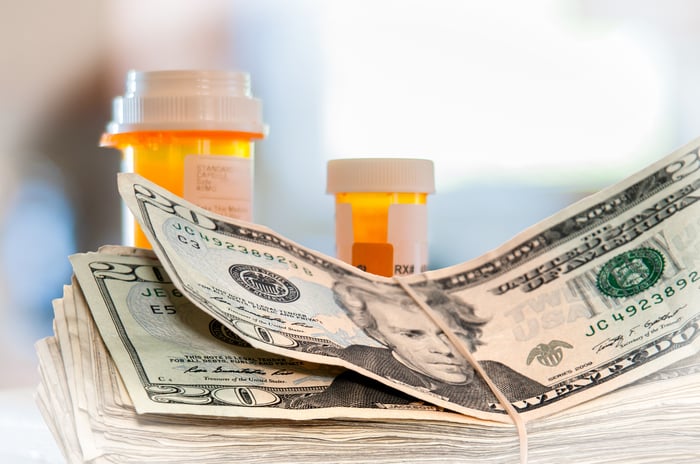 This Big Pharma is a cash cow with a sustainable dividend

George Budwell (Pfizer): If you're on the hunt for a top dividend stock within the healthcare sector, I think Pfizer is always worthy of consideration. Besides having a stellar clinical pipeline that sports over 90 product candidates in development and a mountain of cash (more than $17.8 billion) on its balance sheet, Pfizer has now paid a dividend for 313 consecutive quarters. Last December, the company achieved this lofty milestone while also announcing a 7% hike to its quarterly payout, bringing its annual yield up to a healthy 3.75%.

While the drugmaker's current yield doesn't exactly occupy the top tier of dividend-paying pharma stocks, it is better than the average yield for major drug manufacturers, which has consistently hovered at around 3.45% over the past five years or so. Moreover, Pfizer's 12-month trailing payout ratio of 102% -- while high in absolute terms -- pales in comparison to the prevailing norms within its peer group. The average trailing payout ratio among major drug manufacturers, after all, stands at over 200%.

Looking ahead, Pfizer's sizable payout ratio should also start to come down over the next few years due to the launch of several new potential blockbuster therapies. Specifically, the company is in the midst of rolling out its next-generation immuno-oncology drug avelumab for Merkel cell carcinoma (a rare form of skin cancer), and ertugliflozin is close to entering the market as a new class of therapy for type 2 diabetes.

The key takeaway is that Pfizer offers a better-than-average yield that appears to be sustainable for the long haul.

Brian Feroldi (Welltower): Real estate investment trusts (REITs) that focus on healthcare properties are sitting pretty right now. The world's population is rising, which means that the demand for high-quality medical facilities is likely to grow over time.

Welltower is a healthcare-focused REIT that looks well positioned to benefit from this trend. The company owns a diverse empire of roughly 1,400 properties that are spread throughout the U.S., U.K., and Canada. Welltower's facilities primarily provide essential services for senior citizens -- think memory care, assistant living, and independent living -- but the company also owns post-acute care centers and outpatient medical buildings.

Though all of Welltower's facilities benefit from predictable demand and stable tenants, management has been actively been paring back its buildings that have high exposure to public payers such as Medicare and Medicaid in favor of those funded primarily by private payers. This move is to designed to reduce the company's long-term risk to changes in reimbursement rates from public payers. Given all of the rhetoric surrounding healthcare for politicians, this is a move that I, for one, applaud.

While portfolio shuffling is likely to weigh on the company's profit growth in the near term, Welltower over the long term appears to have plenty of room left for expansion. When combined with modest rent increases and growing demand for the company's properties, Welltower should easily be able to continue its 45-year long streak of paying out a healthy dividend. With shares currently yielding 4.8%, I think this healthcare dividend stock is tough to beat.

Sean Williams (Amgen): When I think of the top dividend stocks in biotech, I'm instantly drawn to the original biotech blue-chip stock, Amgen.

Amgen only began paying a quarterly dividend to investors in 2011, but its payout has grown at an exceptional rate since then. After paying a $0.28-per-share stipend in the summer of 2011, Amgen is now divvying out $1.15 per share per quarter, a 311% increase in just six years and currently good enough for a market-topping 2.8% yield.

The secret to Amgen's healthy payout has been a combination of three factors: a healthy pipeline, cost controls, and pricing power.

It's well-known that drug developers thrive on late-stage clinical data, and Amgen has delivered positive results in a number of key studies over the past three years. One of its more intriguing newer therapies is Repatha, an injectable medication designed to reduce LDL cholesterol (the bad kind) in patients with certain genetic diseases and in those who've had heart attacks or strokes and need the extra help to lower their cholesterol. A long-term study released last month on Repatha found it reduced the risk of heart attack and stroke by 27% and 21%, respectively. Though Repatha is considerably pricier than traditional statin medications, this data could persuade physicians to prescribe the potential blockbuster drug as the next-generation treatment for high LDL cholesterol.

Second, Amgen hasn't been afraid to trim the fat, so to speak. Prior to launching around a half-dozen new therapies in recent years, Amgen cut 4,000 jobs, or roughly 20% of its workforce. It wasn't so much that Amgen was looking to cut costs so much as it was diverting some of its savings into the costs to run phase 3 trials and launch newly approved therapies. However, the mix of newly launched drugs and lower employee expenses has resulted in an operating margin that continues to grow. In 2016, Amgen's operating margin grew 430 basis points to 52.3% on an adjusted basis.

Finally, Amgen can thank its bountiful pricing power for its success. The U.S. has a number of inherent advantages that allow drugmakers to thrive, and Amgen has been fortunate that pricing increases have carried its top-selling drug Enbrel for quite some time. Though Enbrel's pricing power is expected to wane moving forward, Amgen's oncology portfolio should still pack a pricing punch.

Long story short, Amgen remains a cash cow in the biotech industry, and its dividend looks poised to keep growing.