Not even Nike can avoid the current retail plague of lower store traffic. But this could be a good opportunity for investors.

While Nike (NKE 0.80%) was not able to avoid the industrywide problem of low traffic haunting retailers today, its fiscal third-quarter earnings report demonstrated that management is doing the right things to position the company for long-term growth beyond the industry's short-term challenges.

All in all, Nike's quarter was quite solid in the context of a complicated retail environment. 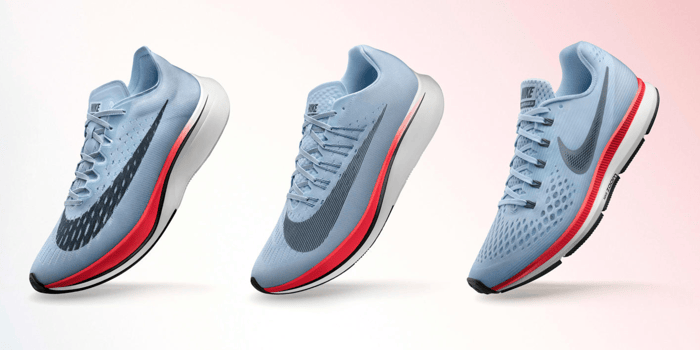 Nike revenue suffered from lower traffic in stores and a heavy promotional retail environment causing sluggish top-line growth of only 5% for the quarter -- not much different than the 6% in the first nine months of fiscal 2017.

Gross margin declined 140 basis points to 44.9% due to higher costs associated with the industry's promotional activity as well as currency headwinds. Nike offset some of the gross margin contraction with higher average selling prices and manufacturing improvements.

Management kept a tight lid on overhead expenses, which allowed the company to generate 20% growth in net income. The reduced share count from share repurchases propelled earnings per share at an even faster rate of 24% growth for the quarter.

CEO Mark Parker attributed the company's soft revenue performance to consumers' shift to digital shopping as opposed to in-store: "The consumer has decided digital isn't just part of the shopping experience, digital is the foundation of it. This and other factors have shifted consumer patterns, especially in North America, impacting traffic, the economics of brick-and-mortar retail...and is driving a more promotional environment in the near term."

As e-commerce continues to grow, people's expectations of the shopping experience are changing. The convenience of online shopping, particularly Amazon.com's Prime service, is spoiling us, to be frank. In the long run, the companies that are successful in developing a customer-friendly shopping experience through online, mobile, or in-store will survive this digital transition.

Nike has been developing its direct-to-consumer channels for a while. The company's mobile apps are generating a larger share of its growth, but Nike is still very dependent on a physical store presence across its own branded stores and its wholesale customers like Foot Locker.

The company may have already discovered a blueprint for succeeding with its new SoHo store. Nike+ members who visited Nike's new store spent three times more due to new service offerings. Customers received a one-to-one personal service as well as other benefits like the offer to trial new products, invitations to join training clubs, and quicker access to the product they want.

Nike will be sharing its own personalized service successes with wholesale partners around the world. The success of the SoHo store shows customers want a more convenient and personalized shopping experience -- and it's universal, as other stores in Miami and Beijing demonstrate the same success with personalized shopping. CEO Mark Parker described what he believes is the correct antidote to the in-store retail problem: "More personal...more mobile...more distinctive...these are the dimensions that will drive growth. I'm convinced, now is the time to rewrite the playbook of retail."

Nike is in a good position to survive the shift in consumer spending patterns because of its status as one of the most recognized brands in the world. Ultimately, customers will seek the best brands and products, especially as those brands develop a streamlined mobile and online shopping experience, as Nike is doing.

To continue attracting customers, Nike is following the same course that raised its brand to iconic status -- innovation.

Nike is continuing to produce new advancements in cushioning systems with its running shoes. The company is launching the Nike Zoom Vaporfly 4% running shoe which targets marathon runners. The "4%" in the title implies the increased efficiency in the Vaporfly's performance over Nike's previous marathon shoe.

Later in the year, it will also release new cushioning systems in "radical new forms that helps runners and basketball players increase their performance and stay fresh, longer," as CEO Mark Parker explained.

Nike has a list of new advancements coming out later in the year for its other products such as Hyperadapt 1.0, Flyknit, and FlyEase technology.

Facilitating a rapid series of new product advancements is management's effort to streamline the manufacturing process. Nike is cutting the average product creation cycle by half. As a result, new styles and products will reach customers in weeks instead of months.

In addition, the company is using advanced knitting and higher-precision cutting technologies to reduce excess costs. CEO Mark Parker said, "We're seeing a positive impact to gross margins in the tens of millions and we expect that to continue to accelerate."

Another important operational adjustment is the company's "Edit to Amplify" approach to streamline the number of products Nike develops. Currently, Nike is generating 99% of sales with 75% of its styles. This means about 25% of Nike's products represent, essentially, a wasted effort. Management is cutting out excess styles and focusing more on the products customers love the most. 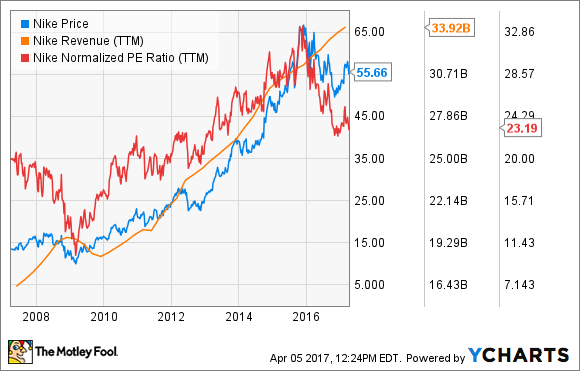 As shopping patterns change, Nike is taking the right steps to control costs and deliver customers a much more streamlined shopping experience across online, mobile, and in-store. Nike has one of the most valuable brands in the world, so I see short-term weakness in the stock price as a long-term opportunity for investors.