Please ensure Javascript is enabled for purposes of website accessibility
Log In Help Join The Motley Fool
Free Article Join Over 1 Million Premium Members And Get More In-Depth Stock Guidance and Research
By Brian Stoffel - Apr 11, 2017 at 9:02AM

The stock is undeniably expensive. Here's why that shouldn't stop you.

The story behind Veeva Systems (VEEV 0.50%) is pretty simple. Peter Gassner, founder of the company, used to be an executive at Salesforce.com (CRM -2.48%). While he was convincing companies to try out Salesforce's cloud solutions, he realized that the pharmaceutical industry had some very unique needs that Salesforce's build-it-yourself infrastructure couldn't meet.

So, in 2007, he decided to strike out on his own, leaving Salesforce to found Veeva. His first product for the market was Veeva CRM (customer relationship management), which helped drug companies track what their sales force was doing and who was buying their drugs. The company then expanded out to Veeva Vault -- focused on recording, storing, sharing, and abiding by regulatory laws. The strategy has worked, and the stock has responded in kind. 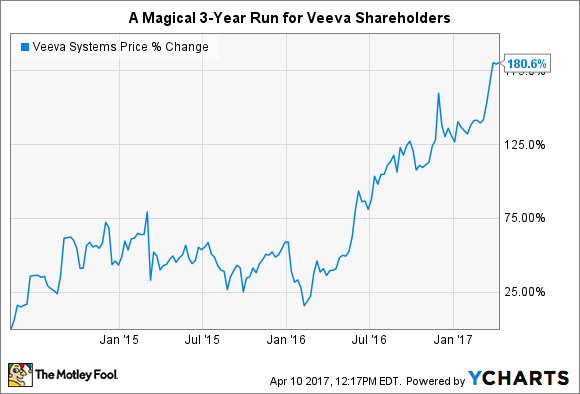 If you want a piece of the company now, it might seem like you've missed the boat. Does that mean you should avoid buying shares while they're at all-time highs? Or should you bite the bullet and pay up for quality? Here's how to think about it.

There's no denying this is expensive

Without a doubt, Veeva is expensive. By almost every traditional metric, shares are pricey. Consider the following, and compare it to Veeva's much larger peer, Salesforce.

While the two look comparable in terms of what they'll earn in 2017, Veeva trades at a 50% premium in terms of free cash flow, and a 35% premium relative to its growth rates. And this completely ignores how Veeva is valued relative to the typical S&P 500 stock: While the average stock in the S&P 500 trades for about 26 times trailing earnings, Veeva's P/E ratio is over 100. 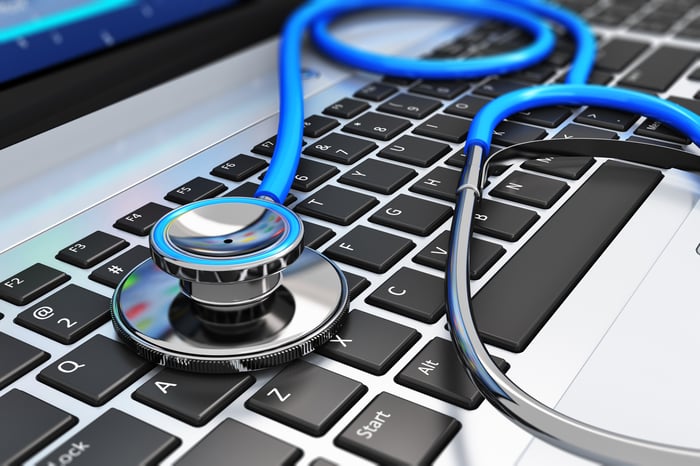 The bottom line is this: Veeva stock is expensive. Any troubles the company might experience with competition, weaker-than-expected outlooks, or even increased investments for the future could cause the stock to drop somewhat dramatically... at least over the short run.

That's why I don't think it's wise to "back up the truck" at this point.

But there's so much going in the company's favor

At the same time, Veeva has so much going for it. Chief among everything else is the company's moat. When a drug company signs on to Veeva CRM, it would be loath to switch to another CRM provider. Doing so would not only be expensive, but it would be cumbersome and likely lead to lots of headaches. We call that kind of a moat "high switching costs."

And if switching costs with a CRM platform seem high, imagine how much higher it would be if a company like Veeva was storing all of your mission-critical data from clinical trials! That's why, once a company signs on with Veeva and starts using multiple products, they will likely only switch away if (1) the service becomes awful or (2) it becomes prohibitively expensive.

Therefore, its important to see what kind of business momentum Veeva has going for it. Since 2012, revenue has grown at a compounded rate of 43% per year! That alone speaks to the company's success.

But if you still aren't convinced, it's worth taking a look at how many drug companies are signing up to use Veeva's services.

And keep in mind, this is just a single year's growth. CRM used to be the company's bread and butter, and Vault has only been available at scale for a little over three years now.

And all of this ignores the huge announcement Veeva made last year: It is looking to offer its cloud solution outside of the pharmaceutical market. Specifically, the company will be offering a solution called Vault QualityOne. The service will be focused initially on industries that tend to be heavily regulated, like chemicals, manufacturing, or consumer packaged goods.

As a recent interview with The Motley Fool by Veeva president Matt Wallach highlights, this move has the potential to drastically expand Veeva's total addressable market.

So, how should you approach the situation? I suggest that if you're truly interested in this high-growth, high-moat business, you should open a "starter" position and set aside cash for buying at better and better value points in the future. Such value points might not necessarily mean "lower share price," but instead a lower P/FCF ratio, or some other measure.

By doing so, you have skin in the game to keep you exposed to the upside, while still having some dry powder to use should the stock fall. That's my approach now. Veeva makes up 3.5% of my real-life holdings, but I would have no problem increasing that significantly if the market gave me the opportunity.