Please ensure Javascript is enabled for purposes of website accessibility
Log In Help Join The Motley Fool
Free Article Join Over 1 Million Premium Members And Get More In-Depth Stock Guidance and Research
By Daniel B. Kline - Updated Apr 13, 2017 at 3:31PM

The chain has introduced a modern variant on something it has long done in its stores.

Wal-Mart's (WMT 0.11%) Sam's Club has generally followed the same path as its closest competitor, Costco (NASDAQ: COST), when it comes to e-commerce. Both chains have websites, but neither has focused on using its site to drive sales until fairly recently.

That has been reflected in the slow e-commerce growth Sam's Club has delivered compared to many pure-digital and even traditional retailers. The warehouse club saw its e-commerce sales contribute roughly 0.8% to comparable-store sales in its fiscal Q4 2017, the same growth it showed in the same quarter last year.

Those small increases are reflective of the fact that Sam's Club, like Costco, has always sought to drive members to its stores to shop. The chain has done that by offering a low-cost food court, an ever-changing array of merchandise, product sampling, and of course, low prices. In recent quarters, though, especially over the holiday season, Sam's has followed Wal-Mart's lead and used its website to drive in-store traffic through offering a "buy online, pickup in-store" option while also making sure that doing that, and using the store for returns of online purchases, worked smoothly.

Now, with the holiday season in the rearview mirror, Sam's Club has been trying a tactic that has worked for both pure-digital and brick-and-mortar retailers to push sales higher. The company has been offering a free collection of sample-size products on its website to any customer who placed an order in April. 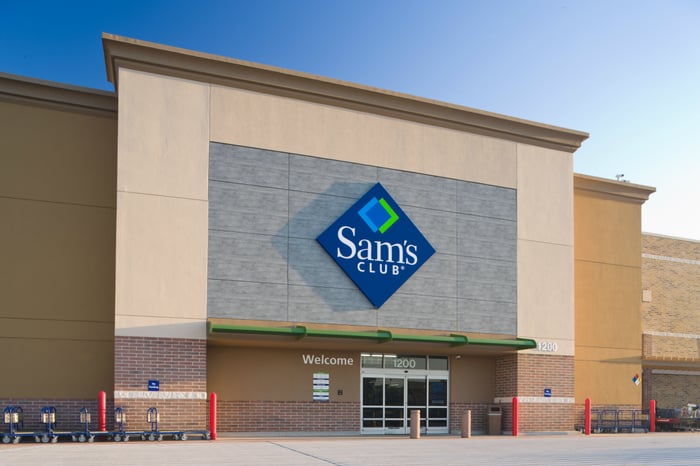 What was Sam's Club doing?

The warehouse club is using a model that online retailers like Birchbox have had success with. That pure-digital company sells $10 monthly subscriptions for which customers get sent five sample-size beauty products each month. The goal is to get people to use the items, like them, and purchase full-size products. That's a concept that physical retailers have used in-store, where small samples are often placed in your bag, and online, where digital customers actually get to pick which products they want to try.

The Sam's Club offer, which was sold out as of April 10, used the same marketing tactic. Any member of the warehouse club who placed an order on its website received a "Tastes & Sips Sampler" full of snacks and drinks, along with an Easter-themed tote bag.

It's not a revolutionary idea, but it's a simple way for Sam's Club to put products into its consumers' hands in order to get them to try them. In many ways it's a digital variant of what the warehouse clubs do in their stores, handing out free samples of everything from entrees to snacks and beverages in an effort to get customers to try, like, and buy the sampled product.

This is a smart idea

By offering the free sample bags (which were also available for purchase for $14.53) Sam's Club has taken a concept familiar to its members and brought it into a digital age. Some consumers, much like they do in the stores, will simply be happy to get something for nothing and won't ever purchase any of the sampled items. Others, however, may find a new favorite. That could lead them back into a Sam's store or to samsclub.com to get more.

This is not a revolutionary idea. Instead, it's a smart use of a website that will have multiple benefits for the chain. If the store continues this each month, it should drive digital traffic as consumers rush to buy something to get each month's offering before it has all been claimed. And giving away free stuff should please the recipients.

Lastly, the samples themselves should drive sales for at least some of the products in the bags. That could produce an in-store or online sales volume increase, and it can also help the company make decisions about which of the included products to continue to stock as well as which ones would benefit from in-store sampling.