Royal Gold stock is surging, and there are three solid reasons why it can continue to rise higher.

Gold prices have been very volatile lately, but at around $1,250 per ounce, the yellow metal is trading near the same level it was exactly a year ago. That, however, hasn't deterred Royal Gold, Inc. (RGLD 0.76%) bulls who have pushed shares of the precious metals streaming company up almost 37% in one year as of this writing. This stunning rally is making investors skeptical, especially given that Royal Gold is already way ahead of rival precious metal streaming companies Franco-Nevada Corp (FNV -3.33%) and Silver Wheaton Corp (WPM -0.68%).

It's fair to be cautious, but long-term investors have three solid reasons to not worry about Royal Gold.

You'd be right to feel jittery if Royal Gold's operational performance wasn't up to mark. Fortunately for investors, the company is growing at a strong pace.

Royal Gold generated record operating cash flow last quarter backed by 9% growth on its top line. Its profits jumped to $58 million for the six months ended Dec. 31, 2016 versus a loss of $30 million in the year-ago period. While a huge tax expense dented its year-ago profits, Royal Gold's operating income still came in almost 55% higher during the six-month period. Going by these numbers, fiscal year 2017 (ending June 30) could be a record year in terms of revenue and operating cash flows. From that standpoint, the market isn't wrong to be bidding the stock up.

Royal Gold is currently reaping the fruits of investments made during the weak business cycle of 2014-2015 when gold prices were languishing. Not one to miss the opportunity, Royal Gold struck several agreements, paying cash-strapped miners upfront and securing valuable metal streams in return. Royal Gold is a streaming and royalty company that buys gold and silver from miners in exchange for upfront financing. To give you an example, Royal Gold paid $610 million to Barrick Gold (GOLD 0.16%) in 2015 and can purchase a percentage of the gold and silver produced from Barrick's 60% interest in Pueblo Viejo -- also one of the world's largest gold mines -- for life.

Naturally, Royal Gold stands to gain when miners expand production. The best part is that it doesn't have to bear any costs and risks associated with mining and can also buy precious metals at discounted prices per its streaming agreements. What matters for investors is that Royal Gold has already invested in the future: It has interests in 22 developing mines across the globe, including North America, Australia, Chile, and Argentina. That, combined with the expansion potential of its existing mines, should secure revenues for the company for years to come.

Royal Gold grew its revenue and operating cash flow at annual compounded rates of 29% and 25%, respectively, during the decade through June 30, 2016. Those are incredible numbers, and shareholders have been rewarded richly along the way -- Royal Gold has not only paid but increased its dividend every year since 2000. Royal Gold's dividend has grown at a stupendous compounded annual clip of 20% since.

Forget about growth, even stable dividends are rare in a commoditized industry, which is why Royal Gold stands out. None of its streaming peers or even mining giants like Barrick boasts a dividend record even close. Just check the blue line in the dividend per share chart below to see what I mean: 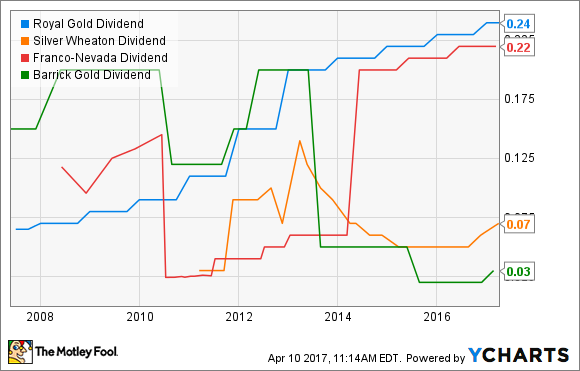 Maintaining a "growing and sustainable dividend" is among management's key priorities, which means investors in Royal Gold can bank on dividends while putting up with any volatility in the stock price.

Another area where Royal Gold's strong cash flows have worked in shareholders' favor is that management has been able to avoid frequent stock issues to raise funds -- an approach common in the streaming business. Not having to watch your capital getting diluted while enjoying stable dividends is something every investor seeks.

The biggest concern for investors right now is whether Royal Gold stock is overvalued after its recent run up. The answer is, "No" when it's compared with Silver Wheaton and Franco-Nevada. 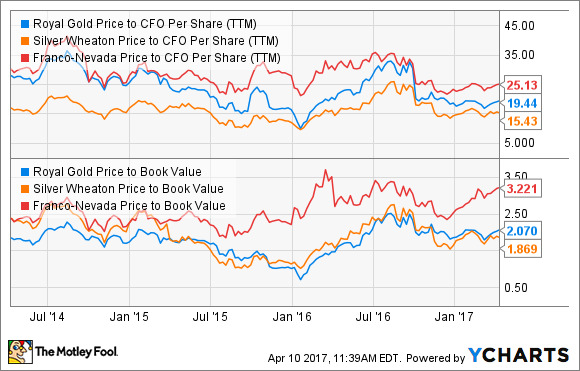 Maybe not really a steal, but Royal Gold isn't pricey either. Most importantly, the stock is still trading below its five-year average price-to-sales and price-to-cash-flow despite its revenues and cash flows hitting record highs. In other words, there appears to be greater upside potential in Royal Gold than downside, and the stock looks poised to be a winner in the long run even at current prices.