The company's Wireless DataCom business is CalAmp's key moneymaker -- and it's a big bet on Internet of Things connectivity.

CalAmp (CAMP 5.26%) calls itself a pure-play in the connected vehicle market and the broader Industrial Internet of Things (IIoT) space. That's an accurate description, but it's not a helpful one for investors trying to figure out what exactly the company does, and how it makes money.

So, let's break down CalAmp's business to what the company actually sells to its customers, and see how that segment is growing. How CalAmp makes most of its money

One of CalAmp's key revenue drivers is sales of its hardware for tracking industrial equipment, which allows CalAmp customers to track the time, date, motion, location, geo-zone, and other details of industrial equipment. The company also sells telematics hardware that collects information about how a vehicle is functioning, as well as cellular routers for location-based tracking of vehicles for emergency responders and other uses.

CalAmp also sells software and services that allow companies to manage and analyze what's happening to their equipment and vehicles. That includes software like fleet tracking and asset management for local governments, supply chain integrity, as well as stolen vehicle recovery services, and it even sells its own telematics cloud services.

This combination of hardware, software, and services are often referred to by the company as mobile resource management (MRM) and machine-to-machine (M2M) solutions that make up the company's Wireless DataCom segment. This segment is CalAmp's biggest money maker, and it brought in 86% of CalAmp's total revenue in 2016.

Here's a look at the company's division of revenue between its Wireless DatCom segment and its Satellite business over the past three years: 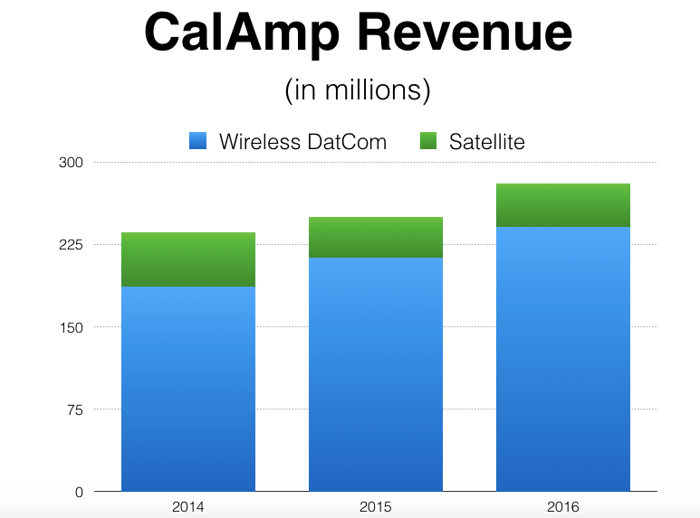 It's worth pointing out here that CalAmp actually shut down its Satellite business in the fiscal second quarter of 2017, so going forward, the company is exclusively making money from Wireless DataCom.

You can see from the chart above that revenues from Wireless DataCom have steadily increased over the past few years, and in 2016, they ticked up by 13% year over year, to $241.4 million. That growth was spurred on mainly from sales of MRM products for fleet management and non-vehicle asset tracking, according to the company.

More of the same going forward

Investors looking for a glimpse into CalAmp's future should consider what the company is doing to grow its software and services sales. CalAmp amassed an impressive 4,000 net software subscribers in its fiscal third-quarter 2017, and this group will become increasingly important for the company in the coming years.

Research firm IDC said in a report earlier this year:

[W]hile hardware spending will nearly double over the five-year timeframe, it represents the slowest growing IoT technology group. Software and services spending will both grow faster than hardware and connectivity.

The Industrial Internet of Things is part of the broader Internet of Things (IoT), which means CalAmp's IIOT software and services will increasingly be the key to the company's growth. The IIoT is expected to reach $195.4 billion by 2022, and CalAmp's early lead in the space -- as well as its ability to diversify between hardware, software, and services -- makes it a potential winner.