Investors might be tempted to run from Netflix when they hear about negative cash flow problems. Thing is, it isn't all that bad -- yet.

The process of starting a new business is largely capital intensive. You have to spend a lot of money to purchase what you need to run your company. Generally accepted accounting principles (GAAP) -- the standards for reporting financial results -- recognize this. When cash is spent on initial purchases of equipment, as an example, its effects on financial statements are allocated over its useful life, usually the period in which it produces revenue, in a process called depreciation.

Streaming giant Netflix (NFLX 1.56%) has been in business for nearly two decades and isn't just starting out, so what does all this talk of depreciation have to do with the company? Well, the concept of depreciation can help investors understand the company's poor cash flow position. Depreciation provides a convenient model for understanding a worrisome area of the company's current operations: the acquisition of original content.

It isn't as bad as it sounds

Though it may not seem so, Netflix is actually starting a new business. Over the last several years, it has been leaving its domestic market and taking its service overseas. Netflix is spending all of the cash it generates -- and much more that it's borrowing -- to build a new global streaming library, similar to when it launched its domestic streaming business. This is where the depreciation model is useful. Netflix is purchasing content that requires significant upfront investment and will generate revenue for years to come. The company will also be expensing this content over the period in which it produces that revenue.

Another point that is often overlooked is that after the initial period of greater spending, the cost to maintain the library will be significantly lower. Netflix will continue to add new shows, but at a much lower rate. It also turns out that consumers like content produced in other countries. In an interview at the 2017 Mobile World Congress, Reed Hastings revealed that Brazilian production 3% was extremely popular in the United States and Germany as well as its native Brazil. This means Netflix can leverage its self-produced content all around the world.

This process has been greatly simplified to make a point, and Netflix will be adding to its content library for some time, but it also has a greater pool of potential subscribers to draw from. Netflix knows this model works because it succeeded first domestically, then expanded its service to Canada, and it took roughly three years for the service to become profitable there. Benjamin Swinburne of Morgan Stanley confirmed this timetable last year when he indicated that Netflix was profitable and had achieved double-digit penetration in all of the markets where it had been for at least three years. 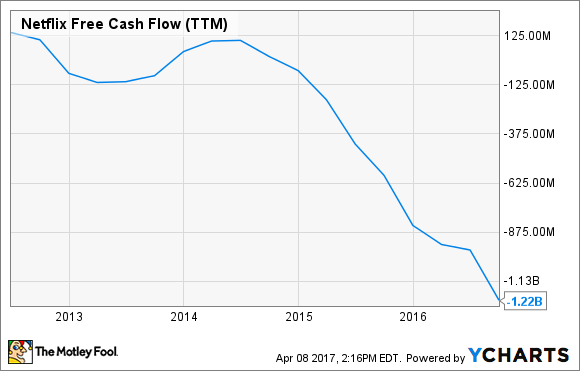 Over the long run, we believe self-producing is less expensive...than licensing a series or film, as we work directly with the creative community and eliminate additional overhead and fees. In addition, we own the underlying intellectual property, providing us with global rights and more business and creative control. Combined with the success of our portfolio of originals and the positive impact on our member and revenue growth, we believe this is a wise investment that creates long term value.

This is an area Netflix shareholders need to watch. The company will eventually need to produce meaningful cash flow. Netflix is walking a tightrope between increasing subscribers and growing its content library and has done this successfully for some time. If subscriber growth should falter, it may become difficult to raise additional funds and the virtuous cycle could begin to unravel. However, investors should remember that Netflix is building an international library and that takes time and money. Yes, that means there will be negative cash flow for a time. That doesn't mean the company is doomed.