The construction industry has been on the upswing lately, and architectural glassmaker Apogee Enterprises (APOG 0.76%) has been a beneficiary of improving conditions in the space. Coming into Thursday's fiscal fourth-quarter financial report, Apogee investors weren't looking for huge bottom-line gains, but they still wanted to see evidence that growth would continue well into the future. Apogee's backward-looking numbers were impressive, yet what spooked some of those following the stock was its outlook for the coming fiscal year. Let's take a closer look at Apogee Enterprises to see how it did and what's ahead for the glass company. 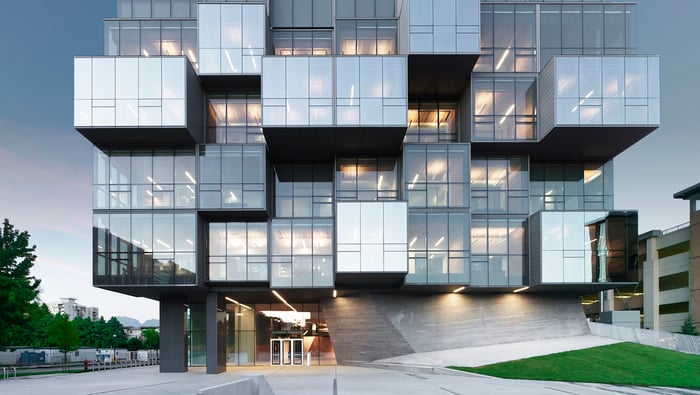 One concern that arose during the quarter was relative weakness in Apogee's cost control efforts. Despite a big top-line gain, operating income climbed by only 3%, as a big jump in overhead expenses ate into the company's revenue growth. It took a sizable decrease in income tax expenses to produce the bottom-line rise that Apogee enjoyed.

From a segment perspective, Apogee had mixed performance. The biggest winner was the architectural framing systems market, which saw segment sales climb by more than half and produced a 26% gain in segment profit. The acquisition of Sotawall played a major role in those gains, but even on an organic basis, the segment posted better than 30% revenue gains during the quarter. Meanwhile, the key architectural glass segment had solid performance, posting 14% gains in both sales and operating income. The large-scale optical market also grew sharply, seeing sales climb by more than a fifth and operating income improve by more than 40%. Only the architectural services segment sagged, with double-digit percentage declines in revenue and profit.

CEO Joseph Puishys celebrated the results. "We once again drove revenue growth in all four segments," Puishys said, "by leveraging new geographies, products, and markets for better than market growth." He also pointed to margin improvement in key parts of Apogee's business, and believes that ongoing efforts to rein in costs will prove to be more successful than they were during the fourth quarter.

Apogee also believes that its current financial condition is strong. With ample cash from operations during the past fiscal year, it has been able to make acquisitions without obtaining unnecessarily large amounts of outside financing. At the same time, it's used stock repurchases and dividends to return capital to shareholders.

Yet despite Apogee's enthusiasm, some investors were disappointed with the company's fiscal year 2018 outlook. Apogee said that it expects to see revenue climb by 10% from fiscal 2017 levels, and that should work out to between $3.35 and $3.55 per share in earnings. Those assumptions are based on expectations for industry conditions that include mid-single-digit percentage growth in the U.S. commercial construction market. Even though Puishys believes that "our internal market visibility from backlog, commitments and bidding activity, and external metrics [are] moving in the right direction," investors had hoped that Apogee's guidance would be somewhat stronger in reflecting growth for the company.

Perhaps because of that weak guidance, Apogee investors didn't react well to the report, and the stock dropped 13% on Thursday following the morning report. In order to reassure long-term investors that its growth story is intact, Apogee will have to follow up with better performance throughout the coming fiscal year. But if something happens to pull down the construction industry, then Apogee could find itself at risk of a more extensive pullback for its fundamental business prospects.