The market fell, but these stocks rose. Find out why.

The stock market had another tough day on Thursday, with major benchmarks again falling between 0.5% and 0.75% on the day. A slate of big banks released their earnings this morning, and although the results were mixed, the sector gave up ground and pulled market sentiment down with it. Geopolitical concerns continue to swirl, and the future of the U.S. domestic agenda remains in doubt as the Trump administration regroups.

Yet some companies reported good news today, and Gold Fields International (GFI 4.10%), SkyWest (SKYW 5.74%), and Applied Optoelectronics (AAOI -2.17%) were among the best performers on the day. Below, we'll look more closely at these stocks to tell you why they did so well.

Shares of Gold Fields International rose 7% on another strong day for precious metals. Gold futures contracts were up more than $10 per ounce, approaching the key $1,300 level, and silver climbed above $18.50 per ounce. Gold has responded favorably to rising geopolitical tensions, and the fact that long-term bond rates have moved lower despite the Federal Reserve's latest short-term rate hike suggests that precious metals might not suffer as much from financing-related outflows as some investors had previously thought. As a key player among South African mining companies, Gold Fields is in a strong position to benefit if a rebound in precious metals picks up steam in the months to come. 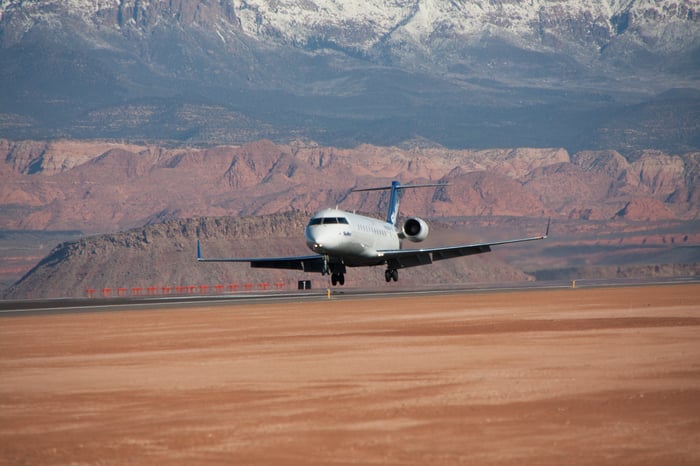 SkyWest stock gained 8% after getting positive comments from stock analysts. Raymond James upgraded the regional carrier from outperform to strong buy, arguing that the airline has plenty of room to keep boosting its profits despite recent share-price weakness. With consolidation among the major airline companies, regional players like SkyWest have filled a key niche in ensuring service to small markets continues. SkyWest has regional arrangements with Delta, United, American, and Alaska Airlines, and that gives it flexibility to deal with changing industry dynamics over time. Raymond James still believes that the stock could climb 25% or more from here, even though SkyWest has more than doubled in little more than a year.

Finally, shares of Applied Optoelectronics climbed 11%. The fiber-optic network specialist preannounced its first-quarter financial results, surprising investors with better performance than both they and the company had expected. In particular, Applied Optoelectronics expects first-quarter sales of $96.2 million, which is well above the $87 million to $91 million in revenue that the company had set as its previous guidance. Similarly, earnings of between $1.00 and $1.02 per share were far better than the range of $0.80 to $0.88 per share that Applied Optoelectronics had expected before. Demand for data-center related products has helped spur growth for the company, and investors are hopeful that the trend will continue throughout the remainder of the year, lifting the stock further.