It could, but with a potential caveat.

A while back, KGI Securities analyst Ming-Chi Kuo put out a research note in which he offered some insight into the display technology that Apple (AAPL) will use in its upcoming premium iPhone 8. As expected, Kuo says that it'll pack an organic light-emitting diode (OLED) display.

What's interesting about this OLED display is that the resolution of the 5.8-inch display is expected to be 2800-by-1242. Using an online pixels per inch calculator, this works out to about 528 pixels per inch. 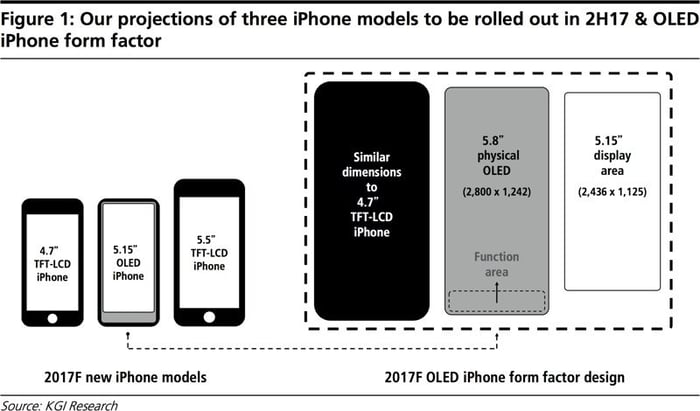 If Kuo's info is good, then the OLED iPhone might offer a substantially sharper display than any iPhone that has come before. There may, however, be a catch.

In Apple's current liquid crystal displays (LCDs), each pixel is made up of three subpixels -- green, blue, and red (this is known as "RGB stripe").

In Samsung's (NASDAQOTH: SSNLF) current OLED displays (remember: Samsung is expected to be the sole manufacturer of Apple's premium OLED displays this year), the subpixel structure is different. Instead of equally sized red, green, and blue subpixels (as this image from AnandTech shows), the subpixels are in what are referred to as "diamond pixels."

What all this ultimately means is this: The densities of the red and blue subpixels are lower than the density of the green subpixels. Indeed, DisplayMate ran the numbers for the Galaxy S8's display and came up with 403 subpixels for red and blue and 570 subpixels per inch for the green (corresponding to the total number of pixels on the display).

If Apple uses an OLED display and a PenTile subpixel arrangement, then the OLED iPhone would be the sharpest display ever from a total pixel perspective, but in terms of red and blue subpixel density, it'd actually be worse off than the display on the current iPhone 7 Plus.

Will Apple use a PenTile arrangement?

At this point, it's not clear how much the display technology used in the iPhone 8 will differ from that of the Galaxy S8. Based on the rumors/leaks, Apple seems to be very interested in making the OLED iPhone 8 unequivocally "better" than the LCD-based iPhone 7s/7s Plus, so we might see it go with an RGB Stripe subpixel configuration if it can achieve the desired yields, brightness, and image quality.

On the other hand, Apple might be willing to make a sacrifice with respect to the red/blue subpixel density in exchange for the advantages that OLEDs bring to the table.

Hopefully, we'll know more in about six months when the in-depth reviews of the device are published.