The leading theme-park operator offers up more details on the new expansion for Disneyland and Disney's Hollywood Studios that will open in 2019.

We're two years away from the most ambitious update to Disney's (DIS 3.30%) domestic theme parks. Star Wars Land will open on both coasts in two years, and over the weekend we learned a little bit more about the 14-acre expansion taking place at Disneyland and Disney's Hollywood Studios.

We learned where within the Star Wars universe guests will be exploring, come 2019. Star Wars Land will be situated in a remote village on the Outer Rim, on the edge of the Unknown Regions. It's not a place that will be familiar even to diehard Star Wars fans. This is a new territory by design. It will be an outpost where smugglers, rogue traders, and adventurers set up camp before moving on to their next ventures.

Going with an entirely new village concept may seem like an odd design choice at first. Guests won't be strolling through Darth Vader's Death Star or engaging in a shootout at Tatooine's Mos Eisley cantina. However, park visitors will still recognize many of the droids rolling around. Other familiar sights will include life-sized AT-AT walkers and a food vendor using a pod racer to grill up his meats. Disney is taking some big risks with the Avatar-themed expansion opening next month at Disney's Animal Kingdom, given how badly that property has faded from mainstream awareness, but that won't be the case in two years with Star Wars Land. 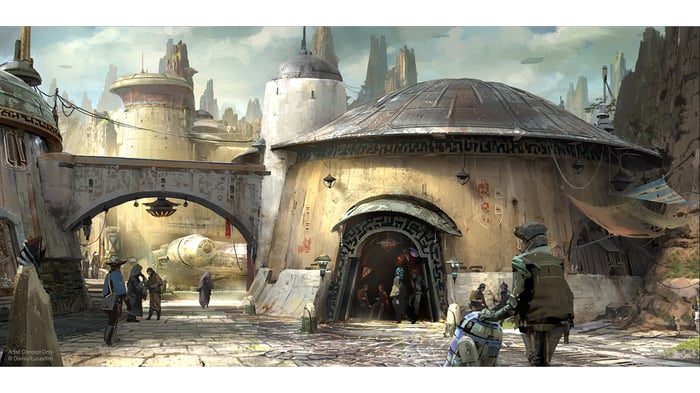 We also learned a bit more about the two new attractions that will open in Star Wars Land in two years. We've known since the expansion was announced in 2015 that one of the rides would allow guests to pilot the Millennium Falcon. The attraction makes sense. Guests may be exploring a village that is foreign to fans of the franchise, but as anyone that saw 2015's Star Wars: The Force Awakens knows, the iconic Millennium Falcon has wound up in some previously unsuspected places.

An interesting wrinkle revealed over the weekend during the Star Wars Celebration in Orlando is that the Millennium Falcon attraction will be interactive. Riders will be grouped together as crews in piloting the light freighter, and how much damage the Millennium Falcon receives during the journey will dictate the way that the ride ends. In short, there will be a gaming element to the attraction that should help encourage re-rides among millennials and gamers.

Some details were also unveiled about the second centerpiece attraction. Patrons will be thrust into the heat of a battle between the Resistance and the First Order. Park guests will be standing in the middle of the action as the exchanges heat up, but this doesn't seem as if it will be a mere stage show.

Disney can use the boost, especially if Pandora -- The World of Avatar fails to jump-start guest counts this summer. Attendance has fallen at both Disneyland and Disney World in three of the past four quarters, and Disney World's two biggest rivals have already announced major attractions on the way for 2018. Disney can't get Star Wars wrong -- and it probably won't.