Please ensure Javascript is enabled for purposes of website accessibility
Log In Help Join The Motley Fool
Free Article Join Over 1 Million Premium Members And Get More In-Depth Stock Guidance and Research
By Lee Samaha - Apr 17, 2017 at 10:30AM

The top stocks to buy in the sector include ABB Ltd., Parker-Hannifin Corp., and Ingersoll-Rand plc.

Stock prices in the electrical equipment sector have been buoyed by a combination of expectations for an infrastructural stimulus, stabilization in oil and gas capital spending, and a general pickup in U.S. industrial production. While all three drivers are well founded, the market has seemingly baked them into companies' valuations and it's harder to find value in the sector. Still, I think there's a good case for buying stock in Parker-Hannifin Corp. (PH 1.90%), ABB Ltd. (ABB 0.79%), and Ingersoll-Rand plc (TT 3.10%) .

The case for Ingersoll-Rand is based on the fundamental and ongoing margin improvements at its core Trane unit, which includes heating, ventilation, and air conditioning (HVAC). Meanwhile, free cash flow generation is strong, and if U.S. industrial production starts to grow again in 2017, Ingersoll-Rand can expect better end market conditions in its industrial segment. Throw in a relatively cheap valuation, and the stock is attractive for investors looking for a good GARP -- growth at a reasonable price -- stock.

Moreover, the outlook for the HVAC industry is upbeat in 2017. Ingersoll-Rand predicts organic revenue growth in the mid-single digits for residential and commercial HVAC this year. Meanwhile, peer United Technologies predicts residential and commercial HVAC organic sales to be up mid-single digits and low-single digits, respectively, in 2017. In a nutshell, Ingersoll-Rand's core business is operating in favorable end markets at a time when it's expanding margin -- a potent combination. 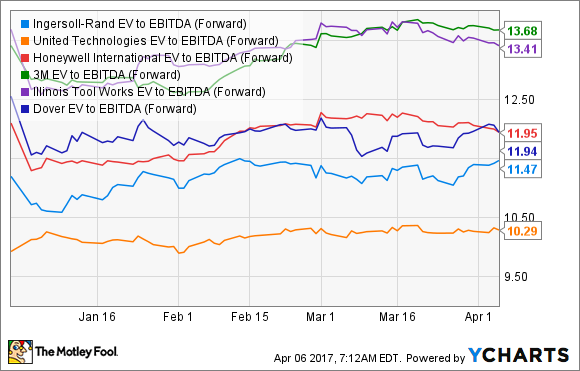 In a similar vein to Ingersoll-Rand, Parker-Hannifin has plans to significantly expand margins, and given that its order growth has been positive in the past two quarters -- after five quarters of decline -- investors have every reason to expect growth going forward.

Moreover, the acquisition of CLARCOR Inc complements the company's filtration operations and adds a strong recurring revenue base to Parker-Hannifin's earnings.In addition, the company's broad-based exposure to industrial production makes it a key beneficiary of the expected recovery in U.S. industrial conditions this year. Indeed, on the recent second-quarter earnings call, management raised its organic growth forecast for the second half from 2.3% to 3.3%.

All told, Parker-Hannifin's end markets are set to improve in 2017, and coupled with an underlying margin expansion story, it's an attractive stock for investors.

Switzerland's ABB Ltd. is not the sexiest of headline growth stories -- comparable orders declined 5% in 2016 and revenue fell 1%, with operational EPS up a meager 4% --  but it's one of the cheapest stocks in the sector based on enterprise value (market cap plus net debt) to free cash flow. 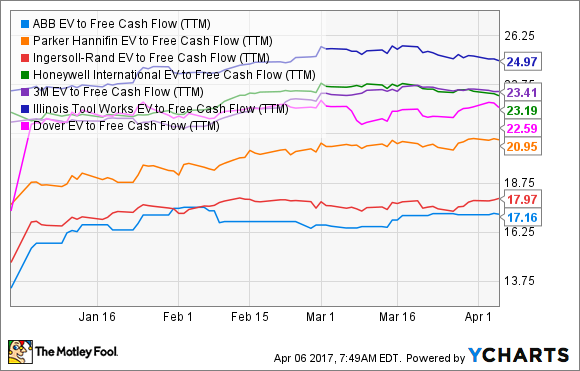 No one wants a buy a cash-cow business that's about to fall into decline. But here's the thing: ABB is taking action to improve operationally, and its end markets should start to look better in 2017.

Pressure from activist hedge fund Cevian Capital has helped ABB's management undertake a strategic review of its power grids division. Cevian wanted power grids to be spun off, and the result was a plan to fully realize the value in power grids and the rest of ABB. Key parts of the plan include:

These actions come at an opportune time for ABB, because there's clear evidence of stabilization in some of its core end markets. For example, one of its key competitors in industrial automation, Emerson Electric, recently reported that its trailing-three-month orders in automation solutions had stopped declining.

In short, ABB is a value play for investors looking for a stock with turnaround potential, with end markets starting to look slightly more favorable. Throw in a 3.2% dividend yield, and the stock is worth looking at closely.

All told, each of these stocks offers exposure to improving industrial markets, but for their own specific reasons, they have an opportunity to make operational improvements, which should lead to margin expansion in the coming years.