Despite posting a steep decline in its first quarter earnings, Delta Air Lines is on track to return to profit growth for Q2 and beyond.

Over the past two years, Delta Air Lines (DAL -1.25%) has been thwarted repeatedly in its attempts to return to unit revenue growth. This has prevented the company from offsetting recent increases in its fuel and labor costs, causing some margin erosion.

Indeed, Delta reported a sharp decline in profitability in its Q1 earnings release last week. However, management remains confident that the carrier's revenue and earnings will recover soon. Here are five key points that Delta executives made on the company's recent earnings call to support their contention that results are about to improve.

Unit revenue is finally getting back on track

... [W]e feel confident that we have turned the corner on positive RASM, and we will continue to stay conservative with our capacity levels to help firm the unit revenue trends. ... Our unit revenues will be up in the 1% to 3% range for the June quarter, which is 0.5 point[s] lower than our expectations were last week before the storms in Atlanta.
-- Delta President Glen Hauenstein

Delta entered the first quarter expecting unit revenue to rise 0%-2%. However, the unit revenue environment improved at a slower-than-expected pace during the quarter. This caused passenger revenue per available seat mile (PRASM) to slip 0.5% in Q1. However, demand trends have improved recently. Looking out over the next few months, fares for advance bookings are up significantly year over year. Furthermore, while last-minute fares haven't recovered to the highs of early 2015 yet, they have been improving over the past year.

As a result, Delta has forecast that PRASM will increase 1%-3% year over year in the second quarter. Unit revenue growth would have been even stronger but for a series of strong storms that severely disrupted operations in Atlanta (Delta's largest hub) earlier this month.

Time to return to profit growth

For the back half of the year, while fuel prices are climbing, our CASM increases are moderating, and our RASM trajectory is improving. So we continue to expect our margins to expand compared to the prior year on a normalized basis.
-- Delta CFO Paul Jacobson

Delta projects that its modest unit revenue growth will be enough to get profit growing again in the second quarter. While non-fuel costs are expected to rise significantly, this will be offset by a year-over-year decline in fuel expense. (Delta incurred big hedging losses in the year-ago period.)

Looking further ahead, fuel will become a year-over-year headwind again in the second half of 2017. However, non-fuel cost growth will slow dramatically, and further unit revenue gains should enable Delta to continue expanding its profit margin.

Yes, we continue to see excess capacity in wide-bodies as we look to the future for the industry as a whole. We continue to look internally as to what that means to Delta... and you could anticipate some reductions, I think, broadly over the next several years.
-- Delta CEO Ed Bastian

Overcapacity in international markets represents the biggest threat to Delta's unit revenue and profitability going forward. The rapid growth of low-cost transatlantic carriers could prove particularly problematic, as it could spark a price war in what has traditionally been a very lucrative market. 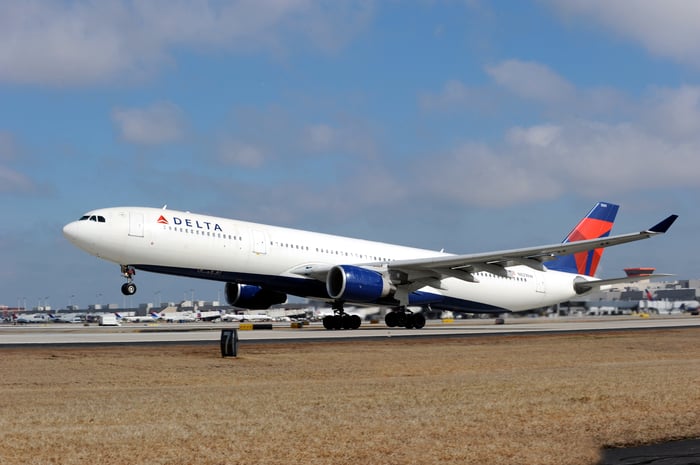 Delta may defer some of its orders for widebody planes. Image source: Delta Air Lines.

The Aeromexico joint venture is about to begin

Monday, we received DOT approval to implement our JV with Aeromexico. We are looking forward to even deeper cooperation and driving incremental value for customers and shareholders through this innovative partnership.
-- Glen Hauenstein

Delta's refinery is back to producing profits

The refinery posted a $44 million profit in the quarter ... lowering our all-in jet fuel price by $0.05 in the March quarter alone. And we continue to expect that the refinery will contribute $100 million for the year in lower fuel prices.
-- Paul Jacobson

While fuel prices will be a cost headwind for Delta Air Lines during most of 2017, the company is getting relief on one front: refinery profits. Delta is unique among U.S. airlines in that it bought an oil refinery five years ago as part of its fuel hedging strategy. This unusual move has produced mixed results.

Delta's refinery earned a strong profit of $290 million in 2015, but it swung to a $125 million loss last year due to tough industry conditions. However, it moved back into the black last quarter, posting a $44 million profit. For the full year, Delta expects the refinery to earn about $100 million, reducing the carrier's "all-in" fuel costs.