Please ensure Javascript is enabled for purposes of website accessibility
Log In Help Join The Motley Fool
Free Article Join Over 1 Million Premium Members And Get More In-Depth Stock Guidance and Research
By Reuben Gregg Brewer - Apr 18, 2017 at 9:09AM

When looking at Cameco and NexGen Energy, investors should take the bird in the hand...just in case things don't work out in the bush.

The uranium industry has been suffering through a deep downturn that doesn't look likely to abate in the near term. With uranium prices weak, the story behind Cameco Corporation (CCJ -3.67%) and NexGen Energy Ltd (NASDAQOTH: NXGEF) is all about the future. But that doesn't mean investors can forget about today. Here's why you're better off with Cameco right now.

The promise of tomorrow

If you take a moment to look at NexGen Energy's investor presentation, the beginning is all about electricity demand growing, the role of nuclear power in that, and the industrywide expectation that uranium demand will soon outstrip supply if current production trends remain in place. That's a quick summary that doesn't get into all of the fine details, but it paints a compelling picture of the future. 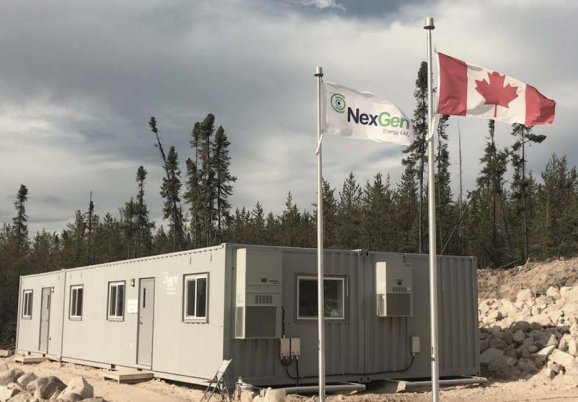 NexGen's role in this story is that it's exploring uranium assets that it will be able to bring online in the future, presumably when demand has begun to heat up. In fact, it's working on the first and third largest uranium deposits in Canada. If you buy into the long-term uranium story, NexGen is an interesting way to play it.

You just have to be aware that the story is all about the future because today, NexGen is losing money. In fact, it isn't even making any money because it doesn't have any operational mines. To fund the cash it's spending to develop its uranium assets, it's tapping the capital markets. For example, it issued roughly $71 million in convertible bonds last year. If you need more evidence of what's going on, the company's income statement doesn't even include a revenue line; the business is all about spending on mine development. 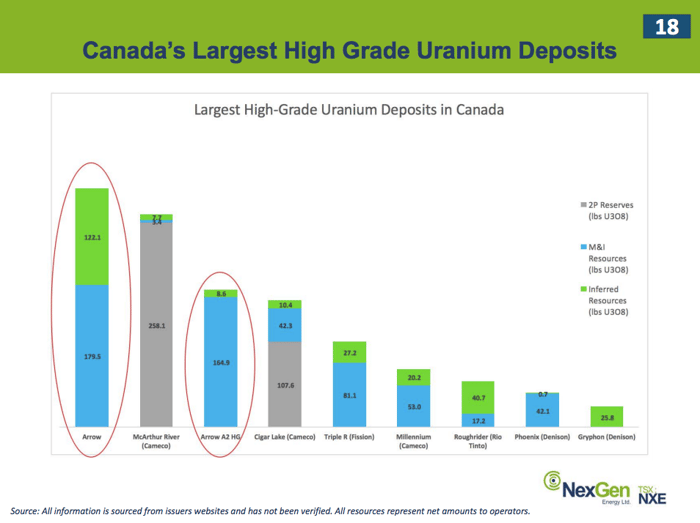 NexGen has some big mines in Canada, but look closely, and you'll see that Cameco does, too. Image source: NexGen Energy Ltd.

This is where Cameco comes in. Cameco is the world's largest publicly traded uranium miner, producing 27 million pounds of the nuclear fuel in 2016 while selling 31.5 million pounds worth. The thing is, it hasn't been easy to be a uranium miner lately, with CEO Tim Gitzel summing up the pain this way: "despite the uranium spot price hitting a 12-year low, the performance of our core business -- uranium -- was solid, and in line with our outlook."

There are two takeaways from that statement. First, 2016 was a bad year, with earnings dipping into the red because of one-time charges related to production curtailments (Cameco made $143 million if you pull the charges out). However, that was the first year of this long and painful downturn in which the miner posted a loss, which is pretty impressive. Second, despite the $62 million loss, the company's mining operations are running relatively smoothly. To sum it up, I'd say Cameco is making the best of a bad situation. In fact, despite the loss, the board approved the company's typical $0.10 per share quarterly dividend just as it reported fourth-quarter results. 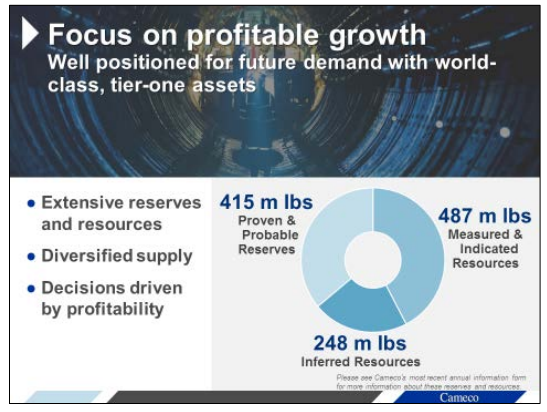 Cameco has plenty of uranium left in the ground. Image source: Cameco Corp.

And Cameco has assets that it can bring online (or ramp up) in the future, should demand pick up as expected. So, while this giant uranium miner is pulling in its horns today, it's ready to take advantage of the same industry uptick that NexGen is betting its future on. The difference is that Cameco has assets producing uranium today that are not only bringing cash in the door right now but will benefit immediately from rising prices.

There's nothing inherently wrong with NexGen Energy, but the company's story is all about the uncertain future. And sometimes, mines just don't work out as planned. Cameco's tale, meanwhile, is about an industry giant that's capably working through tough times today so it can get to the same future NexGen and its shareholders are banking on. I'd rather own a miner with operating assets and the ability to take advantage of the future. Add in the roughly 2.7% yield, and Cameco is easily my call, here.