Please ensure Javascript is enabled for purposes of website accessibility
Log In Help Join The Motley Fool
Free Article Join Over 1 Million Premium Members And Get More In-Depth Stock Guidance and Research
By Keith Speights - Apr 18, 2017 at 8:22AM

Exelixis stock has soared to all-time highs. But will the biotech's share price soon reach a plateau?

Exelixis (EXEL -0.10%) is, without question, one of the hottest biotech stocks around. Shares have nearly quintupled in value over the last 12 months. So far in 2017, Exelixis stock is up more than 40%.

But this tremendous success now raises questions about how much farther Exelixis' share price can increase from this point. Is it time for investors to move on? 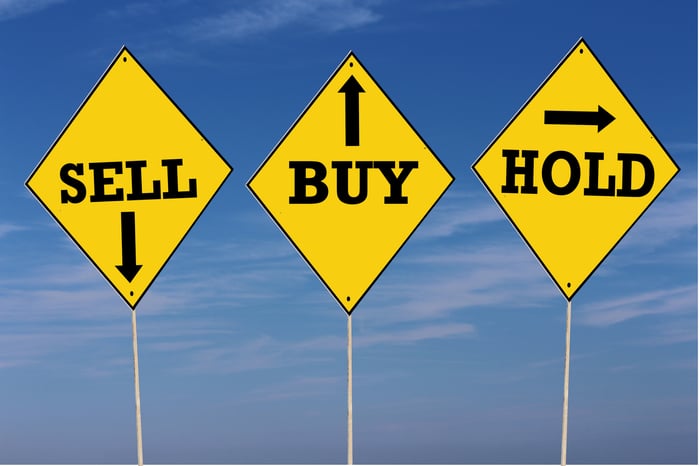 The case for selling

Thanks to its incredible run, Exelixis now claims a market cap of over $6 billion. Does the potential for its drugs indicate that the biotech's valuation could go a lot higher? Probably not.

Cabometyx has already proven to be successful as a second-line and third-line treatment for kidney cancer. The bigger market for Cabometyx is as a first-line treatment for kidney cancer. If approved for the first-line indication, the drug could reach annual sales of more than $1 billion, including revenue from Exelixis' other cabozantinib drug, Cometriq, in treating medullary thyroid carcinoma.

Cotellic won FDA approval in 2015 in combination with Roche's (RHHBY -2.32%) Zelboraf in treating melanoma. Roche is a partner with Exelixis on marketing Cotellic.

The drug could eventually reach $200 million in annual sales for the melanoma indication and possibly another $300 million in annual sales if approved for colorectal cancer and triple-negative breast cancer. However, the early results for Cotellic have been so disappointing that Exelixis filed for arbitration against Roche last year, questioning the big company's commercialization efforts for the drug.

Even if we assume that Cabometyx, Cometriq, and Cotellic hit the projected sales marks, the total annual revenue for Exelixis would be around $1.5 billion. The biotech's stock already trades at more than four times that amount. With the uncertainty surrounding Cotellic, there's a good argument to be made that Exelixis' valuation is near its peak based on the potential for its products.

The case for buying or holding

There are several key reasons buying Exelixis stock (or holding on to shares already purchased) might make sense. One is that the sales projections for the biotech's cabozantinib franchise will not only be achieved but could be too low.

Multiple clinical studies are underway with Cabometyx in combination with other drugs, including Bristol-Myers Squibb's (BMY -0.09%) Opdivo and Yervoy, Amgen's Vectibix, and Roche's Herceptin. Success as part of a combo regimen could raise the ceiling for peak sales for Cabometyx.

Another reason to buy or hold Exelixis stock is the potential for lesser-known partnered pipeline candidates. Japanese drugmaker Daiichi Sankyo (DSNKY -0.41%) is evaluating esaxerenone in a late-stage study for treatment of hypertension and in a mid-stage study targeting diabetic nephropathy. Sanofi has clinical studies in progress for two other experimental drugs developed by Exelixis.

Last, but not least, is the possibility that Exelixis could be acquired, driving its share price significantly higher. There are quite a few bigger drugmakers that could conceivably be interested, including Roche and Bristol-Myers Squibb.

Exelixis hasn't slowed down yet. However, my view is that the significant returns from this point forward will be much harder to achieve.

The kidney cancer market that presents the greatest opportunity for Cabometyx is also attracting plenty of attention from potential competitors. Bristol-Myers Squibb, for example, won approval for Opdivo as a second-line treatment for the indication and has its eyes on the first-line market.

I wouldn't count too much on other partnered assets helping Exelixis in a major way. The prospects of Daiichi Sankyo winning regulatory approval for esaxerenone are probably pretty good, but the others are much more iffy.

And buying a stock primarily because of the possibility of a buyout isn't usually a good idea. Potential suitors could find the price tag for Exelixis too high already. Even a company, such as Bristol-Myers Squibb, that might be interested could decide a partnership is a more cost-effective path to take.

Is it time to move on from Exelixis to other stocks with greater room to run? I suspect the share price could still go higher -- maybe even 20% or so. However, don't expect the huge returns of the past. It might not be quite time to move away from Exelixis, but that day is probably coming in the not-too-distant future.