From 1998 through today, Inovio Pharmaceuticals' stock history has been largely a depressing one.

A quick analysis of Inovio Pharmaceuticals' (INO 1.84%) stock performance history shows plenty of twists and turns -- from the company's early biomedical days to its recent advances in developing a Zika virus vaccine. But this chart shows the story hasn't been great for investors.

Here's a brief overview of what has happened with Inovio Pharmaceuticals' stock over the last couple of decades. 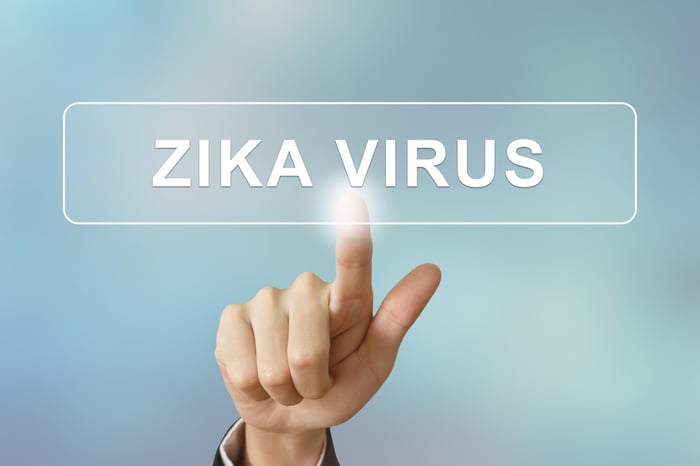 Inovio started out as Biotechnologies & Experimental Research, Inc. in 1983. The company's focus was on creating products for the research marketplace. In 1994, the company changed its name to Genetronics and went public by exchanging shares with Consolidated United Safety Technologies, which was listed on the  Vancouver Stock Exchange. Consolidated United Safety Technologies got its start back in 1979, and was initially named Concord Energy Corp. 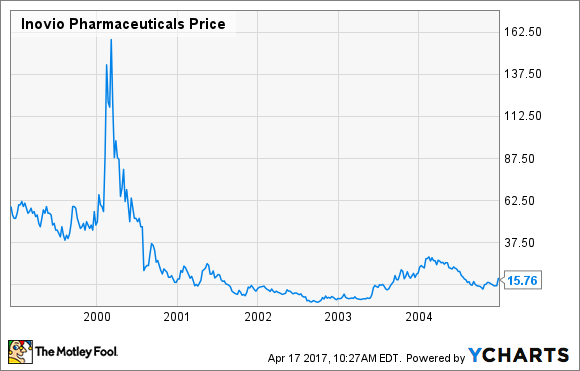 The company's focus during much of its early period as a U.S. stock was on electroporation, a technology for introducing DNA and drugs into cells through a brief electrical pulse that causes tiny pores to open in the cell membrane. Genetronics developed drug delivery systems using electroporation and sold electroporation equipment to the research laboratory market.

This period in the stock history wasn't the best for shareholders as Inovio faced several problems. 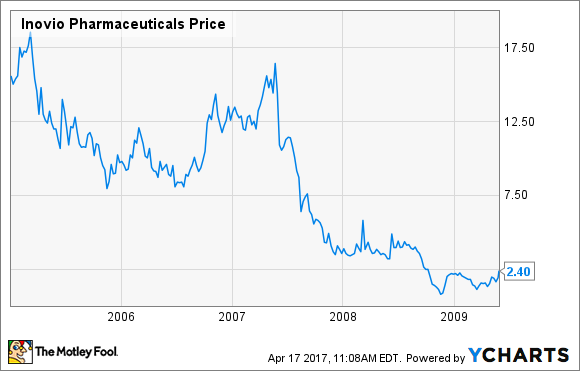 The company also had to restate its 2006 annual and 2007 quarterly financial statements. Inovio's audit committee found issues related to the classification of registered warrants issued by the company. In addition, like nearly every other stock, Inovio stock was hammered by the financial crisis that emerged in 2008.

Viral Genomix began operations in 2000 with a focus on developing DNA-based immunotherapies to treat infectious diseases and cancers. The company was renamed VGX Pharmaceuticals in 2006. On June 1, 2009, Inovio Biomedical merged with VGX Pharmaceuticals, picking up cervical dysplasia vaccine VGX-3100 in the process.

Inovio's pipeline at that time also included several early-stage and pre-clinical DNA vaccines targeting infectious diseases such as avian influenza, hepatitis C, and HIV. The company still, however, used its electroporation technology for delivery of the DNA vaccines into cells. 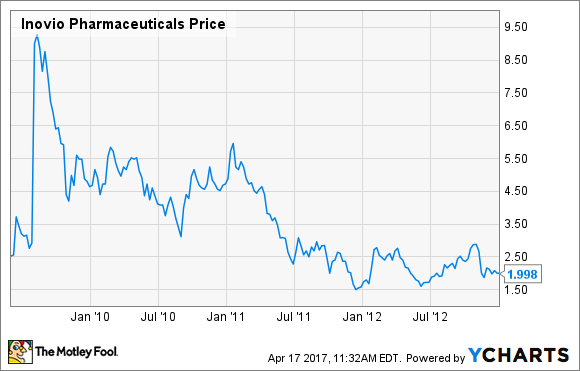 Inovio kept its focus on targeting viruses using DNA vaccines delivered through electroporation. However, the company also continued to study DNA vaccines for treating cancers not caused by viruses, including chronic and acute myeloid leukemia and prostate cancer.

The stock enjoyed two nice runs over the last four years. In 2013, the company reported encouraging pre-clinical results for its influenza DNA vaccine followed by more good news from a couple of early-stage studies for its HIV vaccine. There was even speculation that Inovio could be bought out. 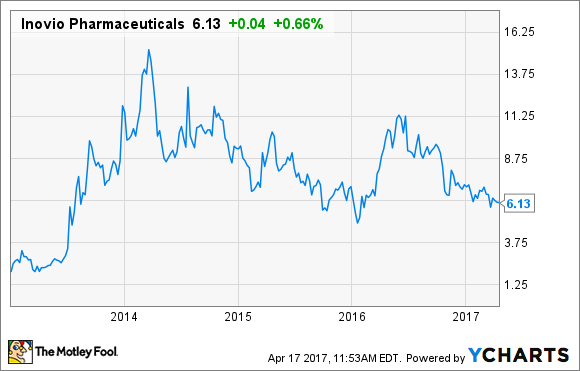 More recently, Inovio enjoyed a lot of positive publicity and investor excitement related to its Zika virus vaccine program. In June 2015, the company became the first to win approval from the U.S. Food and Drug Administration (FDA) to initiate clinical studies in humans for an experimental Zika vaccine.

However, Inovio also encountered an obstacle for its experimental VGX-3100 cervical dysplasia vaccine. In October 2016, the FDA placed a clinical hold on the company's planned late-stage study of the vaccine, requesting additional information about the delivery device.

What does the future hold for Inovio? The company still hopes to win approval for VGX-3100 and advance cervical cancer vaccine INO-3112, which combines VGX-3100 with DNA-based immune activator encoded for IL-12. Inovio would like to be first to market with a Zika vaccine. The company has come a long way from its Genetronics days -- but there's still a long way to go before Inovio can enjoy the success that its shareholders have long hoped for.

Why Inovio Pharmaceuticals Is Gaining Today
395%