Some extra risk for a greater reward might make the stock a good buy for you.

When AbbVie (ABBV -0.76%) split off from Abbott Laboratories at the beginning of 2013, the result was a company that combines some risk and appreciation potential with a high dividend. That unique combination could have a place in your dividend portfolio alongside more conservative holdings.

The AbbVie split was the inverse of the strategy taken by other large healthcare companies such as Johnson & Johnson and GlaxoSmithKline, where steadier consumer businesses balance against the ups and downs of the riskier pharmaceuticals segments. Abbott management, however, felt that the risks inherent in pharmaceuticals were weighing down the valuation of its more stable businesses such as nutrition and diagnostics, and that the units would be worth more apart than together. The pharma business was launched as the separate company AbbVie, taking with it the risks and potential growth inherent in its drug portfolio and pipeline, along with a generous cash flow to support dividend payments. 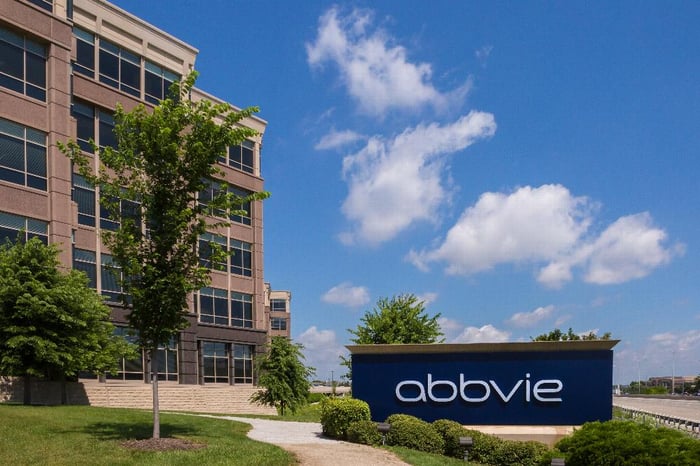 Since the split, AbbVie has received the most love from investors of the two, with the stock gaining 81% as compared with 60% for the S&P 500 and just 34% for Abbott. Despite this gain, AbbVie still sports a generous dividend yield of nearly 4% and a reasonable valuation, with a forward PE of just under 12.

A nice dividend that will likely continue to increase, and some growth besides

AbbVie has a strong history of dividend raises and should have no trouble continuing that into the future. When the history of the parent company is taken into account, it has raised its dividend annually for over 25 years, landing it on the Dividend Aristocrat list. Since the spinoff, the dividend has increased 60%, including 12% last year. The payout ratio -- the percentage of company net profit that is paid out in dividends -- was a reasonable 63% in the last 12 months, a good indication that the company will be able to continue rewarding its shareholders generously.

AbbVie's drug portfolio and pipeline hold the potential for good capital appreciation to go along with that dividend as well. Since 2013, AbbVie has grown revenue by 36% and earnings per share by 42%. Last year, adjusted revenue grew 13.3% to $25.6 billion, and adjusted EPS gained 12.4%. That kind of growth is hard to find in an established pharma company, and management expects earnings growth in 2017 to be even better, guiding to an increase of 13% to 15%. A growth component like this is a nice feature for a high-yielding stock like AbbVie, especially with a price of only 12 times analyst expectations for 2017 earnings.

There's more in the works, too, with a lot of promise in the development pipeline. AbbVie has made a big push into oncology in recent years, positioning itself to take a big slice of the hottest segment of the drug market. Imbruvica and Venclexta are recently approved blood cancer drugs that have the potential to address as much as 65% of what will be a $50 billion market by 2022. The company believes the eight most important near-term growth assets in its pipeline could bring in $25 billion to $30 billion in peak sales when they come to market.

The risk hanging over the stock

If a stock today yields 4%, is growing in double digits, and yet is selling below the market's typical valuation multiple, you know investors are pricing in some downside risk, and that is exactly the case for AbbVie. The big issue is AbbVie's anti-inflammatory drug Humira, currently the world's top-selling drug, with $16 billion in sales in 2016. This drug alone was the source of 63% of the company's revenue in 2016 and a good chunk of its growth. Key patents on the drug for arthritis, psoriasis, and Crohn's disease expired in the U.S. last year, and European patents will fall away in 2018.

Amgen already has a biosimilar developed and approved by the FDA, but AbbVie is staving off the threat with a legal challenge. Amgen can start shipping the drug before the issue is resolved in the courts, but if it does, it will be liable for damages if it loses the suit, which it may not want to risk. The court date is set for November 2019, so AbbVie may succeed in delaying that threat for a long time, if not defeating it altogether, given management's confidence in its portfolio of 110 unexpired patents it could use for defense.

Challenges for Humira also exist in the marketplace, with newer drugs from other drug companies coming on the scene. But AbbVie is also moving forward with late-stage pipeline drugs taking these new approaches -- called JAK1 inhibitors and anti-IL23 antibodies -- in position to take up slack from Humira losses.

A proper place in your portfolio

AbbVie has a generous dividend that it has no trouble paying and will likely continue to increase, current growth above the rate of its peers, and a decent chance of capital appreciation. Dependence on Humira makes the stock more risky than the typical position in a conservative dividend portfolio, but with the risk already priced into the stock and the strong possibility that the company can navigate the transition to new drugs to replace the Humira business over time, the stock is a good candidate to fill a legitimate, albeit a bit aggressive, role in an income portfolio.