Please ensure Javascript is enabled for purposes of website accessibility
Log In Help Join The Motley Fool
Free Article Join Over 1 Million Premium Members And Get More In-Depth Stock Guidance and Research
By Rick Munarriz - Apr 18, 2017 at 11:28AM

Cowen and Oppenheimer analysts feel that the "name your own price" travel giant is about to hit a big milestone when it comes to share price.

Priceline Group (BKNG 5.23%) may soon have a Y2K situation -- not that any bullish investor would mind that. A pair of analysts have recently boosted their price targets on Priceline stock to $2,000, a beefy milestone, but representing a mere 13% in upside based on Monday's close.

Kevin Kopelman at Cowen became the latest Wall Street pro to warm up to the new price target with some fresh research put out on Tuesday morning. Kopelman is reiterating his outperform rating, but boosting his price target from $1,850 to $2,000. Cowen's analyst feels that Priceline's growing pool of customers that tend to rely on the platform over and over make it the best-positioned stock in the online travel niche.

Kopelman isn't alone. Jed Kelly at Oppenheimer also increased his price target -- going from $1,860 to $2,000 -- on Thursday of last week. He also has an outperform rating on the dot-com darling. 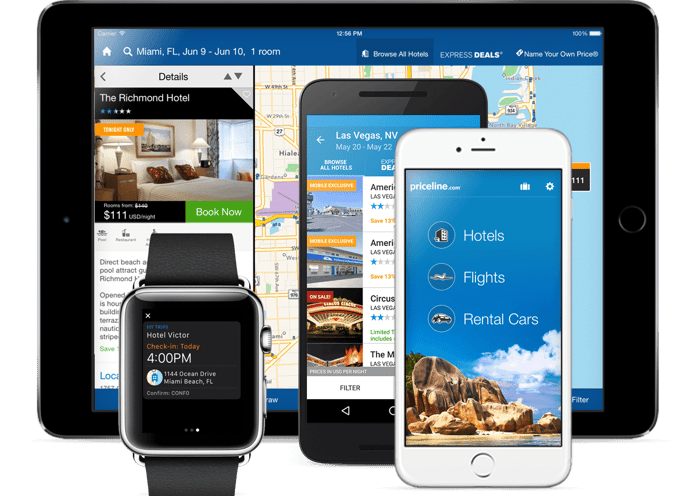 Priceline's already a beast internationally. Its Booking.com site finds Europe -- and not the U.S. -- as its leading revenue source for bookings. However, Kelly is also pumping up Priceline's strong position through China and other Asia Pacific markets in last week's bullish nod. Priceline is a globetrotter in every sense of the word.

Kelly feels Priceline should be able to drive earnings growth in the mid-teens, more than enough to justify its forward earnings multiple in the low 20s. Priceline may already be operating at a significant scale, and the second half of the year will be coming up against challengingly high room-night comparisons from a year earlier, but Oppenheimer's analyst feels that remaining in the bullish camp with a loftier price target is the right call.

Priceline reports quarterly results in early May, and having a couple of analysts jacking up their price targets three weeks ahead of the announcement could be a bullish sign. However, not every Wall Street pro feels that way.

A day before Oppenheimer's note, Naved Klein at Cantor stuck to his $1,850 price target. He feels that bookings are tracking toward the upper end of expectations, singling out improving trends in hotel rates in Europe and global air travel in general. He has a bullish overweight rating on the stock, but reiterating his $1,850 price goal doesn't leave a lot of upside from current levels.

The bulls still have control of the situation. They still believe in Priceline, even as it actually missed Wall Street's profit targets in three of last year's four quarters. Analysts generally feel that Priceline is in the right place at the right time, and if we go by the two most recent notes, the stock's next stop will be to break through the $2,000 ceiling.