After four years of wildly successful expansion in its beer business, supplemented by lucrative wine portfolio additions, Constellation Brands, Inc. (NYSE:STZ) might seem to be nearing a revenue plateau. But rather than fizzling out from sheer exhaustion, the Victor, New York-based alcoholic beverage giant is likely to continue to exhibit outperformance in the near to medium term, for two simple reasons that we'll dive into below.

The primary factor that will support Constellation's growth is unyielding market demand for the company's Mexican beer brands. Constellation hasn't scrimped in raising awareness for its major labels, which include Corona, Casa Modelo, and Victoria. For example, over the last five years, marketing and advertising spends for Corona have increased by double digits each year. 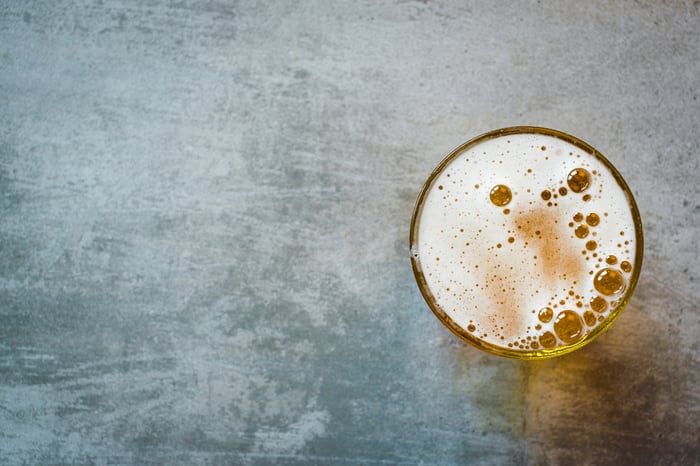 As the Mexican beers from the 2013 Grupo Modelo transaction have soared in major U.S. markets, they've become an important driver of volume and profitability not just for Constellation Brands, but for domestic beer wholesalers in general.

Whether created by Constellation, its wholesalers, or simply an American fondness for the refreshing taste of Mexican lager-style beers, demand is so high that the company's manufacturing capacity is fully absorbed for now.

Including the acquisition of its third Mexican brewery, in Obregon, Mexico, for $600 million in December, Constellation is on pace to commit $4.5 billion in beer capacity investments during the five-year period ending in December 2019. The organization finds itself in the enviable position of selling into fervid demand -- and having to allocate billions in capital expenditure just to keep up.

A premium push is lifting margins

During the last few years, Constellation has increasingly focused its acquisitions on premium wines and high-end beers and spirits. The Meiomi Wines acquisition and Ballast Point Brewery craft beer purchase, both completed in 2015, are two of the most visible examples of this push.

A slew of minority investments in small craft spirits housed through the company's "Constellation Ventures" arm also demonstrate its penchant for promising high-end beverages that can be expanded through its distribution channels.

Below is a slide from the company's presentation at the Consumer Analyst Group of New York conference in February, demonstrating the clear edge high-end and premium categories enjoy in growth rates in the U.S. alcoholic beverage market:

The rise of craft alcoholic beverages in all three major categories of wine, beer, and spirits is a market opportunity that Constellation has exploited adeptly as of late. The acquisitions of Meiomi and Ballast Point, as well as The Prisoner Wine Company in 2016, accounted for roughly $225 million in revenue during fiscal 2017, or three out of the company's 12 percentage points of revenue growth for the year ending on February 28, 2017.

While Constellation adds higher-margin beverages to its portfolio through acquisition and internal innovation, it's simultaneously pruning revenue streams that can't match the growth rates management prefers.

In December, the company completed the sale of its Canadian wine business for $775 million to the Ontario Teacher's Pension Plan. In the nine months of the fiscal year before the transaction was completed, the Canadian Wine Business recorded $289 million in sales. That's a significant chunk of revenue to give up, but management will reinvest the deal proceeds in businesses that support its profit preferences.

In another example of pruning, Constellation recorded an impairment charge of $37.6 million during the fiscal fourth quarter of 2017. CEO Sand's answer to an analyst clarifying this charge provides a sharp illustration of Constellation's margin discipline:

... on the impairments, that's really just a continuation of our premiumization strategy. So we had some wines, in particular, mostly sub-$5 labels we didn't sell a lot of cases of brands like Talus or Marcus James that we elected to discontinue in order to shrink the number of brands in our portfolio and drive the premiumization trend. So that was just good housekeeping, I would say, from a SKU management perspective.

The net effect of adding premium products while trimming underperformers can be found on the income statement: Constellation has increased its operating income margin by nearly eight percentage points over the last three years, to 33% in fiscal 2017.

Two primary risks challenge the drivers of Constellation's outperformance. First, the U.S. thirst for Mexican lager beers may diminish as Constellation hits optimum volume levels in major markets. But the company has taken care to differentiate its labels in marketing efforts so far, carving out shelf space for the beers mentioned at the outset of this article, as well as its next big expansion bet, the Pacifico Claro brand.

Second, a recession in the U.S. could potentially impede the company's growth as it tunes its portfolio to ever more premium wines and specialized craft beers and spirits. Still, the impact could be more muted than one might assume -- changing tastes, and especially the preferences of millennials, indicate that higher-quality alcoholic beverage products have become the norm in our consumption habits. That only bodes well for Constellation Brands over the long term.