Tuesday was a letdown following the market's gains yesterday, as the Dow Jones Industrials finished down more than 100 points and other major benchmarks posted modest losses. Earnings season has gotten off to a mixed start, with some pockets of the economy faring well while others are showing signs of potential trouble ahead. Although the overall market decline wasn't all that severe, some individual stocks took much larger hits, and Goldman Sachs (GS -0.36%), W.W. Grainger (GWW 1.21%), and Cardinal Health (CAH -1.80%) were among the worst performers on the day. Below, we'll look more closely at these stocks to tell you why they did so poorly.

Goldman falls down on the job

Shares of Goldman Sachs dropped nearly 5%, leading the Dow lower as the investment banking giant released lackluster financial results for the first quarter. Both revenue and earnings were weaker than investors had expected, and Goldman blamed poor performance in its trading business for much of the shortfall. In particular, Goldman's revenue from stock trading was down by more than $100 million from the year-ago period, which is somewhat surprising given the company's reputation for excellence and the stock market's advance during the first quarter. Moreover, CFO Martin Chavez said that commodities and currencies also hurt Goldman's results, noting that the company "could have done a better job navigating the markets." The news was particularly shocking given that the Wall Street giant's competitors didn't make similar missteps, suggesting that even Goldman Sachs is vulnerable to volatile markets and occasional lapses in judgment. 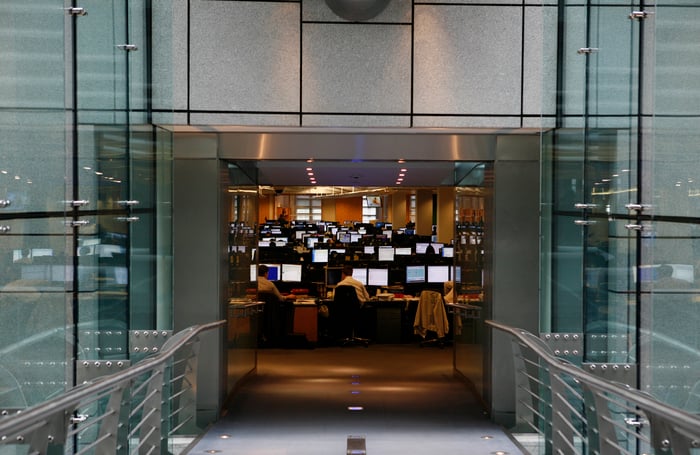 W.W. Grainger stock declined 11% in the wake of discouraging results in the company's first-quarter financial report. Sales climbed just 1%, and Grainger's bottom line was off 6% from the year-ago quarter, leading to a miss on earnings per share. CEO DG Macpherson blamed the poor quarter on "stronger than anticipated customer response to our U.S. strategic pricing actions, with a greater volume of products sold at more competitive prices." Moreover, Grainger said that it would accelerate its future planned pricing moves into the current year, in the hopes that by taking an earnings hit currently, the industrial supplier will be able to expand its customer list and get existing clients to boost their order volume. Investors don't seem so sure, but despite expecting just 1% to 4% sales growth and cutting earnings expectations by more than $1 per share for 2017, Grainger remains optimistic about its future.

Finally, shares of Cardinal Health fell 12%. The company made two moves that seemed to alarm investors today, announcing that its fiscal 2017 adjusted earnings would come in at the bottom end of its previous guidance range and issuing new guidance for the 2018 and 2019 fiscal years. Yet what seemed to get more attention from investors was Cardinal's decision to buy the patient care, deep vein thrombosis, and nutritional insufficiency businesses of Medtronic for $6.1 billion in cash. Cardinal will raise $4.5 billion in debt, which prompted rating agencies to look at the company's bond rating and potential negative implications going forward. Even though Cardinal argues that the move will add to earnings by next year, investors seem worried that it comes at a dangerous time for the drug distributor and could backfire on the company later.