I'll be the first to admit that Shopify (SHOP -5.23%) isn't a cheap stock. It has shot up over 400% since February of last year, and now trades for a nosebleed 19 times sales. At this point I would caution strongly against "backing up the truck."

And yet, in its short time as a public company, Shopify has become one of my larger holdings, constituting 3.7% of my portfolio. I will be adding to that at better and better value points over time -- a strategy I suggest fellow Fools consider. But given the 10 factors below, I have no intentions of selling Shopify stock. 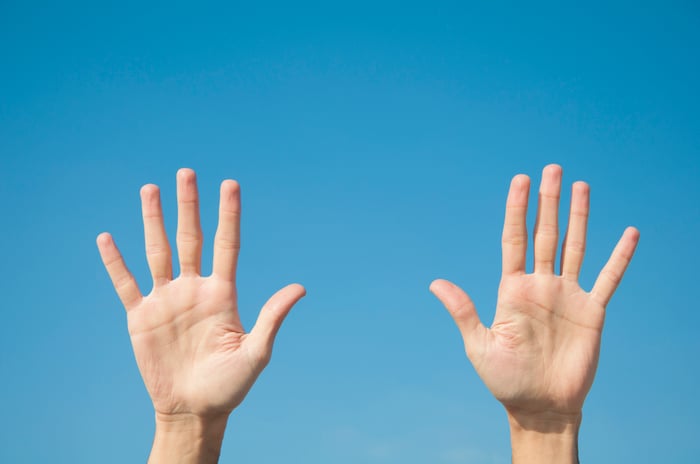 1. Leadership has skin in the game

I've always been a fan of founder-led companies, but that's doubly the case when founders have lots of their own skin in the game. Tobias Lutke founded Shopify as a way to sell snowboards for a different company. Over time, he found that the e-commerce platform was a better business than the snowboarding one.

As of the company's last proxy filing, Lutke -- along with his other officers and directors at the company -- owned 14 million Class A and Class B shares combined, worth about $1 billion, and representing 59.7% of the voting power.

2. Shopify has a wide and growing moat

Once a vendor has set up an e-commerce presence on Shopify's platform, it would be loath to switch to another provider. That's because all of the information and systems are already in place, and all employees have been trained on the platform.

Switching providers is not only expensive, but it creates a logistical headache, requires downtime, and distracts the vendor's management from accomplishing their own goals. As one software developer put it: "Migrating a pre-existing store from one platform to another is, candidly, a royal pain in the [butt]." This helps create Shopify's "moat."

When there are high switching costs associated with your company, that means incremental gains in revenue are a lot stickier than in other industries.

And by almost any measure, Shopify is growing like a weed:

That chart shows that revenue and gross profit have grown at rates of 100% and 82% per year, respectively, since 2012!

4. The company is mission-driven

Shopify has a simple mission: to make commerce better for everyone.

There are two key components that make this mission statement so powerful. First, it is easy enough to understand that it can serve as a compass for everyone working at the company. If employees have questions about what to do in any given situation, they can ask themselves, "Would this make commerce better for everyone?"

Second, it opens the company up to a host of future business avenues. While Shopify is focused right now on e-commerce platforms, there are several other ways that the company could make commerce better for everyone.

5. Management's commitment to this vision has been tested...and survived

Following the election of Donald Trump, the group SumOfUs called on all organizations to boycott Breitbart News. The syndicate's former boss -- Steve Bannon -- had become the White House's chief strategist, and SumOfUs believed that Breitbart's message -- which some see as racist and misogynistic -- might start to carry more weight.

Many companies boycotted, but largely in the form of removing ads from Breitbart's website. Shopify was in a different position: It was the e-commerce solution for Breitbart. Unlike other companies that could simply remove their ads, Shopify was being called on by SumOfUs to deny service to Breitbart.

Lutke didn't hide his distaste for the site, saying, "We don't like Breitbart," but he continued:

Commerce is a powerful, underestimated form of expression. We use it to cast a vote with every product we buy. It's a direct expression of democracy. This is why our mission at Shopify is to protect that form of expression and make it better for everyone, not just for those we agree with.

Even with his back against the wall, Lutke stuck to his core mission -- even if it meant making commerce better for those he didn't like.

6. The company has a solid balance sheet

For a young company that has yet to turn a profit, Shopify has a very solid balance sheet. As of the end of 2016, Shopify had $932 million in cash and short-term investments on hand, versus no long-term debt. That should assuage fears about its lack of profitability, as the company is making the right long-term move by investing in growth opportunities.

7. There is very little concentration of risk

As the Breitbart fiasco has shown -- with some, but not many, vendors choosing to leave Shopify -- the company is not heavily reliant on any one vendor to provide an enormous slice of the sales pie. In fact, take a look at how Shopify's roster of vendors has grown over time:

Optionality is the ability to test out new ideas that have limited downside and unlimited upside potential. Most of the time, these new ideas will fail, but with each failure, the company only loses a little money, but gains critical information that can help ensure future success. All it takes is one big "new idea" to be a success to meaningfully move the company's sales needle.

As we already saw, Shopify's mission lends itself to this type of optionality. Already, the company is experimenting with flash-sales apps, shipping solutions, inventory management, and a host of other related solutions. The risk is merely the modest costs associated with each idea, but outsized rewards are possible if any of them take off.

According to Glassdoor.com, employees give Shopify a 4.3 rating out of 5, a very high mark. Additionally, 83% who made an opinion known on the site said they would recommend working there to a friend, and 90% approve of the job that Lutke is doing.

When you have a motivated work force, it is much easier to take advantage of opportunities hiding in plain sight.

10. The big players have already surrendered

Facebook and Amazon.com tried their hands at creating their own e-commerce platforms -- for use on their respective websites. Eventually, however, they saw that it made more sense to just partner with Shopify and make it the preferred provider on their platforms.

That vote of confidence speaks volumes to the advantages that Shopify has, and why investors should think twice (and thrice, and four times...) before parting with their shares. As long as these elements remain in place, I plan to buy more and hold my shares of Shopify forever.