The odds are stacked in the Mac maker's favor.

With Facebook (META -1.75%) making a big official push into augmented reality (AR) yesterday, complementing its virtual reality (VR) efforts, will the same scenario play out once again for the Mac maker? 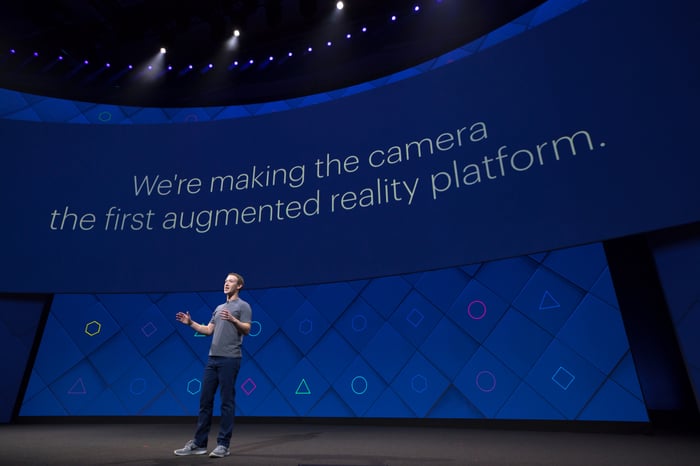 Cook has made no secret of how much potential he sees in AR, believing that the nascent technology could be truly transformative since unlike VR, AR doesn't isolate you from the real world. In characteristic fashion, don't expect Apple to unveil whatever it's up to until the company feels like it's ready for mainstream adoption. In contrast, Facebook is taking the more traditional Silicon Valley approach of incremental iteration.

The social network's new Camera Effects Platform currently just focuses on photo and video filters as a form of expression. Apple's new Clips app offers similar functionalities, which may very well be the foundations of its AR strategy, but Apple isn't calling anything a "platform" quite yet like Facebook is. Apple is also expected to include some AR functionalities in upcoming iPhones, potentially as early as this year. Longer term, both companies appear to be working on AR glasses as the delivery mechanism for an AR platform.

The hardware will be a critically important aspect, and fashion preferences have a lot of bearing on wearable technology. Alphabet's Google Glass was too early for its time, and the super futuristic aesthetic was alienating, which may have contributed to that device's failure. Facebook is relatively new to the hardware game, but has been beefing up its hardware talent. The company poached Rich Heley last year from Tesla to join its Building 8 hardware team, where he currently serves as head of manufacturing; Heley was previously a hardware director at Apple.

Meanwhile, hardware is one of Apple's greatest strengths, so expectations around Apple AR glasses will be (and should be) quite high. Apple also has much more experience constructing and operating computing platforms (as opposed to a social platform) on a massive scale. Additionally, Apple can leverage its broader product ecosystem to deliver more integrated AR experiences that leverage other Apple products a customer might have.

The odds are stacked in the Mac maker's favor.

AR platforms may not be mutually exclusive

It's worth pointing out that AR platforms may not be mutually exclusive. While the primary platform may very well be tied to what hardware a customer buys, it's quite conceivable that in addition to making AR glasses, Facebook could build its platform on top of other platforms, too, much like its current social platform is primarily built on third-party mobile platforms like iOS and Android.

If Apple's underlying AR platform proves to be more successful, with greater mainstream adoption, there wouldn't be anything stopping Facebook from creating an AR app for Apple's platform to deliver the AR experiences that Zuckerberg envisions. On the flip side, it's unlikely that Apple would pursue such a strategy, as it always sticks to its own walled garden.

It's still early days in AR, and the coming years will see major AR investments and competition from all the major tech giants. That's good news for consumers.