Please ensure Javascript is enabled for purposes of website accessibility
Log In Help Join The Motley Fool
Free Article Join Over 1 Million Premium Members And Get More In-Depth Stock Guidance and Research
By Chris Neiger - Apr 19, 2017 at 11:32AM

The company, which specializes in making the equipment other tech companies use to manufacture chips and displays, brought in 88% of its net sales last year from two business segments.

Applied Materials (AMAT -5.18%) is one of those businesses that you don't think much about, but it plays a key role in the broad technology market. The company makes manufacturing equipment for semiconductor and display makers, and also provides software and services to customers in the industry.

It breaks its key revenue segments down into three main categories: semiconductor systems, applied global services, and display and adjacent markets. The first two categories contributed 88% of the company's net sales in 2016, so let's take a closer look at those two, examine how much revenue they made, and if they're growing. 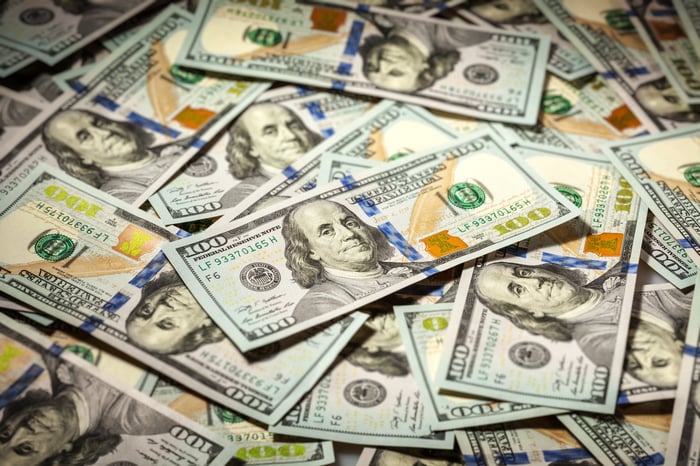 The semiconductor systems business consists of the development, manufacturing, and sales of semiconductor manufacturing equipment to chip foundries around the world. The segment generated 64% of Applied Material's sales in fiscal 2016, the same percentage it represented in 2015, and down slightly from 66% in 2014.

The company is a dominant player in the wafer-level semiconductor manufacturing equipment space; according to Gartner's yearly report, Applied had 19.1% of the market in 2016, and CEO, Gary Dickerson said on the Q1 2017 earnings call that he believes his company's position has expanded its share.

In short, this segment represents the certified services for tooling equipment for maximum productivity, consulting services, a spare parts program, legacy equipment upkeep, automation software, and subfab equipment sales. The company has a vast network of specially trained service engineers in a dozen countries and 82 locations around the world that allow the company to assist its customers..

Here's a quick look at Applied Material's sales over the past three fiscal years: 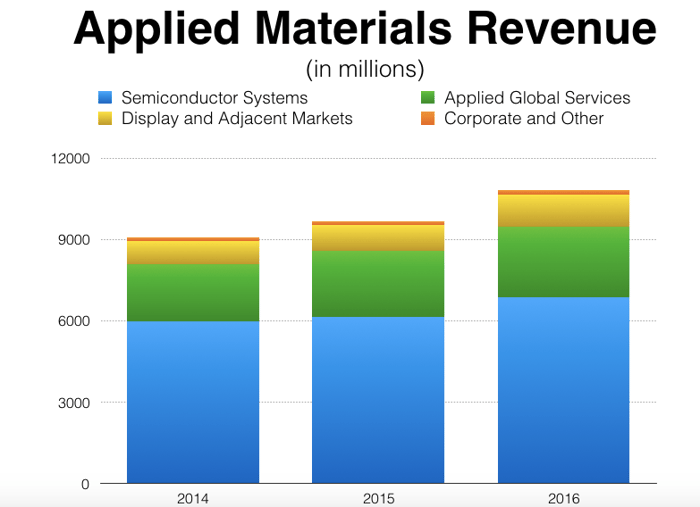 Total revenues increased 12% from fiscal 2015 to 2016. The company's slow and steady growth has helped spur investor confidence and raise Applied Materials' stock price 75% over the past 12 months.

And there's likely more for investors to look forward to. Management said it anticipates net sales in the range of $3.45 billion to $3.6 billion in the fiscal second quarter. That would represent a year-over-year increase of about 44% at the midpoint. Applied is coming off a quarter where its semiconductor system orders hit at a 16-year high and AGS saw record orders as well.

For investors, the takeaway is clear -- keep an eye on these two business segments to gauge how well the company is doing.