Please ensure Javascript is enabled for purposes of website accessibility
Log In Help Join The Motley Fool
Free Article Join Over 1 Million Premium Members And Get More In-Depth Stock Guidance and Research
By Reuben Gregg Brewer - Apr 20, 2017 at 11:23AM

Hormel, Shell, and Target: It's a risk spectrum, but each has a place for the right dividend investor.

If you're like me, you're always on the lookout for a good dividend stock. One thing that always draws me in is a dividend yield that's high relative to a company's own history. On that score, Hormel Food Corp. (HRL 2.29%), Royal Dutch Shell plc (RDS.B), and Target Corporation (TGT 2.46%) all caught my eye, and each could be a solid buy -- for the right dividend investor.

1. Boring can be beautiful

I recently added Hormel foods to my portfolio with a yield of 2%. That's not the highest the yield has ever been, but it is on the high end of the company's historical yield. Backing that up is a trailing P/E that's about 9% below the five-year average.

To be fair, other valuation metrics, such as price to book and price to sales, point to a slightly above-average valuation. The thing is, good companies don't go on sale very often, and I'm willing to forgo a great price to get in the door here. Basically, it looks to me as if 2% is a fair yield for Hormel.

Why not wait for a fire sale? Hormel has raised its dividend annually for 51 years. Its trailing annualized dividend growth rate over the past decade is just over 15% -- roughly five times the historical rate of inflation. Debt, meanwhile, accounts for a scant 5% of the capital structure. And while Hormel is probably best known for making Spam, it's been expanding into new areas through acquisitions of names such as Muscle Milk, Wholly Guacamole, and Justin's nut spreads. 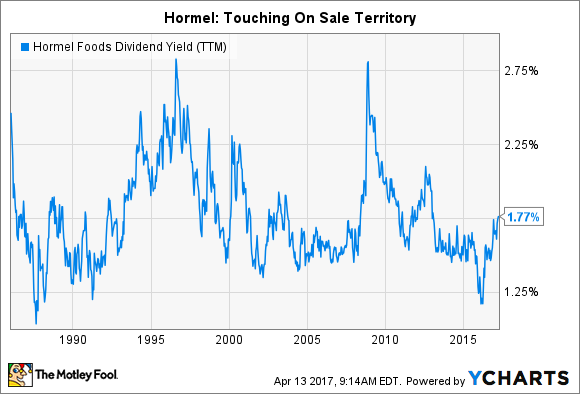 Hormel is never going to be exciting, but at a 2% (or so) yield, it's nibbling at sale territory. If the yield goes higher, I'll happily buy more. If it doesn't, I certainly won't be upset with the price I paid, and neither would most conservative investors.

2. A problem on the mend

The next stock is Royal Dutch Shell plc, with a 6.6% yield. That's toward the high end of this company's history, though it's been higher on a couple of occasions.

There are two problems facing Shell today. The first is low oil prices. But that's an industrywide issue, and Shell is working to adjust, just as every other oil major is. The second is a relatively high debt load. That one was by design, driven by Shell's acquisition of BG group in 2016. The $50 billion deal increased the company's debt by 50% in a single year -- during an industry downturn.

That situation now has investors worried that the dividend will get cut. Shell, however, is well aware of the debt overhang and plans to sell up to $30 billion worth of non-core assets. It's already sold or agreed to sell roughly $20 billion of that total. And the natural gas and deepwater oil assets it picked up with BG are expected to be key building blocks of its future. Assuming Shell follows through on its debt plans, which looks like a reasonable expectation, the BG deal looks to have been a well-calculated risk. 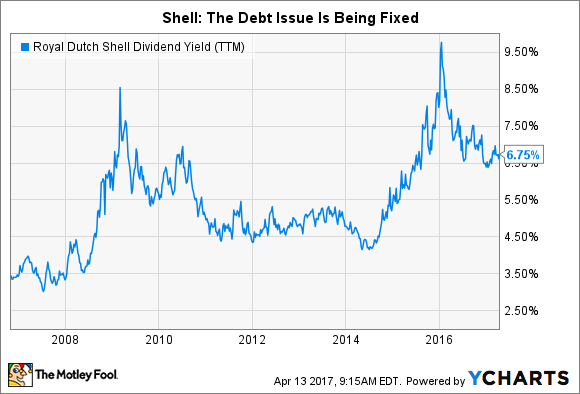 Investors willing to accept a little extra risk to get a higher yield should like the direction Shell is going in. Time is of the essence, however, since every asset sale makes the dividend that much more secure. And, eventually, I expect income investors to step back in and push the yield lower again.

3. The bull's-eye is moving

Target's 4.5% yield is appropriate only for aggressive investors because the company is having a hard time adjusting to a fast changing retail landscape. The big problem is a broad consumer shift toward online sales.

But sometimes adversity can present opportunity for intrepid investors. For example, Target's yield is higher today than it's ever been in the company's long history. That history, by the way, has included 49 consecutive annual dividend increases. Mix these two facts together, and income investors should definitely be doing a deep dive here -- even if they don't hit the buy button.

Target has already warned that sales will be weak through 2017 as it works to shift its business around to better fit the current market environment. That means that 2017 is going to be a transition year, highlighted by increased spending on things like its online sales platform, new store formats, and supply chain efficiency. 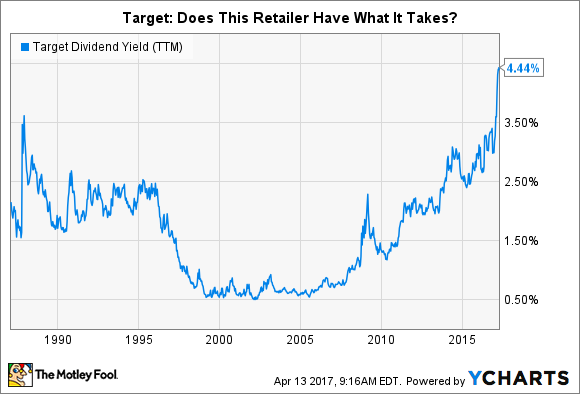 There's no guarantee that the changes Target plans will help it successfully navigate the new retail landscape, which is why the stock is most appropriate for aggressive investors. However, the giant retailer has a long and successful history that suggests it can shift with the times. Moreover, despite the headwinds, it remains highly profitable. The company expects earnings to fall between $3.80 and $4.20 per share in 2017.

That's a drop from 2016's $4.58 a share, partly reflecting the spending Target plans during the year to reposition its business. But it is more than enough to cover the $2.40 annual dividend per share, with some room left over for another increase. You should be taking a close look at Target and its 4.5% yield if you believe it can successfully adjust to the increasingly digital retail world.

Hormel, Shell, and Target offer dividend investors options across the risk spectrum. Hormel is like a tortoise, but a yield around 2% is pretty compelling for this rock-solid company. Shell, meanwhile, is moving aggressively to lower its debt and assuage concerns about its ability to cover its dividend. It's making a lot of progress, and the 6.6% yield may not last for long. Target is the most aggressive of this trio, since it's facing something of an existential threat. But for an aggressive investor, the 4.5% yield is higher than it's ever been before.