When deciding between two high-yielding midstream companies with impressive distribution increase histories, most investors should err on the side of safety.

Midstream giant Enterprise Products Partners L.P. (EPD 0.80%) has increased its distribution for 20 consecutive years and yields roughly 6%. Relatively tiny Buckeye Partners, L.P. (BPL) has increased its payout for 22 years running and has a 7.2% yield. Since both oil and gas midstream players offer impressive yields and solid increase histories, which is the better choice? In this case, the lower yield might be the better choice for most investors.

The thing about Enterprise is that it's huge. In fact, with a market cap of nearly $60 billion, it's one of the largest energy companies in the United States and easily one of the largest midstream names. That's both good and bad. For example, with a market cap that large, it takes big projects to move the needle on the top and bottom lines. To put a number on that, Enterprise is working on roughly $7 billion worth of projects over the next year or two. 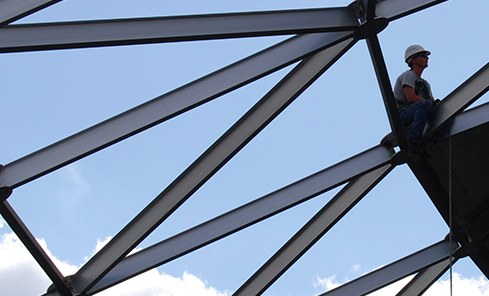 Slow and steady growth is the most likely outcome here, so if you're looking for a swiftly rising distribution, you'll need to look elsewhere. But with scale comes diversity. For example, Enterprise owns pipelines, terminals, processing facilities, and even ships! That gives it a broad base to support continued distribution increases and allows it to put money to work where it sees the most opportunity.

Buckeye Partners, meanwhile, is a much smaller partnership with a market cap of just under $10 billion. It's hard not to notice that Buckeye's distribution yield is higher than Enterprise's and that it has an even better record of annual increases. In fact, there's a lot to like about Buckeye, notably including the partnership's successful efforts to diversify the business.

In 2010, roughly 90% of Buckeye's adjusted EBITDA came from domestic pipelines and storage facilities. After spending around $8 billion on acquisitions and internal growth between 2010 and 2016, that number is down to 55%, with the partnership's global terminals business going from nothing to around 40% of adjusted EBITDA. Meanwhile, adjusted EBITDA has steadily risen every year. Clearly, there are things to like, here. 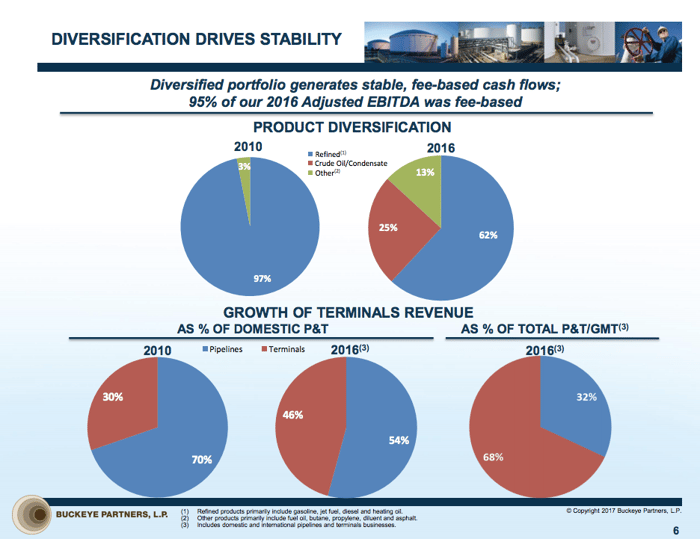 Buckeye has been changing its business for the better. Image source: Buckeye Partners, L.P.

Buckeye's business is centered around marine terminals and storage facilities. That's not a bad thing, but it does make Buckeye a far more focused operation than Enterprise. If the terminals business starts to falter, Buckeye doesn't have any other levers to pull to keep its overall business humming along. It's a big-picture risk, but one conservative investors should think about very carefully. I'd ask this question: "Is the extra yield worth the chance of sleepless nights should Buckeye's terminals business come under pressure?"

To put that into perspective, Buckeye's distribution coverage fell below 1 in 2013 and 2014, meaning distributable cash flow wasn't enough to pay its distribution. There were legitimate concerns that Buckeye would be forced to cut or at least hold off on further increases. Clearly, it kept chugging along, but it was a tough time to stick by management. Today, Buckeye's coverage ratio is a healthier 1.09 times, but that's still not as high as Enterprise's 1.2 times.

As you look at Enterprise and Buckeye, you really need to think about the bigger picture. Buckeye is a well-run partnership with a strong history behind it, but it is very focused on the terminals and storage business. That's been a distribution coverage problem in the past, and it could easily be a problem again in the future. For most investors, particularly those with a conservative bent, the extra risk that brings into the picture probably isn't worth it.

Larger and more diversified Enterprise, meanwhile, can easily shift gears and put money to work where it sees the best opportunities. Because of its size, growth in the business and the distribution are likely to be slow. But slow and steady isn't such a bad thing when you start with a roughly 6% yield. Even though I think Buckeye Partners is a well-run partnership, the vast majority of investors would be better off owning Enterprise.

Up 18% in This Bear Market, Is Enterprise Products Partners Still a Winner?