A chart is worth a thousand words.

T-Mobile's ( TMUS -2.05% ) aggressive pursuit of growth over the past few years has already been paying off, but Verizon Communications' ( VZ -0.59% ) earnings report this morning showing that it lost retail customers for the first time represents an important inflection point in the U.S. wireless industry. While T-Mobile has been poaching customers from all other carriers for years, the dominant domestic wireless carrier has held up relatively well despite intensifying competition -- until now.

Big Red has relied on its brand strength and strong retention of valuable postpaid subscribers to defend itself, and has only made modest concessions in response to T-Mobile's various Un-carrier initiatives, which now number over a dozen different moves to upend the industry. Verizon's latest reactive effort was relaunching unlimited data plans in February, which were still priced at a premium relative to T-Mobile One. For what it's worth, Verizon says that Verizon Unlimited helped mitigate some of the customer losses in the first quarter; it ended up losing 307,000 net postpaid customers, but would have lost 398,000 if it weren't for Verizon Unlimited. Never one to let up, T-Mobile poked fun at the date of Verizon's earnings release, insinuating that Verizon may have been celebrating the "holiest of high days" (bonus points for puppy memes). In an emailed statement to CNBC, Verizon responded:

We like puppy memes too. But today, like every day, we're focused on improving America's most reliable network. We're also busy enhancing our network to handle 3D, virtual reality and holographic puppy memes.

Verizon is still the market leader by far, but T-Mobile has been making incredible progress growing its customer base. Verizon closed out the first quarter with 113.9 million total retail connections. T-Mobile hasn't reported first-quarter results yet, but finished 2016 with 71.5 million total customers (including wholesale) after adding 6.6 million throughout the year. Verizon does not report wholesale connections, and for reporting purposes Verizon's "retail" connections are synonymous with T-Mobile's "branded" customers.

For comparability purposes, if we stack up T-Mobile's branded net additions next to Verizon's retail net additions (excluding wholesale for both carriers), the aforementioned inflection point becomes clear: 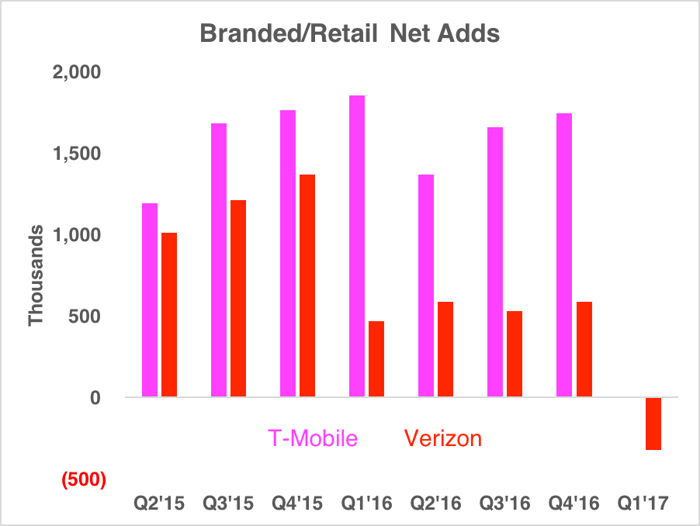 The U.S. wireless market is quite mature at this point, and overall isn't really growing all that much any more in terms of connections and customers. As the market leader, it makes sense that Verizon has struggled to find growth, while T-Mobile has been growing by gaining share and stealing customers.

There are still revenue growth opportunities as data consumption continues to rise, driven in large part by mobile video, and carriers attempt to monetize that increased usage. The tough part is that aggressive pricing is the key to T-Mobile's success (in addition to savvy marketing campaigns that appeal to younger demographics), which undermines efforts to increase average revenue per user (ARPU); T-Mobile's branded postpaid phone ARPU was effectively flat in the fourth quarter ($48.37). Verizon reports average revenue per account (ARPA), which includes all lines in an account, and as such isn't directly comparable with T-Mobile's ARPU metrics; Verizon ARPA was $136.98 last quarter (down 6%).

Overall, the Un-carrier continues to crush it, while Big Red searches for growth elsewhere.