What’s next for Sony, Microsoft, and Nintendo.

As we can see in the following graph (which doesn't include Switch figures yet), Nintendo's 3DS is currently the most popular console in the world, followed by Sony's PlayStation 4 (figures are units shipped since each console's launch). 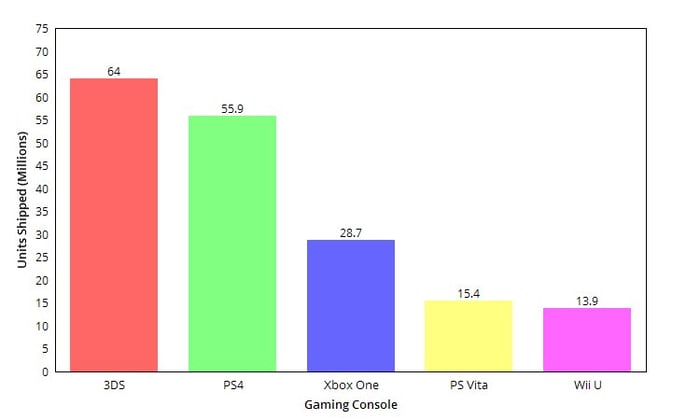 The longevity of Nintendo's 6-year-old 3DS is impressive, since smartphone games were expected to render handheld consoles obsolete. Its popularity was mainly fueled by compact versions of Nintendo's hit first-party franchises like Pokemon, Mario Kart, and Super Mario 3D Land.

The PS4 and Xbox One offer many similar high-end games, but Sony is differentiating its console with the new PlayStation VR headset. The Xbox One doesn't offer a comparable virtual reality (VR) product yet, but it lets Windows 10 users stream their console games to PCs. Both companies are upgrading their consoles for 4K gaming. Sony launched the PS4 Pro last autumn, and Microsoft plans to launch a more powerful Xbox One, codenamed Project Scorpio, later this year.

The video gaming market will likely be fragmented this year, with casual gamers favoring the Switch and hardcore gamers focusing on 4K and VR gaming with Sony's and Microsoft's updated consoles. Investors will be watching carefully to see if Nintendo's attempt to merge the handheld and home console markets helps it reinvent the market it revolutionized three decades ago. If so, Sony and Microsoft might need to respond with similar hybrid plays.