Highlights from the dealership group's first quarter and what it reveals about the health of the auto industry.

As new-vehicle sales peak in the U.S., inventories are swelling a little bit more than usual and incentive spending is picking up. Automotive investors are anxiously waiting to get any glimpse or forewarning of deteriorating industry health. Investors will have a much better idea of where the industry is headed once major automakers report later this week, along with America's largest dealership group, AutoNation. But if Lithia Motors, Inc. (LAD -0.47%) is any indication, the good times are still rolling.

Don't tell Lithia Motors the automotive industry's good times are over: The company just posted a strong first quarter 2017. Revenue jumped 12.8% compared to a year ago, to $2.24 billion, which was in line with consensus estimates from Thomson Reuters. On the bottom line, Lithia Motors’ adjusted earnings rose to $1.78 per share, a healthy 14.8% gain over the prior-year figure. 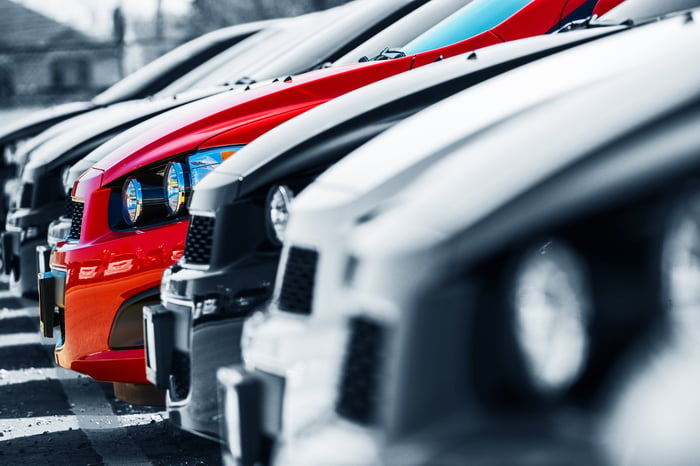 To better understand what was driving Lithia Motors' strong results, and to perhaps get a glimpse into the industry's health, let's break it down into segments.

Lithia's results emphasize a couple of different takeaways depending on what angle of the automotive industry you're looking at. For dealership groups, especially those with a diverse business model that includes finance, insurance, and service, the plateau of the U.S. new-vehicle market is less worrisome than it is for investors in major automakers. Look at the sustainability of Lithia's peer group compared to the slowing growth of the industry's seasonally adjusted annual rate of sales (SAAR).

From a different angle, one that resonates more with investors in major automakers, it's positive news that retail revenue per new vehicle and used vehicle continues to move higher. This gives the industry a little more wiggle room as incentives also increase, and impacts the bottom line that much less. There's still a large need for major automakers to balance inventories and incentives, so that trend doesn't change, but as long as retail demand remains healthy and plateaus rather than declines drastically, there's plenty of opportunity to generate record or near-record profits in the near term.

Ultimately, if Lithia is any indication, the industry is still healthy enough to support strong profits, but investors might consider having some exposure to dealership groups with proven service and financing business segments, as those are much more proven to support overall business amid a downturn.