Here's how the headline figures stacked up against the prior-year period: 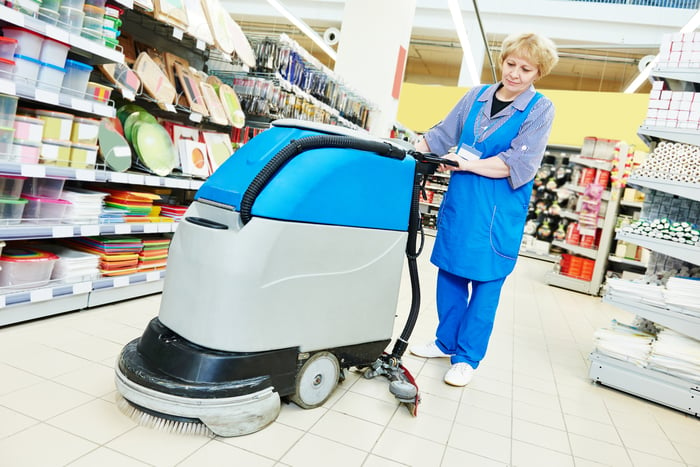 Executives said they were pleased with increased selling pace they managed. "During the quarter," CEO Chris Killingstad said in a press release, "we continued to pursue strategies designed to further ignite the company's growth and increase profitability."

A few of these moves included the purchase of IPC Group, which doubles the company's market access in the Europe, Middle East, and Africa geography, and the launch of popular cleaning devices like a new line of commercial walk-behind scrubbers. "Our new products are being well received by customers," Killingstad noted, which is why the company is focused on "developing innovative new products and technologies that fuel our revenue growth."

Tennant's expansion pace is highly dependent on its success at rolling out improved products that resonate with the customer base. That's why it's particularly good news that the company is executing well on this score. Just under half of this past quarter's revenue, for example, came from products that Tennant has introduced in just the last three years. That performance beat management's 30% target by a wide margin.

The surprising popularity of new releases helped give Tennant confidence to raise its 2017 outlook to a growth range of between 1% and 3% compared to the 0% to 3% range the company issued in late February. Executives see steady growth in the U.S., modest improvement in Europe, and continued challenges in the China segment.

Restructuring charges and expenses tied to the IPC Group purchase will push earnings down to between $1.05 and $1.25 per share this year to represent a sharp drop from 2016's $2.63-per-share result. However, the company believes both moves will lead to faster, more profitable growth over the long term.

Tennant Cleans Up in the Second Quarter

Tennant Closes Out 2018 With a Sales Growth Win