United Technologies and Ducommun are good value stocks in the aerospace sector.

First up, it's worth noting that United Technologies and Ducommun are both Boeing and Airbus suppliers, so the shifts in production patterns at both aircraft manufacturers have a profound effect on both companies' prospects -- a point I will return to later .

Based on Boeing's planned deliveries of 760 to 765 aircraft deliveries in 2017, the company's backlog of 5,744 means it has roughly 7.5 years' worth of backlog on its books. Moreover, more passengers usually mean more miles flown and more aftermarket revenue -- all good news for aerospace companies. Or is it?

In the long term, it's good news. But investors should be aware that as suppliers shift from work on legacy aircraft such as the Boeing 777 onto new aircraft platforms such as the Boeing 777X or the Airbus A320neo, there will be some transitional difficulties. As you can see in the chart below, operating-income performance has been varied in recent years: 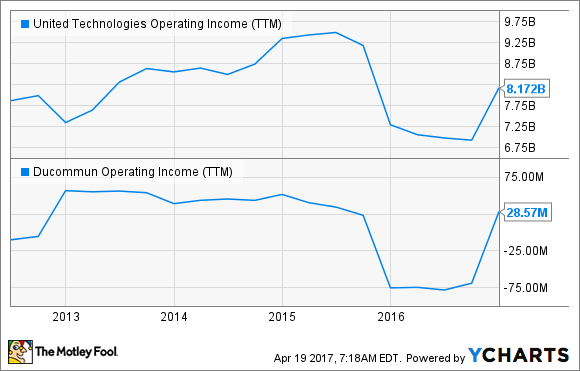 But here's the thing: Both companies have taken significant steps to position themselves for long-term growth. And on the basis of forward enterprise value (market cap plus net debt) to earnings before interest, tax, depreciation and amortization (EBITDA), they trade at a discount to the leading players in the aerospace industry: 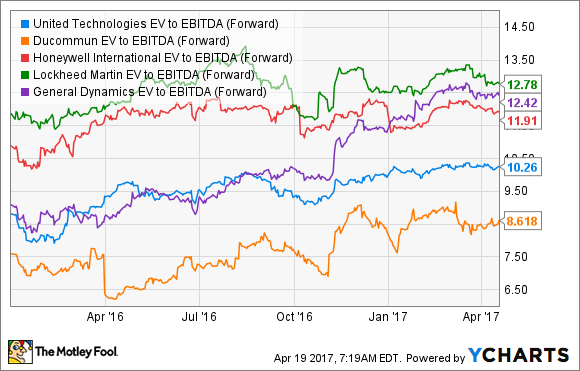 United Technologies subsidiaries Pratt & Whitney and UTC Aerospace Systems together contributed 43% of overall company segmental operating profit in 2016, but profit growth was held back by two factors: a negative impact on margin due to the mix of commercial original-equipment (OE) sales, and the production ramp on Pratt & Whitney's new geared turbofan (GTF) engine -- an engine which has around 50% market share of Airbus A320neo engine sales. 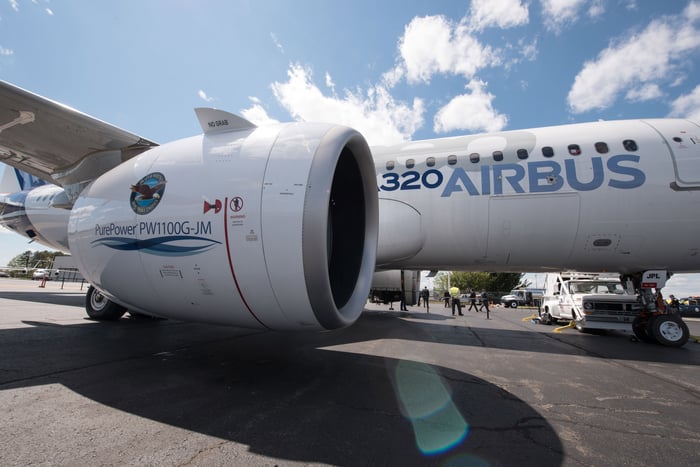 Meanwhile, GTF cost per unit is expected to decline as production is ramped up from around 150 in 2016 to a range of 350 to 400 in 2017, and CFO Akhil Johri expects negative engine margin (losses taken on engine sales before aftermarket, maintenance, and service revenue kick in) to peak at $1 billion in 2018.

As you can see below, management forecasts that adjusted operating-profit growth for both segments in 2017 will also be negatively impacted:

However, these earnings headwinds aren't permanent. In the long term, United Technologies should see these things happen:

All told, once the company passes this period of transition, aerospace-related profits should grow strongly. Given that the stock trades at a discount to its peers, it looks like a good value.

Investors looking for a small-cap option might like Ducommun. The company generates half of its revenue from structural systems, including such diverse items as cargo doors, winglets, tail cones, and exhaust ducts. The other half comes from electronic systems, such as cables and wiring, circuit-board solutions, and integrated electronic solutions.

At the end of 2016, around 53% of Ducommun's backlog was in commercial aerospace, with 43% in military and space. However, it's the former that makes Ducommun exciting. Management expects long-term growth of 4% to 6% from its positions on aircraft such as the Boeing 737, 737 MAX, and 787 Dreamliner, and the Airbus A320, A320neo, A330, and A350, while military and space sales (Black Hawk helicopters, Tomahawk missiles) are expected to grow 0% to 2% in the long term. 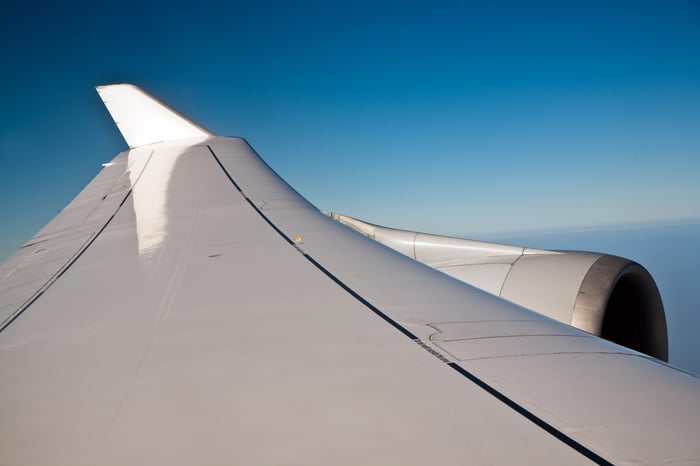 Moreover, Ducommun -- like United Technologies -- is also in transition. In the last year or so, management has aggressively restructured the company in order to prepare for future aerospace growth:

Ducommun is now a more streamlined company trading at an attractive valuation. Analysts expect flat earnings per share of $1.46 in 2017, with EPS growth of 37% in 2018. As the company invests in new facilities in order to prepare for growth, capital expenditures are expected to ramp up to a range of $22 million to $26 million in 2017, from $18.7 million in 2016; this will eat into free cash flow generation in 2017.

No matter: Ducommun is positioning itself on a strong long-term growth path. As Airbus and Boeing ramp up production on the aircraft that Ducommun sells into, investors can expect earnings and cash flow growth for years to come.

All told, United Technologies and Ducommun trade at attractive valuations; if you believe the aerospace industry is headed for long-term growth, then they are both worth buying. Both are facing some near-term headwinds that are holding back the headline numbers, but if you can look beyond this, they are both a good value.