A decade ago, many predicted that Barnes & Noble (NYSE:BKS) would bite the dust.

However, Barnes & Noble has endured thanks in part to diversifying into toys and games, and benefited from the recovery in interest in physical books, which, contrary to popular belief, have not succumbed to their electronic counterparts. Today, even Amazon is opening retail bookstores. 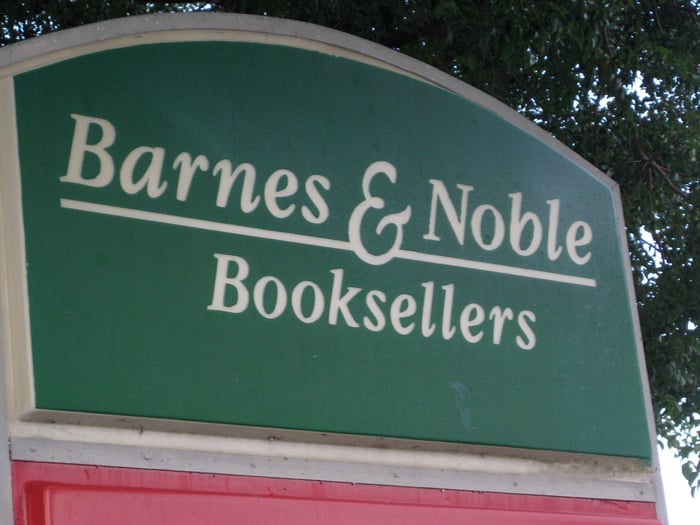 Shareholders that have stuck by the stock have not seen much growth, as it has essentially traded sideways since the recession; however, they have been rewarded with a juicy dividend payout.

The bookstore chain reinitiated its dividend in 2015 at $0.15 a quarter after suspending it four years earlier, and has maintained it since. The decision to start paying dividends came after the company spun off the college business. Today, that payout is good for a 6.7% yield.

However, there are a few reasons why that dividend may not be around forever.

1. The business continues to struggle

After gaining a virtual monopoly over the bookselling industry, Amazon has moved on to bigger things like taking over the entire retail industry. Customer traffic is down at malls and shopping centers as more Americans shop online, and that trend is continuing to pressure retailers like Barnes & Noble.

In its most recent quarter, comparable store sales plunged 8.3% due to lower traffic as well as a decline in coloring books, art supplies, and albums. Online sales increased just 2.2%, and the NOOK e-book division continued its rapid decline. The company also revised its full-year comparable store sales guidance to a 7% decline.

Despite the weak sales performance, effective cost-cutting meant that earnings per share through the first three quarters of the year were flat at $0.48. Still, declining sales at its stores is a worrying sign. If that pattern continues, profits will eventually fall as well.

Dividends can be funded by profits, cash on the balance sheet, or debt, but of those three, only funding with profits is sustainable. Through the first three quarters of the year, Barnes & Noble paid out nearly all of its profits in dividends, with $0.45 per share in dividends and $0.48 in earnings per share. That gives it a payout ratio -- the percentage of profits it spends on dividends -- of 94%.

However, those figures are skewed because of high profits in the holiday period. During the fourth quarter, analysts expect a loss of -$0.23 per share, meaning the company would have a full-year profit of $0.25, giving it a payout ratio of 240%, which is unsustainable.

Over the past year, the company's cash balance has fallen from $63.6 million to $11.6 million, while other assets on its balance sheet remained essentially the same. While larger companies have tapped the debt markets to fund dividends and share buybacks, taking advantage of low interest rates, Barnes & Noble is in a much different position with thin profits and an uncertain future.

Barnes & Noble could take on debt to continue funding its dividend, though that seems like an unwise move. If the underlying business does not improve soon, the company will likely have to slash or even suspend its dividend.