Please ensure Javascript is enabled for purposes of website accessibility
Log In Help Join The Motley Fool
Free Article Join Over 1 Million Premium Members And Get More In-Depth Stock Guidance and Research
By Reuben Gregg Brewer - Apr 25, 2017 at 9:49AM

After a lot of headway, copper and gold miner Freeport-McMoRan is again facing headwinds... but the worst is already priced in.

Copper and gold miner Freeport-McMoRan Inc. (FCX -0.20%) made a bold and ill-timed move into the oil industry. That's been a heavy weight on the stock for several years that's just starting to lighten up. And just as the forecast began to brighten, Freeport is dealing with troubles at one of its largest mines. Assuming things get worked out with that copper and gold mine, however, the outlook can only get better.

In 2013 Freeport-McMoRan bought McMoRan Exploration Co. and Plains Exploration. That deal had a huge impact on the company's balance sheet, increased long-term debt from $3.5 billion to $20 billion in just one year. At the time oil prices were high and it seemed like a decent diversification move. But when oil prices fell in mid-2014 the company's materially increased debt load suddenly became a big issue. 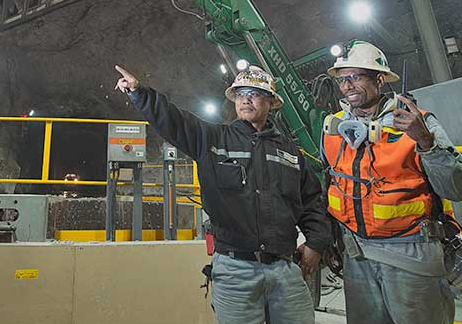 A lot has changed over the last year or so. The big number is a roughly 40% reduction in debt in 2016, which was accomplished via non-core asset sales and equity issuances. However, hidden under this news is the fact that Freeport has been able to offload some of its oil assets. So not only is the company reducing debt, but it's also been able to fine tune the oil business that's been weighing on the shares.

So, on this side of things, Freeport has been making great progress. And the future would, indeed, look relatively bright if it weren't for Indonesia.

Dealing with a rule change

In early 2017 Indonesia announced that it was changing some rules around mining, something that essentially resulted in Freeport's Grasberg mine having to start the process of shutting down. It's a complex political and social issue that has dragged on for months. And it helps explain why Freeport's shares are down over 27% from their early year peak while Southern Copper, another major copper miner, is down just 11%. 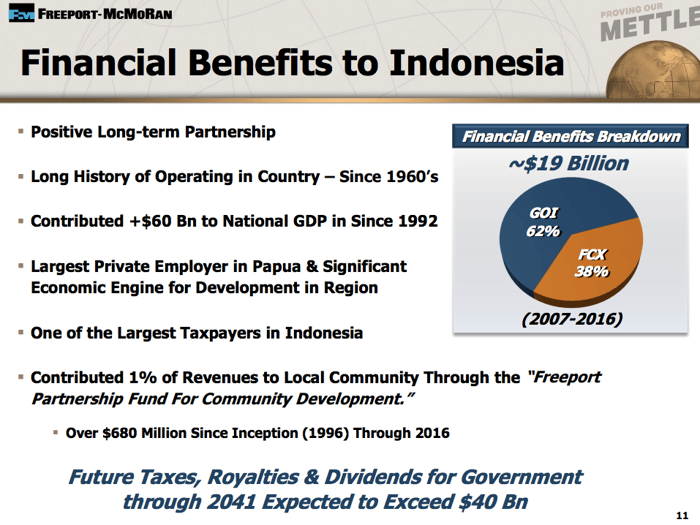 Both Freeport and Indonesia benefit when Grasberg is up and running.  Image source: Freeport-McMoRan Inc.

In fact, Freeport is down even more than Vale, which is dealing with the costly fallout from a mine disaster. The decline that Freeport has experienced makes sense, though, because Grasberg is an important asset for the company. This one mine represents nearly a third of its copper reserves and virtually all of its gold reserves.

But if you step back from the brink for just a moment you'll quickly see that a worst case scenario is unlikely. Why? Because if Grasberg isn't operating both Freeport and Indonesia lose out. Simply put, this standoff is bad for everyone and the optimist in me says it's likely that they'll come to some agreement. My guess is that neither side will be fully happy, but that the mine keeps running. And that will remove a major headwind for Freeport's business and shares. 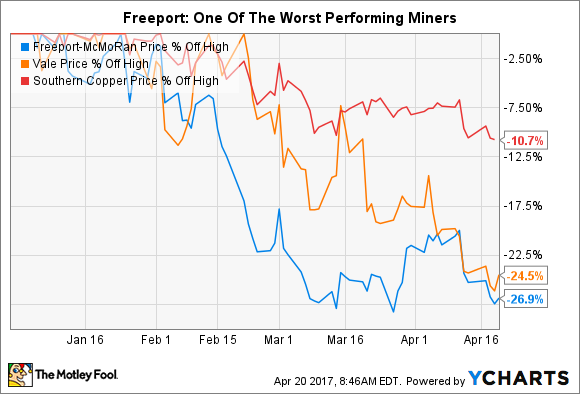 Freeport-McMoRan is in significantly better financial shape today than it was just one year ago. That positions the miner well for stronger results in the future... if only it wasn't dealing with the Grasberg issue in Indonesia. Problems at that mine have helped push the stock down nearly 30% from its early year highs, easily making it one of the worst-performing miners. In other words, it looks like a lot of bad news has already been priced in.

However, since it makes financial sense for both Freeport and Indonesia to work "something" out, it's likely that Grasberg will, eventually, blow over. And when it does, Freeport will be able to take advantage of its hard-won financial overhaul and start putting up better results. It takes a leap of faith right now to see that bright outlook, but if you are an aggressive investor with a glass half full outlook on life, it looks like the best is ahead because, well, it couldn't get too much worse.