The company is looking to the growing cloud-computing market and the transition from LED to OLED displays to drive growth this year.

Applied Materials ( AMAT -0.45% ) makes equipment that allows companies to manufacture semiconductors, displays, and other components for some of the most advanced technology on the planet. And just like other tech companies, Applied has to stay ahead of new trends so that it can provide the latest equipment to its customers.

Based on the company's own earnings calls and new trends in the tech space, it's becoming increasingly clear that both cloud computing and the transition from LED to OLED displays in smartphones will probably be two key growth opportunities for Applied. So let's take a quick look at what the company's doing in these markets and how it could benefit. 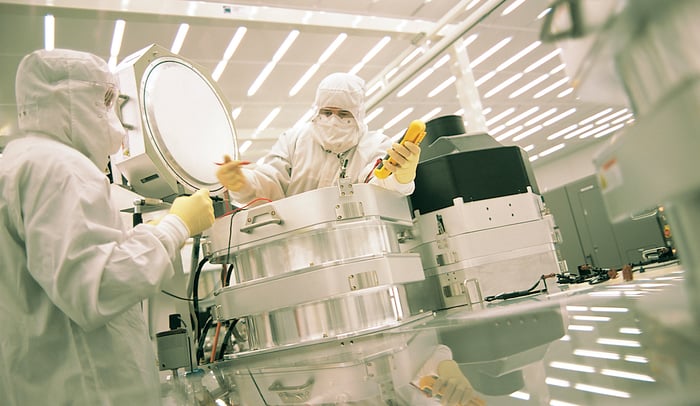 Let's start with the massive cloud-computing market and Applied's opportunity in it. Applied CFO Bob Halliday said on the company's earnings call back in February "our customers will continue to benefit from making big investments in leading-edge capacity to power devices and the cloud."

He went on to describe that cloud computing is creating huge value for industries such as advertising, retailing, transportation, and travel, and that companies in these markets will need to make "massive investments" in processors, memories, and displays as a result. Halliday indicated that this could be a very good thing for Applied's growth, saying, "I see a very healthy future in this for Applied Materials."

Halliday's viewpoint is more than a hunch, though. Gartner estimates that cloud-computing spending will total $1 trillion between 2016 and 2021.

And while cloud-computing spending ramps up, Applied is already benefiting from another growing market: display technologies. Many tech companies are are transitioning from LED displays to OLED ones for things like televisions and smartphones, and it's creating a massive opportunity for Applied.

The company's CEO, Gary Dickerson, said on Applied's first-quarter 2017 earnings call that 50% of its OLED equipment demand is coming from new customers in the mobile space. Dickerson noted that the current growth in OLED is increasing the company's total addressable market.

"We have talked about tripling our served market as we go forward, and certainly as these new technologies like OLED or flexible OLED are adopted, that increases our total available market," he said.

Applied thinks its customers will invest an additional $2 billion in display equipment this year and that even after this increased investment, the smartphone industry will only be at a 55% adoption rate for OLED. In short, there's much more where that came from.

Investors should have confidence that the company will be able to follow through with its display-equipment ambitions, considering Applied has managed to grow display revenue by about 20% annually since 2012 and because of its leading position in semiconductor manufacturing space. Morningstar analyst Abhinav Davuluri said that investors should expect the company's revenues to grow by double digits in fiscal 2017 -- and I think that at least part of that growth should come from the company's potential in OLED displays and the broader cloud computing market.

Here's Why You Should Buy This Explosive Growth Stock Before Earnings

Buying This Growth Stock Right Now Is a No-Brainer