The Un-carrier added more than 1 million customers in the first quarter as it continues to close the gap with industry titans Verizon and AT&T.

T-Mobile US (TMUS -0.04%) reported first-quarter results on April 24. The No. 3 U.S. wireless carrier is winning new subscribers at an impressive rate, prompting it to raise its growth forecast for the year ahead. 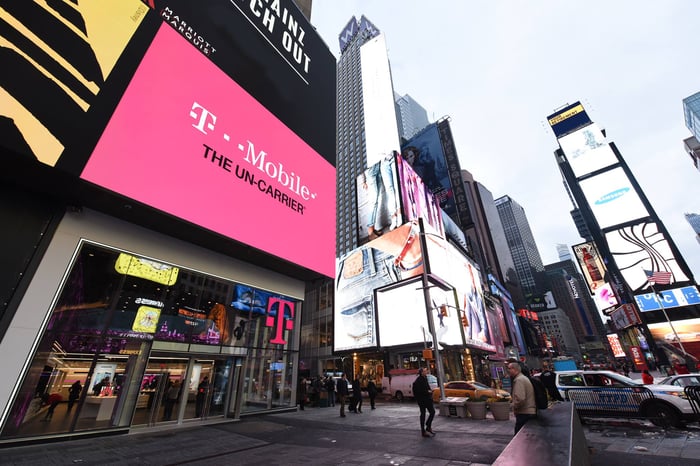 "We've been beating up on the competition for over 4 years now while making wireless better for consumers," said CEO John Legere in a press release. "Q1 was no different with T-Mobile again producing the best customer and financial growth in the industry."

T-Mobile added 914,000 total postpaid subscribers -- who pay traditional monthly bills and are typically the most sought-after customers for wireless carriers -- during the quarter, including 798,000 net postpaid phone customers.

T-Mobile expects these figures to lead the industry for the fifth consecutive quarter -- a particularly impressive feat considering that both Verizon Communications (NYSE: VZ) and AT&T (NYSE: T) began offering unlimited data plans in February to better compete with T-Mobile. Yet these moves have not stopped Verizon and AT&T from bleeding wireless subscribers. And many of these customers are choosing T-Mobile as their new carrier.

Together, T-Mobile's subscriber growth and greater ARPU helped to fuel an 11% increase in total revenue, to $9.6 billion.

Additionally, earnings before interest, taxes, depreciation, and amortization (EBITDA) -- adjusted to exclude stock-based compensation, as well as gains related to the sale of spectrum licenses and other non-recurring items -- rose 21% to more than $2.6 billion.

These positive trends encouraged T-Mobile to raise its 2017 customer growth forecast to a range of 2.8 million to 3.5 million branded postpaid net additions, up from prior estimates of 2.4 million to 3.4 million.

Management also reiterated its guidance for adjusted EBITDA of $10.4 billion to $10.8 billion and capital expenditures of $4.8 billion to $5.1 billion.

Looking out even further, T-Mobile remains confident in its ability to grow its operating and free cash flow at annualized rates over the next three years of 15%-18% and 45%-48%, respectively.

"We can take the Un-carrier to every corner of the United States, bringing real choice and competition to wireless customers in every part of the country," added Legere during a conference call with analysts. "I've never been more confident about the future at T-Mobile as we look ahead to the remainder of 2017 and beyond."