Yet monetizing that increased usage remains a challenge.

Beleaguered micro-blogging service Twitter (TWTR 2.68%) reported first-quarter results earlier this morning, and overall investors are rather pleased; shares rose as much as 12% today.

Revenue in the first quarter came in at $548 million, down 8% from a year ago, which translated into non-GAAP net income of $82 million, or $0.11 per share. That represents Twitter's first reported decline in revenue, which isn't entirely unexpected, but the drop was much more modest than previously anticipated.

Daily active users (DAUs) increased 14% year over year, but there's not much context to that figure since Twitter won't disclose absolute DAUs. In terms of monthly active users (MAUs), Twitter just put up its strongest sequential increase in years. 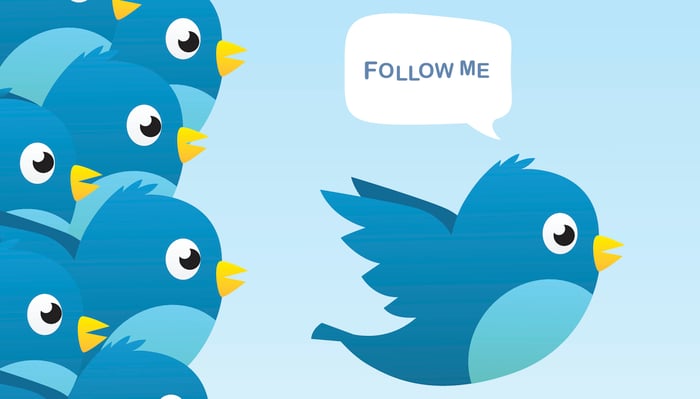 There are now 328 MAUs worldwide, up 9 million sequentially. After years of malaise and stagnating user growth, Twitter has finally notched a meaningful bump. 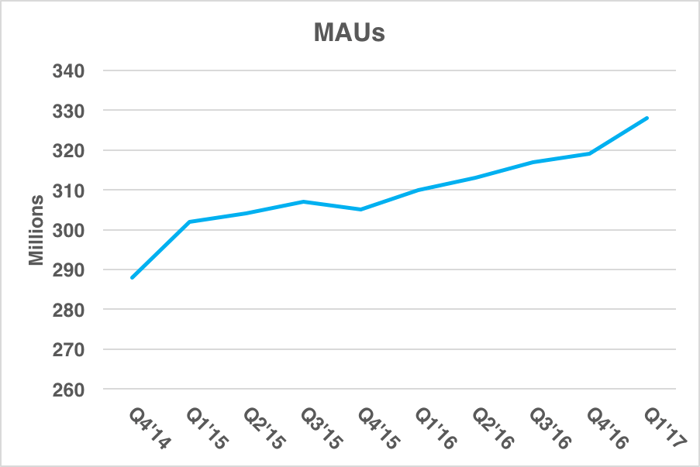 This is the strongest sequential addition in two years, after the company reported 14 million in sequential MAU additions in Q1 2015. 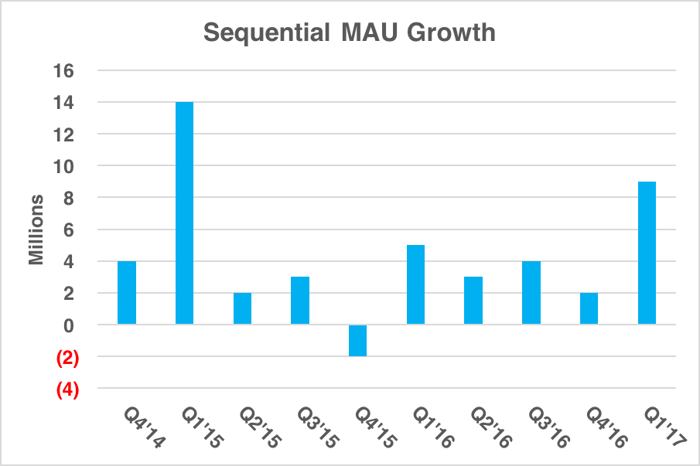 A year ago, Twitter said it would begin exploring changes to how it displays tweets. Specifically, Twitter was pursuing a Facebook-esque strategy of algorithmic curation, beyond the historical method of only displaying tweets in reverse chronological order. The move sparked backlash among Twitter enthusiasts, who started a #RIPTwitter hashtag and feared the platform would just become "Facebook 2.0."

Here's the rub: It's working. Of course, the underlying purpose for such a change is to increase the relevance of tweets, which can improve engagement across the platform, so it's a little unclear why users initially responded so harshly to the idea; shouldn't all users prefer more relevant content? On the earnings call, CEO Jack Dorsey made it clear that the change is helping:

And the biggest change we made last year was changing the timeline to be more relevance ranked instead of strictly reverse chronological, and focusing on the timeline continues to produce results. So by focusing on the timeline, we are displaying a broader set of tweets now from a person's network, and we're applying more deep learning models to make sure we're showing more relevant tweets first. The other area we've been focusing a lot of our attention on is notifications and making them a whole lot more relevant.

Increased political engagement, in part driven by our Tweeter-in-Chief, is also helping, according to COO Anthony Noto:

There also is some evidence that we benefited from our new and resurrected users following more news and political accounts in Q1, particularly in the U.S. That's a really positive thing. As you know, we believe Twitter is the best at showing you what's happening in the world and what's being talked about, and having the political leaders of the world as well as news agencies participating in driving that is an important element to reinforcing what we're the best at.

It's clear that Twitter continues to struggle with figuring out how to monetize all the increased engagement, especially in its most important market, the U.S.; domestic engagement metrics look strong, but domestic ad sales are declining rapidly. The fact that mediocre financial results can cause shares to rally this much goes to show just how low the bar is for Twitter.