Alcoa Corp. (NYSE:AA) reported first-quarter earnings that looked better than they really were. But even after taking out a one-time gain, the global aluminum maker has clearly made important progress on key goals since it separated from Arconic Inc. late last year. Here are some of the things you need to understand from the company's most recent results.

The headline number for Alcoa's first-quarter earnings was $1.21 per share. That was a notable improvement from the loss of $0.68 in the final stanza of 2016, the company's first as a stand-alone company. It was also much better than the pro forma figure of a $1.15 loss in the year-ago period. 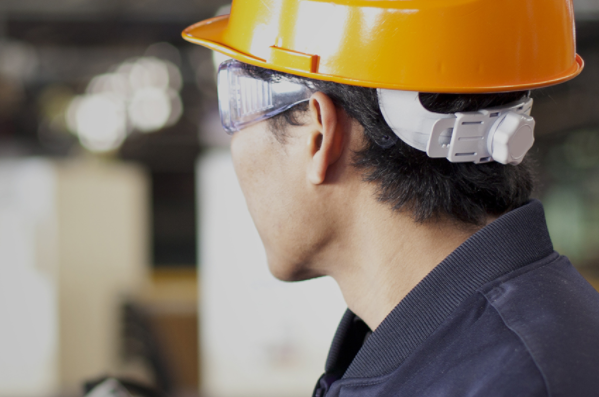 But the first-quarter number wasn't what it seems because of a one-time gain from an asset sale. Earnings came in at $0.63 a share once adjusted for that. And the fourth quarter, adjusted for one-time items, came in at $0.14 a share. So it was a solid first quarter, helped along by rising aluminum prices, but it wasn't the blowout that it might at first appear to have been. It's reasonable to expect more noise as management navigates through its first full year as a stand-alone company.

That, however, doesn't mean that positive steps aren't taking place, because they are. For example, one of management's key focuses is cost-cutting. On that front, SG&A and research and development expenses fell 20% sequentially from the fourth quarter.

There's likely to be more improvement here, too, because Alcoa has merged six business units into just three. The hope is that it will allow the company to trim costs and increase synergies across the business. It is also shutting eight offices around the world and consolidating those functions into the Pittsburgh office. Management expects to save around $5 million annually with this move. Although the top-line number gets the headline, the little things that management is doing underneath are important as well.

That includes dealing with the company's debt, which is a reasonable 20% (or so) of the capital structure, excluding non-controlling interests. The aluminum maker's cash balance was $800 million, down slightly from the fourth quarter. Clearly, Alcoa's balance sheet is in decent shape and management didn't do anything to change that situation in the quarter. However, the fly in the ointment are the company's employee retirement obligations, which stand at nearly $3 billion combined. 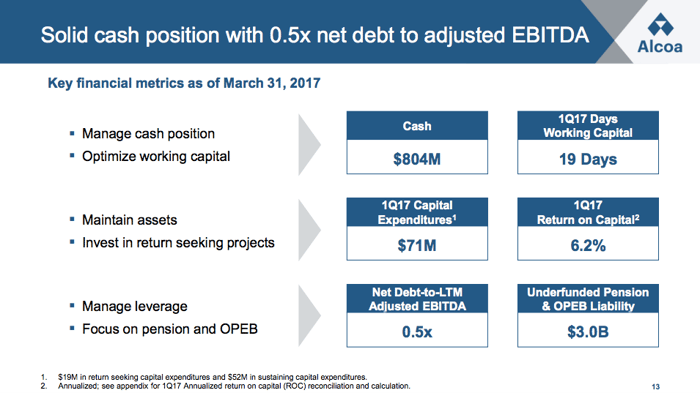 Alcoa is being conservative with debt because it has big pension obligations.  Image source: Alcoa Corp.

The company's pension and other post retirement obligations aren't going away anytime soon. So its conservative approach to debt is something you'll want to watch closely. One quarter doesn't make a trend, but it is nice to see that Alcoa is living up to its promise to be careful with its balance sheet. That's particularly true since the first quarter for Alcoa is a seasonally weak one in terms of cash flow.

At the end of the day, there are two real takeaways from Alcoa's first-quarter earnings. The first is that 2017's results are likely to be a little difficult to read because of the late 2016 breakup of "old" Alcoa. But that's not surprising since 2017 is really best looked at as a transition year. The second is that, despite the haze, Alcoa appears to be making progress on the goals it's set for itself, and that is very nice to see. You will, however, want to keep an eye on things to make sure the trend continues.