The medical supply company turned in another outstanding quarter.

It's best to look at the income line on a adjusted basis since the year-ago quarter contained a $3.2 billion gain as Baxter got rid of its shares in its spinoff Baxalta. The 4% increase in revenue doesn't look that great, but it includes the impact of foreign exchange, generic competition for the U.S. cyclophosphamide market, and products that Baxter has stopped selling because they weren't profitable enough. Excluding those items, revenue was up a more respectable 7% year over year.

The revenue growth came from Baxter's hospital products, which grew 7% year over year as the company sold more IV therapies and the tubes and components used to deliver IV fluids. Sales of Baxter's renal products grew just 1% year over year.

Despite the relatively small increase in revenue, Baxter was able to increase earnings substantially by reducing costs. Increased gross margins and lower spending on sales, general, and administrative expenses helped boost adjusted operating margin to 16.4%, an improvement of 590 basis points versus the year-ago quarter. The adjusted earnings of $0.58 per share exceeded management's guidance of $0.50 to $0.52 per share.

Outside of the quarterly numbers, Baxter announced an exclusive strategic partnership with ScinoPharm Taiwan to bring five generic injectables used in cancer treatments to market, with an option to add up to 15 additional injectable drugs. 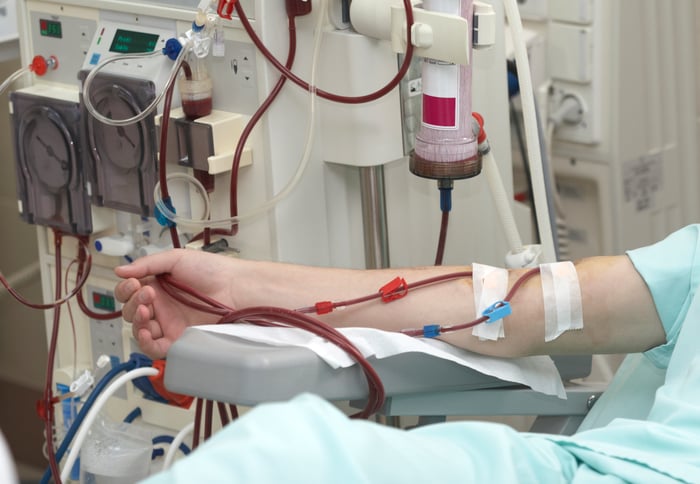 Chairman and CEO Jose Almeida was happy with the results, but it doesn't sound like he's resting on his laurels:

"Certainly, our business transformation efforts have been centered to margin expansion and we are by no means finished. We are pursuing several new fronts to accelerate these efforts, which we expect will generate incremental savings going forward, a portion of which we intend to redeploy back into the businesses to drive innovation and growth."

On the potential acquisitions to add growth, Almeida noted that the company will continue to do smaller tuck-in acquisitions, but he also feels Baxter could handle a larger one:

"I feel more confident that Baxter could do a 20%, 25% of our market cap deal without a problem, OK? It doesn't mean that we're going to do it, but my confidence has increased in the management of the company in really pulling off something that would be a good deal for our shareholders in terms of bringing synergies to the bottom line and a good accretion to the top line."

After an outstanding Q1 that exceeded management's expectations, Baxter is raising its guidance and now expects 2017 sales growth of approximately 1% to 2% percent on a reported basis or 2% to 3% on a constant currency basis. Adjusted earnings for the year are expected to fall in the range of $2.20 to $2.28 per share, up from previous guidance of $2.10 to $2.18 per share.

For the second quarter, management is predicting flat sales on a reported basis, which translates to 2% growth on a constant-currency basis, with the earnings per share in the range of $0.55 to $0.57 per share.