Providing power to homeowners and businesses is important, and Generac Holdings (GNRC 4.19%) has successfully tackled that key task with its line of power generators. Over time, the stock has been volatile, typically rising when high-profile disruptive weather events cause massive power outages and then falling back during less turbulent times.

Coming into Thursday's first-quarter financial report, Generac investors were prepared to deal with falling earnings even though they anticipated good gains in revenue. Results were generally in line with what those investors expected to see, but the company thinks that the remainder of 2017 is looking favorable for the end users who buy its products. Let's take a closer look at Generac Holdings to see how the quarter went and what's ahead for the power equipment provider. 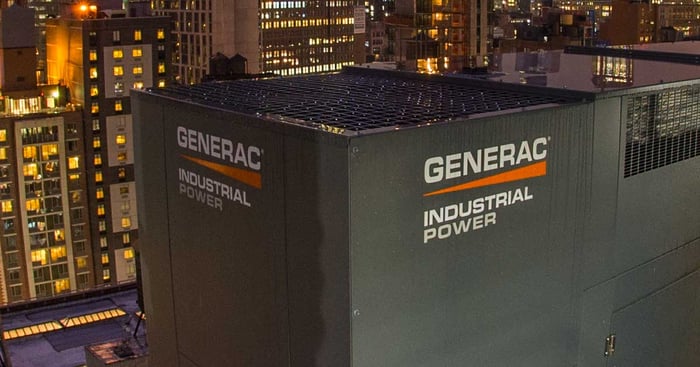 Generac fires up a mixed quarter

Generac's first-quarter results had good and bad news for investors. Revenue was up 16% to $331.8 million, which was roughly $10 million higher than the consensus forecast among those following the stock. However, although GAAP net income rose by more than a quarter from year-ago levels, adjusted net income of $25.8 million was down by a sixth. That produced adjusted earnings of $0.41 per share, which was roughly what investors were expecting to see.

Looking more closely at the numbers, the strength in Generac's performance came almost entirely from its commercial and industrial products division. Segment sales there climbed by nearly half, reflecting recoveries in some of the industries that buy the most power generation equipment from Generac. By contrast, the residential products division actually saw sales fall about 3%, and the other product class category was only able to manage a small 4% rise in its top line.

From a geographical perspective, Generac's results were again driven by the international acquisitions of Pramac and Motortech, as the company more than doubled the amount of revenue it brought in from overseas. Domestic sales inched higher by just a fraction of a percentage point, however, and adjusted segment operating profit domestically was down nearly 9%, compared to strong gains of nearly two-thirds for the international division.

Also encouraging was the fact that Generac kept a tighter rein on internal costs than it has in recent quarters. Operating expenses were up just 11%, lagging the rate of growth in revenue and therefore allowing operating margin figures to rise. Savings on interest expenses also helped contribute to bottom-line growth, although a large boost in tax liability ate into some of Generac's GAAP profit gains.

CEO Aaron Jagdfeld gave more color on how the quarter went for Generac. "Demand trends for domestic mobile products were much stronger," Jagdfeld said, "as our rental equipment customers began to replace and update their fleets." He noted that residential shipment volumes were initially slower than last year, which the company had expected, but European and Latin American markets were solid.

A lot of things are starting to go Generac's way. Jagdfeld pointed to the fact that higher power outages activity late in the first quarter has already led to substantial improvement in residential installation activity during the current quarter, and the retailers that sell Generac products have increased their promotional activity as well. Also, better conditions in end markets have shown the value of Generac's Powering Ahead diversification efforts, and the expansion of the company's scope should give it more potential markets to drive growth.

Generac repeated its guidance for the full 2017 year, saying it still sees sales growth of 5% to 7% this year, with organic sales rising 1% to 3% and acquisitions providing the rest of those gains. Margin figures are also expected to remain where the company expected them to be.

Investors didn't have an immediate response to the news, but in the long run, what matters most is that the company finds ways to keep up its growth pace. With international expansion efforts paying off, Generac appears to be on a good path toward a more powerful future.

Why Generac Stock Popped on Wednesday

Why Shares of Generac Holdings Are Tumbling Lower Today
405%