The hotel giant made an unusual move. Find out more about it.

Most companies like to do traditional stock splits, choosing to have a larger number of outstanding shares at a lower price to make the stock more accessible to small investors and to demonstrate the success of seeing share prices climb over time. Yet occasionally, companies need to do reverse stock splits, and that's what Hilton (HLT -1.48%) decided late last year that it was going to do. On Jan. 4, 2017, Hilton completed its one-for-three reverse stock split, but unlike many stocks that go through reverse splits, the reason for Hilton's move was far more positive. Here's what you need to know about the reverse split and how it affects you going forward.

Why Hilton did a reverse stock split

Hilton's reverse stock split was part of a much larger transaction that involved the breakup of Hilton Worldwide Holdings into separate parts. Back in February 2016, Hilton announced its intention to spin off its real estate and timeshare businesses in an effort to unlock the value of its shares. Under the plan of reorganization, Park Hotels & Resorts (PK 0.08%) was created to hold the portfolio of hotel and resort properties that Hilton Worldwide owned. At the same time, Hilton Grand Vacations (HGV -1.41%) would be the new holder of Hilton's timeshare business. 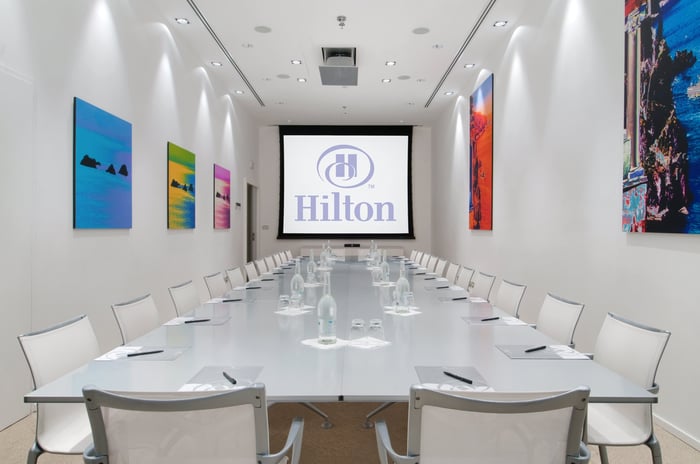 Following the spinoff, Hilton wanted to keep the value of its original company shares in the same range as it traded before the spinoff. The 1-for-3 reverse split was designed to accomplish that goal.

So at the end of the day, a shareholder with 300 shares of Hilton Worldwide would own the following positions:

How has Hilton done since the reverse split?

Interestingly, the three parts of Hilton's business have seen much different performance since the split. Park Hotels was the loser of the three, falling more than 10% as prospects for income-oriented real estate investment trusts have been poor in light of rising interest rates from the Federal Reserve. By contrast, the Hilton Grand Vacations company has done the best, soaring nearly 30% as investors celebrate better economic trends and greater interest in travel. The core Hilton business has been somewhere in the middle, with modest gains of around 5% that have trailed the overall market slightly over that timeframe. 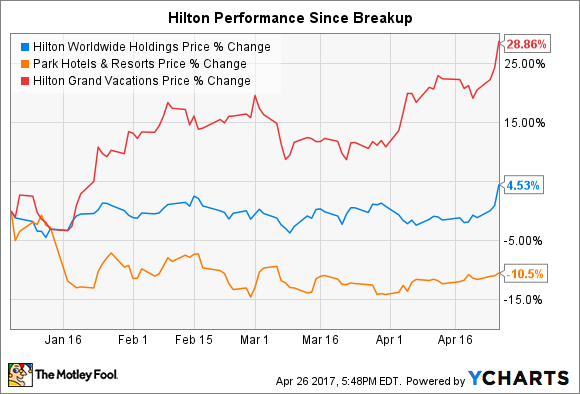 Yet that performance is exactly what Hilton would have wanted to see in deciding to break itself into different parts. Freeing the individual divisions to conduct their own business allowed each to pursue opportunities differently. The companies hope that separately, they'll produce better overall performance than they would have together, but the move has also allowed investors to vote with their feet and choose the parts of Hilton's former integrated business that they like the best.

Sometimes, companies that do reverse stock splits make the move because their stock has fallen to uncomfortably low levels. That's not the case with Hilton, and the hotel giant's decision to make this move was more about maximizing success than preventing failure. Going forward, investors shouldn't be surprised if all three pieces of the former Hilton pie end up doing well.