Here are a look at AutoNation's first-quarter results, insights into industry trends, and what Mike Jackson had to say about a potential competitive threat.

If you're an investor in major Detroit automakers, parts suppliers, or dealership groups, one of the best earnings calls to catch each quarter is AutoNation's (AN 1.35%). The nation's largest auto retailer sells a balanced assortment of luxury, domestic, and import vehicles, so its conference call gives a glimpse into industry pricing and overall health. The company also boasts one of the industry's most outspoken CEOs in Mike Jackson, who isn't afraid to call it as he sees it.

Starting from the top, AutoNation's first-quarter revenue checked in at $5.1 billion with gross profit of $820 million; both of those results were essentially flat compared to the prior year. Net income from continuing operations checked in at $98 million, or $0.97 per share, up slightly from last year's $96 million, or $0.90 per share. Compared to analysts' estimates AutoNation fell short on the top line, with consensus estimates calling for revenue of $5.31 billion, but beat on the bottom line, with analysts' estimates calling for only $0.91 per share.

AutoNation's income breakdown by segment was intriguing. Domestic segment income declined 21% to $61 million, which is a little surprising considering domestic automakers have increased their focus on more profitable and high-volume SUVs in recent years. On the flip side, AutoNation's import segment -- which typically relies on sales of passenger vehicles, which have fallen out of favor -- had a more tolerable segment income decline of 6%, to $72 million. The premium luxury segment income posted the smallest decrease of only 3%, down to $81 million.

New-vehicle sales revenue was flat compared to the prior year at $2.7 billion, which isn't surprising as the new-vehicle cycle has likely plateaued. AutoNation retailed 73,600 units, a 3% decline, and gross profit per new vehicle was $1,886, a $39 decline compared to the prior year. Used-vehicle sales revenue recorded a 4% increase over the same time period, up to $1.1 billion, but posted a large decline in gross profit per used vehicle: a decrease of $389, to $1,243. Some of that is due to AutoNation working through inventory that was previously on recall hold, but some of the weakness could be from the continued wave of vehicles coming off lease, which is expected to weigh on used-car prices. 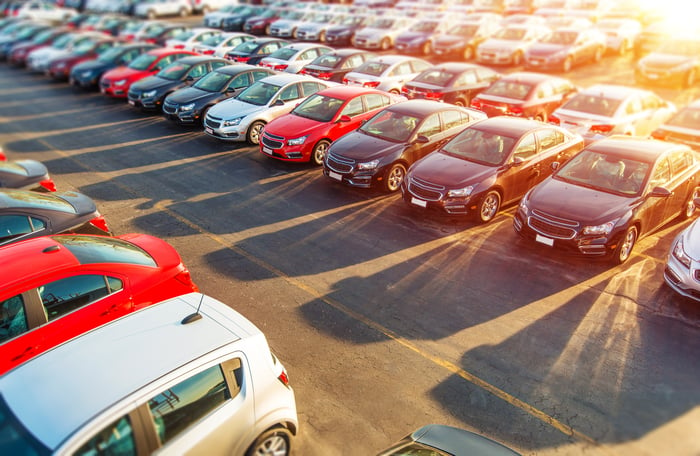 Another item of interest to investors in the broader automotive industry, as well as AutoNation investors, was that SG&A (selling, general and administrative expenses) as a percentage of gross profit was 72.6%, an increase of 130 basis points compared to a year ago. Management also believes that the percentage will remain above 72% for the year due to "disruptive" OEM marketing and sales incentives, and investments in AutoNation's branding. To sustain the strong profitability investors have become accustomed to in recent years, both automakers and dealership groups will have to continue to balance inventory and incentive spending.

What Mike Jackson had to say

As usual, Mike Jackson was good for at least one intriguing comment or useful insight into industry trends. On this quarter's conference call, it came in a response to a question regarding an upcoming IPO from Carvana, a company selling used cars online, enabling consumers to skip the dealership. Asked if he was concerned, Jackson responded:

... 99% of customers want to come to a physical place, examine the vehicle, have the right to change their mind to something else. On a price point that runs from 20- to 30-some thousand dollars, on average, between used and new, they want affirmation and confirmation that they've done the right thing; they want to test-drive, and they want to be able to change their mind. And here's one of the great ironies: They feel more empowered, in control, in a dealership than they do in their own driveway -- because it's awkward in their driveway when the car just shows up and they look at it and say, "that's not what I hoped for, how do I get out of this mess ... ?"

That's good news for investors wary of how digital trends have disrupted many different industries. I think he's correct: There's probably a gray area that dealership groups will need to find, such as completing some of the information-gathering process or financing information online, but there should always be consumer desire to see the product in a neutral location before opening the wallet on a big-ticket item.

Ultimately, there seems to be some pressure on new-vehicle sales and profitability, but nothing that is of huge concern to investors quite yet. If major automakers continue to find balance among supply, inventory, and incentives needed to move product, the industry should be healthy from just about any angle in the near term.