Please ensure Javascript is enabled for purposes of website accessibility
Log In Help Join The Motley Fool
Free Article Join Over 1 Million Premium Members And Get More In-Depth Stock Guidance and Research
By Reuben Gregg Brewer - Apr 28, 2017 at 9:50AM

Ferrellgas and WGL are both special situations, but one has pretty much all of the upside priced in.

Propane-focused Ferrellgas Partners, L.P. (FGP) is taking hard steps to work its way back from a series of ill-timed acquisitions. Investors have watched the units fall around 70% since it announced the overhaul. Natural gas utility WGL Holdings' (WGL) stock is up nearly 20% on news that it's going to be acquired by Canada's Altagas. Here's the thing: The better option today is probably the more troubled name.

A few years ago Ferrellgas Partners embarked on a diversification effort that involved the propane distribution partnership buying midstream assets. The logic behind the move was sound: diversify the company into the oil and gas midstream sector, an area that was growing more quickly than propane. 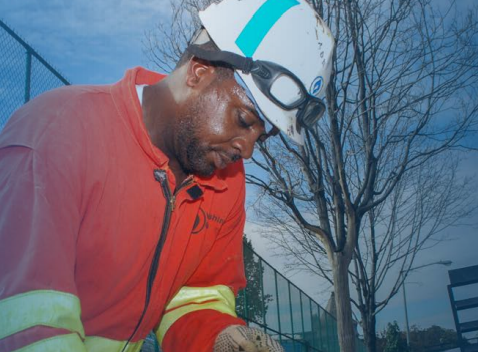 A series of acquisitions in the space increased debt from roughly $1.2 billion at the start of fiscal 2015, before the purchases, to nearly $2 billion at the start of fiscal 2017 (after hindsight had proven the initiative a mistake). That's an increase of around 66%. When the midstream business faltered at the same time that warm weather was depressing results in its core propane delivery business, Ferrellgas was forced to cut its distribution by a massive 80%.

There's no question that Ferrellgas has its work cut out for it at this point. Not only does it have to pay down its heavy debt load, but it still has to figure out how to salvage or jettison its troubled midstream business. It's not a pretty picture and it's only appropriate for special-situations investors willing to ride a workout.

But there are some good reasons to expect positive results. Notable among them is the fact that the founder is back running the partnership. He owns roughly 5% of the units. And then there's the company employee stock-ownership plan, which holds around 23% of the units. That's a lot of motivated employees who don't want to see Ferrellgas fail. Meanwhile, while the partnership's propane operation is suffering through a warm spell, it's a fairly stable business, overall, capable of throwing off much-needed cash. 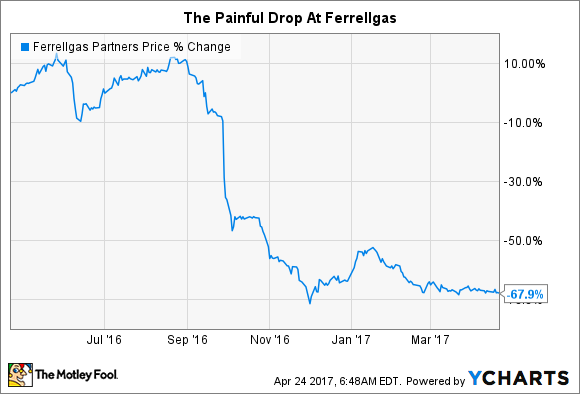 Fixing the problems at Ferrellgas is likely to be a slow and drawn-out process. But unitholders can collect the new, lower distribution while they wait, which because of a price drop equates to a 6.8% yield. It will take a strong stomach and watchful eye, but there's notable upside potential here from a mixture of capital appreciation and income.

WGL Holdings' business, meanwhile, isn't facing any material headwinds at all. In fact, when the natural gas utility announced first-quarter earnings, the news was all good. For example, year-over-year non-GAAP earnings increased 5%, the dividend was increased 5%, and the utility announced that it was increasing its guidance for 2017. So WGL is hitting on pretty much all cylinders.

The problem is that it's set to be acquired by Canada's Altagas for $88.25 -- in cash. That last little bit is the most important information, because it means that any investor who buys WGL today at around $82 a share is capped at an upside of around 7.5%. Any dividends received between now and the deal closing will add to that gain, but the yield is a fairly modest 2.5%, so the payouts are not going to add too much additional upside. 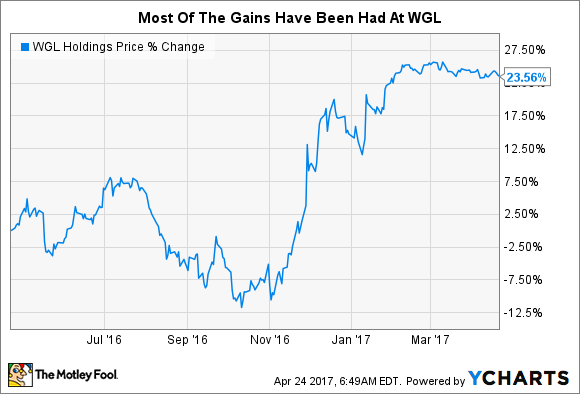 The downside, meanwhile, could be the reversal of the 20% gain since the rumors of a deal leaked out. To be fair, there's been notable interest in natural gas utilities, so another suitor would likely come along eventually. But until one does, a 20% loss is reasonable to expect if the WGL-Altagas deal falls through -- even though WGL is doing well right now. Unless investors are specifically into merger arbitrage (a complicated investment tactic that can involve long and short positions, as well as margin debt), the upside-downside proposition here isn't all that appealing right now.

A turnaround at Ferrellgas isn't a sure thing. The stock is, without doubt, a risky investment. And it's going to take a lot of hard work by a dedicated team of employees to straighten things out. Insider ownership of nearly 30%, however, suggests that there is a lot of dedication. After a massive unit price decline, it appears that there's more upside than downside here for more aggressive investors. You'll get paid a nearly 7% yield for sticking it out.

WGL, meanwhile, has limited upside because of an all-cash acquisition that's on the table. And if the deal falls through, there's a risk that the stock could fall as much as 20%. If you hold until the deal gets done, which could be a while because utility deals tend to be complicated, you'll only get a 2.5% (or so) yield. That's not an overly compelling story unless you are into merger arbitrage. If the uncertainty of a turnaround isn't too much to handle, more aggressive investors would probably be better off buying Ferrellgas.