If the company wants to fulfill its 2017 promise to investors, it still has to do this one thing.

Investors in Chevron (CVX 1.20%) are likely happy with the company's most recent earnings results: Production is up, costs are down, and capital spending is significantly lower as some major capital projects have come to fruition. This is some marked progress from the past couple years, when the company was struggling mightily with its ambitious spending plan.

As good as investors might feel about the progress Chevron has made recently, there are still some reasons investors should be keeping a watchful eye on Chevron's earnings for the rest of 2017. Here's a breakdown of its most recent results and what investors should be looking for in the coming quarters. 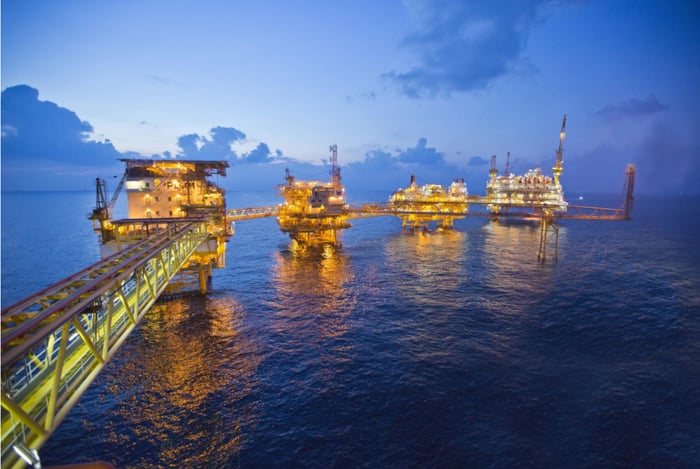 Of all the integrated oil and gas companies, Chevron's business is the most weighted toward upstream production. So as you might imagine, a return to $50 a barrel crude oil has been a nice salve for the income statement.

As is the case with any company as large as Chevron, there are some details within these earnings that are worth considering before reacting to the headline numbers. While that jump in earnings per share was a welcome sight, keep in mind that $600 million of those gains came from the sale of its Indonesia geothermal assets. If we were to pull out the gains from this sale, then Chevron's international upstream business segment would have been flat compared to the prior quarter.

The other little detail worth noting is Chevron's operational cash flow result. That $3.9 billion by itself isn't that encouraging considering that it generated similar results in the prior quarter with much lower revenues. There is a $957 million working capital build baked into that result, though. Large working capital builds in the first quarter like this are common for integrated oil and gas companies as they put their development plans in place for the year.

Looking at Chevron's various business segments, the obvious gains were in the international upstream and U.S. downstream. While those international upstream earnings are juiced a bit by asset sale steroids, U.S. downstream earnings were impressive since Chevron achieved them in what has been a weak operating environment for refiners as of late. A combination of lower operating expenses for its Richmond refinery turnaround, higher margins, and better chemical sales all led to the large gain. 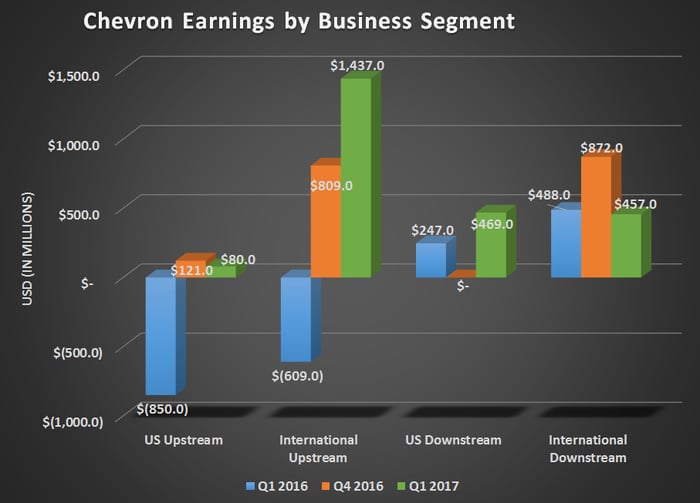 What happened with Chevron this past quarter?

CEO John Watson commented on the company's progress toward reigning in spending and completing its slate of major capital projects:

We continue to make good progress on reducing our spend. Our operating expenses were reduced by about 14 percent from first quarter 2016 and our capital spending declined over 30 percent from a year ago. We started up several new projects and have all three trains at Gorgon online. We also progressed our asset sales program. The combination of these actions contributed to a cash positive first quarter.

Overall net oil-equivalent production in the first quarter increased 3 percent compared to the 2016 full year, and we are on track to meet the 4-9 percent growth goal for 2017 before the effect of asset sales.

While some of Chevron's peers are realizing the benefits of their cost-cutting measures, replenishing their cash coffers, and green-lighting new projects, Chevron is still in capital recovery mode with significant asset sales and completing its existing suite of capital projects. Hopefully, it will realize those lofty production growth goals highlighted by Watson and finally close the spending gap. Management has assured investors this will happen this year, so be on the lookout to see if the company can pull it off.