There isn't much Cliffs can do to change the price of iron ore, but of the things it can control, it managed them well.

No matter how much a commodity company like Cliffs Natural Resources (CLF 5.10%) tries, its fate will almost exclusively be in the hands of commodity prices. In the case of this past quarter, Cliffs was dealt a tougher hand as iron ore prices declined again. That may be enough to get some investors to head for the hills, but there were also some very promising signs that the company is setting itself up for a better long-term future.

Here's a look at how the company performed this past quarter as well as why investors should be celebrating the moves management has made recently rather than fret too much about the current swoon in commodity prices.

To some investors, the sharp decline in profits compared to the prior quarter are no doubt discouraging. Lower realized iron ore prices coupled with higher cash costs will certainly put a damper on results. One thing to keep in mind, though, is that sales volumes are picking up fast. Total sales volumes increased 31% compared to this time last year, and management expects full-year sales to build throughout the year. As a result, the company is going to incur some higher-than-normal costs to bring some idle mining facilities back online. 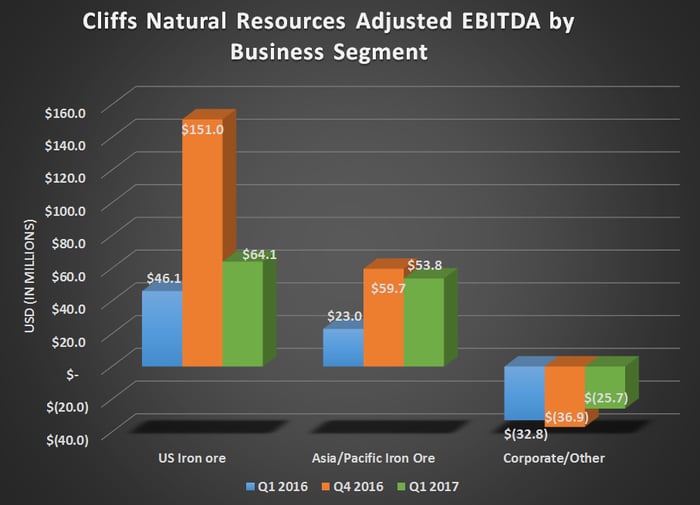 The other thing that stands out is the net income loss despite respectable operating income results. The reason for this is because the company made a lot of financial moves to shore up its balance sheet in the quarter:

As a result of these financial restructuring moves, the company incurred a $71.9 million loss on the extinguishment of debt. The trade-off, though, is that the company was able to reduce its net debt from $2.37 billion this time last year to $1.35 billion today. A one-time loss of less than $100 million for a $1 billion reduction in net debt seems like more than a fair trade-off.

CEO Laurenco Goncalves is known for being outspoken and perhaps even boisterous. In the company's press release, though, his statement was a little more muted than normal. Still, he touted the progress the company has made since he took the reigns:

During the first quarter, we put our finishing touches on what has been a remarkable operational, commercial and financial transformation of this company. Over the last two and half years, Cliffs has transformed itself into a lean and focused company, with a strong balance sheet and a lot less to pay in interest expense. This is particularly evident in our strong first-quarter results, which exceeded our expectations in revenues, EBITDA, and earnings per share. We expect 2017 to be a phenomenal year of EBITDA and free-cash-flow generation.

Considering the large reduction in guidance, perhaps calling 2017 a phenomenal year is a bit of an overstatement. Then again, the company appears to be doing all of the right things in the realms it can control (costs, production, etc.) and is merely updating guidance based on iron ore prices.

Iron ore prices were a little disappointing this past quarter, but you can't really blame Cliffs for that. The things the company has done to reign in spending and significantly reduce its debt load should be cheered, though. It wasn't that long ago that investors were legitimately worried this company was headed for bankruptcy. Today, its net debt to estimated 2017 EBITDA is a very respectable 1.9 times.

One thing investors have to keep in mind is that the decline in iron ore prices took years. So, chances are, the recovery isn't going to happen overnight. As iron ore prices globally get back to healthier levels over time, Cliffs will benefit immensely thanks to its lower-cost operations and less burdensome balance sheet.