ExxonMobil has done a commendable job of bringing its costs down in a declining oil price environment, but it needs to start thinking about growth again.

Investors have been hoping that 2017 would be a marked improvement over 2016 for ExxonMobil (XOM 1.98%) and other oil and gas companies. So far, Exxon is giving investors reason to believe that is the case. First-quarter profits more than doubled compared to this time last year, and the company has returned to strong cash flow generation.

For all the good things ExxonMobil has done for its investors, there is one thing suspiciously missing from its recent earnings reports. Despite billions in capital spending for growth, that hasn't exactly translated to higher production as of late. Let's take a look at the company's most recent results as well as what the company has been up to that could alleviate this issue. 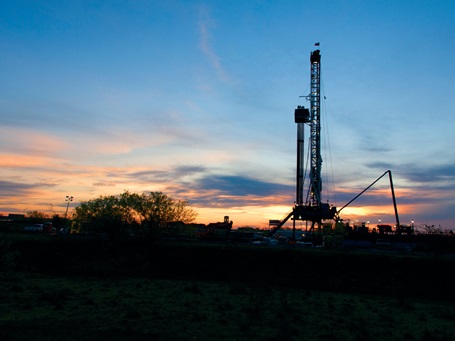 With a company the size of ExxonMobil, some things are bound to go well while others stumble. One thing that will certainly impress investors is the cash flow results. Cash flow from operations was enough to cover both capital expenditures as well as dividends to shareholders. So far, ExxonMobil has been the only big oil company that can claim that feat without including either asset sales or using scrip dividends in lieu of cash. That is certainly something to celebrate.

The largest gains in earnings and cash flow came, of course, from the upstream side of the business. ExxonMobil's U.S. upstream operations are still running at a loss, but just barely as Q1 losses were pared to just $18 million versus an $832 million loss this time last year. The international upstream earnings, though, produced a solid $2.27 billion in earnings.

Those U.S. upstream results are one of the discouraging points for the quarter. The company recently planted its flag in the Permian Basin with a major acreage purchase there, and management has said that growth in shale -- mostly in the Permian -- is a core pillar of its production growth strategy. If the company is still struggling to turn these operations into profitable ventures at the $50 a barrel range, when many others have been able to do so in the lower 48, investors may have to start to question if the company can generate a desirable return on these assets.

Earnings for its downstream and chemical units were a mixed bag. Downstream was down sequentially because of some asset disposals and some planned turnaround maintenance, while Chemical was up sequentially on higher margins and lower operating expenses. 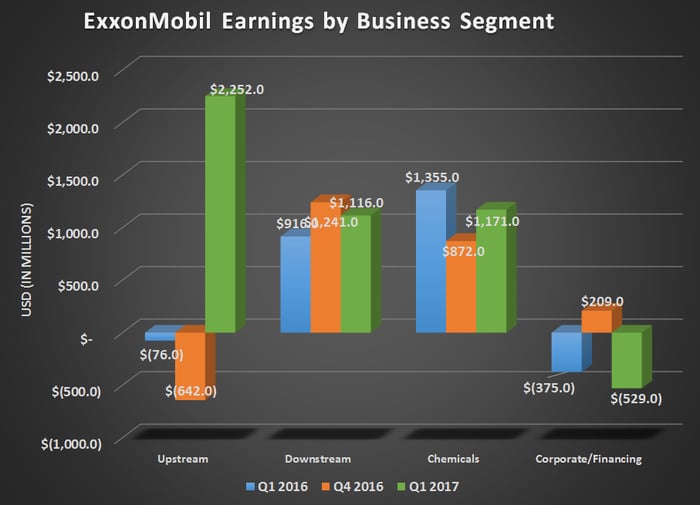 What happened with ExxonMobil this past quarter?

Perhaps it's part of the change of leadership from Rex Tillerson to Darren Woods, but one thing noticeably different on ExxonMobil's most recent conference call was the amount of color Jeff Woodbury -- president of investor relations and secretary -- gave when responding to questions. When asked about ExxonMobil's outlook for oil supply and demand in short to near term, Woodbury shook off his traditional Bill Belichick post-game interview responses with this comment:

I would say that the macro would still indicate -- from an ExxonMobil perspective, still indicate the need to be cautious going forward. As we've talked in the past, underlying demand growth has been generally strong. We're seeing demand growth of about 1.4 million barrels a day, similar to last year. And that's above the 10-year average. As we would have expected, we're seeing a supply side response to supply and demand coming into balance. And we do see that non-OPEC volumes are growing, particularly driven by North America and specifically the unconventionals. And you think over the last recent period, unconventionals have grown to, round numbers, about 800,000 barrels a day, on trend to maybe 1 million barrels per day over a 12-month period. So I think it all indicates the importance of making sure that we are very thoughtful about the near- and longer-term macro environment.

On an OPEC basis, as you've seen, the OPEC has generally met their commitments. A little bit short, but they are demonstrating a level of compliance. But when you step back and look at the supply side is, I think, is the biggest issue in front of us. And that will be a function of so many elements, including the North American response that I talked about, but also economic growth and other variables. Remember, we still have, round numbers, about 600 million barrels in storage. And depending on what near-term prices do, that's going to come out at some point. So a lot of variables to think about, and that's what really underpins my comment about just being cautious.

There were some things worth celebrating this past quarter, but there were also some lingering questions about the company's future. The return to strong cash flow generation that covers all of its obligations is a great sign of management's cost-cutting. However, the company has brought on a lot of projects lately with little to no production growth to show for it, and its big bet on American shale has yet to yield any positive results.

Hopefully, we will start to see the company address these issues. Management has a lot of irons in the fire today between its investments in the Permian Basin, Papua New Guinea, Guyana, and now Mozambique. As with anything ExxonMobil does, these things will take time, so investors will need to be patient.