The question that is on energy investors' mind nowadays is "when will oil and gas companies get back to pre-crash levels?" Well, for this one particular metric, Total (NYSE:TTE) is already back to those pre-crash levels.

Here's a quick look at the company's results, what it has done to get back to pre-crash levels, and what investors should be looking for in the coming quarters. 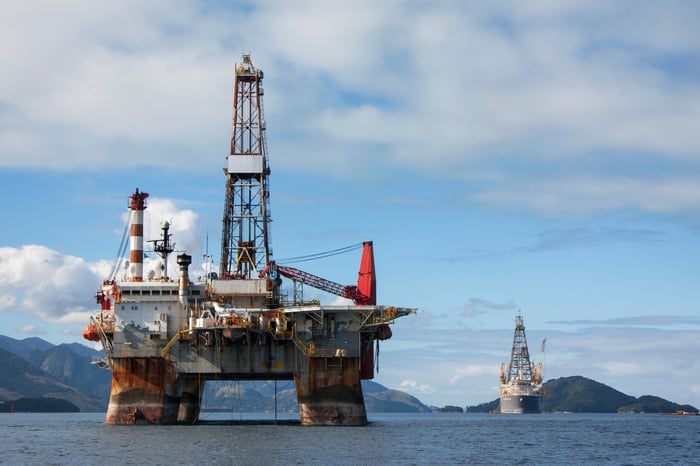 Investors have to be incredibly impressed with the results Total has been able to produce throughout this downturn. Thanks to some lucky timing of investments -- many of its largest projects came online between 2016 and 2017 -- and some drastic cost-cutting measures from management, Total has been able to produce Big Oil's best returns on equity. While Total's peers have yet to report, it seems that, based on these earnings, Total has set a high bar.

The one thing that may look a little off this quarter is the large drop in cash from operations from the prior quarter. This is a result of a $2.2 billion drawdown in working capital in the fourth quarter and a modest working capital build this past quarter. Eventually, these things all come out in the wash, so investors shouldn't worry too much about that.

What is more notable is that, according to one analyst at Citigroup, Total's free cash flow today is the same as its free cash flow was in 2013 when oil was at $100 a barrel. That, more than anything, is a testament to management's efforts to reign in expenses.

Looking at the business by its various segments, the most obvious gains came from the exploration and production side of the business. That was expected, though, as the average price for Brent oil increased from $33.90 per barrel this time last year to $53.70 per barrel in the first quarter. What is surprising is that refining and chemical earnings did not experience a sharp decrease. Refining margins in the U.S. have been noticeably weak for 6 straight quarters. This is less of a concern for Total because it has a limited refining and chemical footprint in the U.S.

Total also started breaking out its gas, renewables and power business as a separate segment. This is where the company holds its gas and LNG trading business as well as its investments in solar power. Management noted a weak environment for solar today. 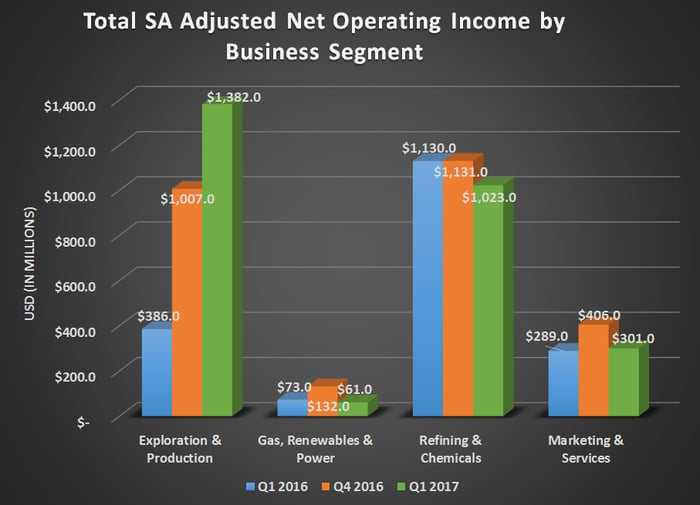 What happened with Total this past quarter?

On last quarter's conference call, CEO Patrick Pouyanne hinted that the company would start to step up its investment and acquisition activity as he sees an opportunity to take advantage of the lower cost for oil services today compared to the rising price of oil and gas tomorrow. Pouyanne reiterated this point in the company's press release:

[T]he net-debt-to-equity ratio decreased to 22.7%, notably due to the finalization of the $3.2 billion sale of Atotech, The strength of the balance sheet and relentless pursuit of cost reductions allows the Group to launch new projects and acquire resources while fully benefiting from the ongoing deflation in the oil sector.

Total seems to be one step ahead of its peers as of late. It was one of the fastest to lower its production costs; it has returned to a respectable return on equity considering the oil price environment; it has more or less restored its balance sheet to pre-crash levels; and today, it's getting ahead of the game with some aggressive moves to invest in new resources.

These high spend rates may cause a slight hit to cash flows in the short-term, but they are the right long-term move to make as they lock in lower cost service contracts as oil prices rise. For investors, that means results for the rest of 2017 could be muted but should make for a stronger company further down the road.