The cruise operator is about to reach the ambitious goal it set three years ago.

Shares of Royal Caribbean Cruises Ltd (RCL -3.40%) are getting pushed higher today after the company released first-quarter earnings that showed a nice bump in both cruise passengers and profitability. The stock rose 10% in early trading today.

Royal Caribbean posted sales of nearly $2 billion for the quarter, in line with analyst estimates and up about 5% year over year. However, earnings beat analyst expectations at $0.99 per share, more than double earnings per share (EPS) in the first quarter of 2016. Management also announced a newly approved $500 million stock buyback plan.

Royal Caribbean has tried to set itself apart in its industry with more interesting cruise experiences, which seems to be important now as onboard revenue growth outpaced ticket revenue growth. Royal Caribbean CFO Jason Liberty said in the release, "With consumers making the choice to spend more on experiences, our innovative hardware and superb onboard delivery is thriving." 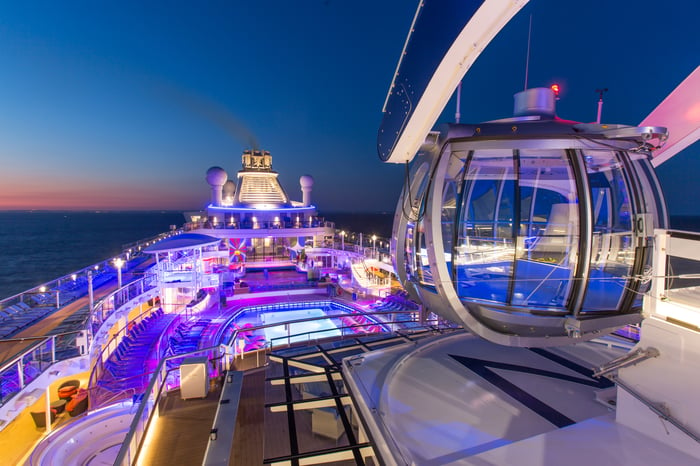 Royal Caribbean management announced an ambitious goal in 2014 -- to double its EPS and return on invested capital (ROIC) by the end of 2017 in a plan it called "Double Double." To reach that goal, Royal Caribbean needs to post EPS of $6.80 this year. After this strong first-quarter performance, management raised full-year EPS guidance to between $7.00 and $7.20 per share.

After a strong Q4 and full-year report in February as well, Royal Caribbean stock is now up around 34% so far in 2017, but it could still have plenty of room to grow since it is trading at less than 14 times forward earnings estimates.