It depends on where they live.

Happy customers are good for business. They buy more, stick around longer, and offer free word-of-mouth advertising that can attract new customers.

To this end, J.D. Power conducts an annual survey of retail banking customers in order to gauge whether they're satisfied with their bank. This year's survey is based on responses from more than 78,000 customers of the largest banks in the United States.

What does the survey say about Bank of America (BAC -0.42%), the nation's second biggest bank by assets? Its performance left a lot to be desired.

Bank of America's worst showings were in Florida, New England, and the Southeast. Its rating was 10 points below the average in each of these regions. 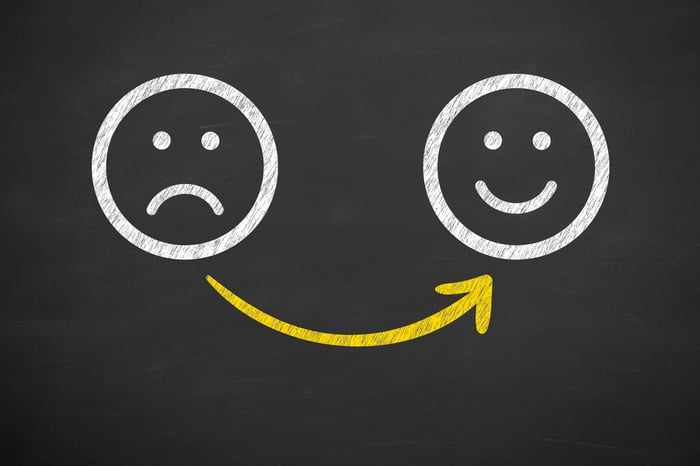 In most places around the United States, Bank of America isn't turning frowns upside down. Image source: Getting Images.

That aside, it isn't unreasonable to think that Bank of America's size plays a role in this, given consumers' long aversion to large banks, which was only made worse by the financial crisis.

The saving grace for Bank of America, and other banks with low customer satisfaction scores, is that customers don't tend to switch banks in the same way that they, say, stop going to a restaurant that provides bad service. It's simply too much hassle for most people to change banks given direct deposit and automatic bill pay, which is why banks encourage customers to set both of these services up.

This isn't to say that Bank of America's performance on the J.D. Power survey is irrelevant, because it's not. Satisfied customers are important for the reasons I pointed out at the top. Yet, because bank customers tend to be so sticky, remaining at their bank regardless of the quality of service, results like these have a nominal impact at most on a bank's bottom line, at least in the short-run.