Goldman Sachs believes that Advanced Micro Devices (AMD 2.67%) is going to face fierce competition from rivals NVIDIA and Intel, which will discount their products to defend their market share in graphics processing units (GPUs) and central processing units (CPUs). As a result, Goldman rates AMD a sell with an $11 price target.

There's no denying that NVIDIA and Intel dominate the GPU and CPU markets hands-down, with market shares of 70% and 99%, respectively, giving them the luxury to cut pricing and keep AMD away. As it turns out, Intel has already responded to AMD's latest Ryzen CPU with a price cut, with NVIDIA following suit.

Not surprisingly, AMD is looking at nascent opportunities where it can take a lead over its rivals to ensure long-term growth, and virtual reality (VR) is one such space. 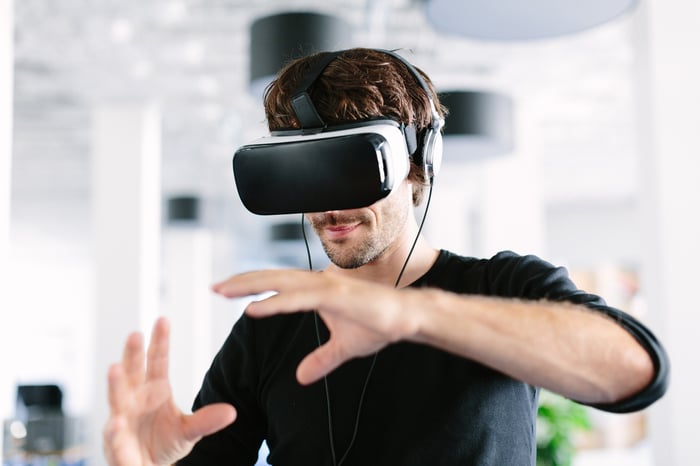 High-end VR headsets are currently dependent on bulky cables to stream content and draw power from desktop computers, limiting the user's mobility and tarnishing the VR experience. Nitero is trying to address this problem as it specializes in the 60 GHz millimeter wave radio technology that enables wireless device communication over short ranges.

As it turns out, a few companies are already working to make VR headsets wireless. TPCast, which is backed by HTC, believes that it can get wireless HTC Vive accessory to the market in the second quarter of the year. However, the bolt-on accessory could cost $249, adding to the price of an already expensive headset.

Nitero, however, could bring down the cost of making a wireless VR headset, since it's designing chips exclusively for this purpose, allowing it to deliver high-bandwidth data transfer with low latency (delays and time-lags). By comparison, other companies are tweaking existing solutions to fit this scenario, which is increasing the cost in the process.

AMD, therefore, aims to become the chip supplier of choice for next-generation VR headsets to enable wireless connectivity, which could substantially boost its revenue.

IDC estimates that VR headset sales could grow sixfold to 61 million units in 2020 from a projected 10 million units this year. AMD can take advantage of this opportunity by either making an add-on accessory that it can sell as an upgrade, or by making custom chips that are embedded in the headset itself.

A typical add-on adapter costs $250 at present, indicating that AMD's total addressable market could grow to $15 billion by 2020, according to the 61 million-headset sale forecast. But this isn't what AMD probably intends to do with Nitero's technology. It might either create its own chips or license the design to headset makers for a royalty, though it's difficult to gauge the size of this opportunity.

But AMD investors shouldn't forget that it will run into stiff competition from Qualcomm, which recently announced a VR development kit that's focused on providing an "un-tethered" experience.

Qualcomm is looking to reduce the go-to-market time of headset manufacturers through its VR development kit and the head-mounted display accelerator program by giving them access to all the important hardware tools. The kit consists of a Snapdragon 835-powered headset that also includes memory chips, audio chips, and connectivity chips, indicating that it's trying to corner a greater share of the market for itself.

But the VR opportunity is a huge one, and it can definitely accommodate more than two players, as different companies are trying to attack different aspects of the market. AMD, for its part, is doing the right thing by focusing on the wireless-chip opportunity, as the gradual move toward cordless VR headsets can give its business a nice boost.